Before there was Dear Evan Hansen or Fun Home, there was Next to Normal. Tom Kitt and Brian Yorkey’s 2010 Pulitzer Prize winner about mental illness arguably marked the beginning of the shift in American musical theatre toward dark, difficult subjects, including depression, suicide and grief. It’s a powerfully original work that Toronto has already seen a few times, but one that needs no excuse for a new production.

That said, the Musical Stage Co. has given us added incentive to see it again with a fresh conception that recasts its middle-class suburban family, the Goodmans, with non-white actors and switches the gender of a secondary character. Mental illness is a problem that cuts across all boundaries – race, culture, class – and that message is implicit in the casting choices.

The artistic payoff for this colour-blind revival, now playing at the CAA Theatre, is that we get a marvellous Ma-Anne Dionisio of Miss Saigon fame in the role of Diana Goodman. As Diana, the wife and mother beset by what might be bipolar disorder, Dionisio performs with so much intensity and emotion that you often feel as if you’re inside Diana’s restless skin, being crammed with mood-stabilizing medications or zapped with brain-jolting electricity.

Indeed, the production – the finale of the Off-Mirvish season – is such an emotional workout that you leave the theatre feeling wrung dry. It may be a bit too much. To steal a sentiment from Diana’s great antidepressant power ballad, I Miss the Mountains, I miss the laughs, the lighter moments Kitt and Yorkey have built into their piece. Director Philip Akin fails to make full use of them to give us occasional relief from the huge feelings that flood the stage.

I say Diana might be bipolar. That’s only the diagnosis of one of her doctors and Yorkey and Kitt, careful not to claim expertise themselves, allow her illness to remain indefinite, even as they delineate both the benefits and drawbacks of her various treatments. What is clear is that Diana has been suffering mental breakdowns for the past 16 years. It has left her supportive husband Dan (Troy Adams) at a loss and alienated her teenage daughter Natalie (Stephanie Sy).

As Dan arranges for Diana to see yet another psychiatrist, a reputed rock star among shrinks ironically named Dr. Madden (Louise Pitre), neglected Natalie starts to do her own self-medicating with mom’s discarded drugs. She’s lucky to have boyfriend Henry (Nathan Carroll) – a sweet, wholesome stoner whose own preference is for cannabis – looking out for her.

At the root of Diana’s illness is another young man, Gabe (Brandon Antonio), her son and seemingly the golden boy who has eclipsed Natalie in her affections. But as we learn early on, Gabe is not what he appears to be. I won’t spoil the plot for newcomers but let’s just say that Gabe becomes the voice of his mother’s madness at its most seductive and dangerous.

The opening ensemble number, Just Another Day, isn’t as manic or amusing as it should be. But by the time we get to Dionisio’s crystalline performance of I Miss the Mountains, early in Act 1, she and the show have kicked into gear.

She’s searing in her attack on Adams’s well-meaning Dan, You Don’t Know, and vibrant with panic as she faces a dose of dreaded electroconvulsive (i.e. shock) therapy in Didn’t I See This Movie? – a song that finds lyricist Yorkey at his most glib, name-checking all the asylum horror stories (One Flew Over the Cuckoo’s Nest, The Bell Jar, Frances Farmer) of popular culture. At other times, Dionisio – who seems to have scarcely aged since she starred as Kim in the 1990s Canadian production of Miss Saigon – brings an aching fragility to the role.

Adams is a warm and gentle, but also unhappy and perplexed Dan, a man whose desperate optimism is contained in the mantra It’s Gonna Be Good. Sy’s bitter Natalie is very much her mother’s daughter, not only in appearance but in her high-strung nature. And her parents’ marriage is echoed in her budding relationship with nice-guy Henry, played by Carroll with a woolly-haired, open-faced charm. Antonio, meanwhile, is a slyly handsome and compelling presence as Gabe.

The veteran Pitre, taking on the doctor roles originally written for a male actor, is the picture of calm, silver-haired authority – that is, when not comically switching into strutting rock-star mode in Diana’s hallucinatory moments.

Rock, the music of extremes, is composer Kitt’s canny genre choice for most of his score. Played here by a tight five-piece band under Lily Ling’s musical direction, it gives the story a propulsive urgency.

Tracey Flye’s musical staging includes a few splashes of choreography, such as a witty pas de deux-turned-pas de trois for My Psychopharmacologist and I, but she mostly favours eloquent tableaux. Steve Lucas’s minimal set, with spiral staircase and sliding doors, quick-sketches the Goodmans’ “wood and glass” house. His expressive lighting bathes it in roses and blues that suggest Diana’s bipolarity.

Ten years after it opened on Broadway, Next to Normal may now have a dated reference or two, but this revival proves that it hasn’t lost any of its power. By boldly addressing the complexity of mental illness and its effect on families, Yorkey and Kitt resist the tendency of musicals to simplify, reduce or provide easy happy endings. They have made the genre, to quote one of their own songs, better than before.

Next to Normal continues to May 19. (mirvish.com) 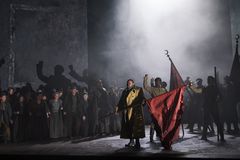 Review
OUT’s story of a gay teen in the 1970s is mostly an exercise in rose-tinged nostalgia
Subscriber content
April 29, 2019 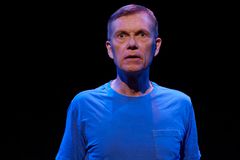 Review
John Caird’s La Bohème is satisfying and organic, both onstage and in the orchestra pit
Subscriber content
April 29, 2019 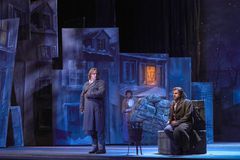