For sure, when I first heard about it – As You Like It set in 1960s British Columbia with Beatles music – I rolled my eyes. I thought: hokey, gimmicky, an obvious ploy to get boomer bums in seats.

And the first switch from blank verse to Beatles – We Can Work It Out in a wrestling ring – was a bit of an unsettling jolt. I thought: a) this is weird; and b) how long are we actually going to be here tonight if they keep breaking into song?

The answer to b) is easy – the running time (including a 20-minute intermission) is about 2½ hours; director Daryl Cloran has cut a fair bit of Shakespeare’s text. But you won’t miss it; and me, I could have sat for another hour of that show.

Cloran and sound designer/musical director Ben Elliott have woven 25 Beatles songs into this production of As You Like It, which originally contained five complete songs (not by the Beatles, as the program jokingly notes in a “Did You Know?” sidebar).

A band – including guitars, drums and keyboard – plays live on a riser behind and sometimes elsewhere on (or above) the stage. They are a fab band of merry men.

In Cloran’s version, Orlando (Nadeem Phillip), cut out of his father’s will by his evil big brother, takes to wrestling to prove his worth. (Apparently, All-Star Wrestling was a big deal in Vancouver in the Sixties.) At the match, he meets and falls instantly for Rosalind (Lindsey Angell).

But Rosalind is banished from Vancouver, and she and her first cousin/best friend Celia (Harveen Sandhu) escape to the Okanagan forest (every single mention of “Okanagan” got a laugh on opening night). Rosalind disguises herself as a man – Ganymede, and Celia as Aliena. They bring family employee Touchstone (Kayvon Khoshkam) with them to carry their impressive collection of luggage and perform other duties.

Orlando also takes off to the forest, after learning that his brother, Oliver (Craig Erickson), plans to have him killed and brings with him their father’s aging, loyal servant, Adam (Andrew Wheeler).

In this production, Shakespeare’s pastoral Arden becomes an Okanagan campground filled with hippies who have escaped the capitalist oppressions of the city to get back to the land.

The scene change is one of the (too many to list) highlights of this production – a complicated, on-stage dismantling of the wrestling ring and transformation into a natural setting, conducted by the dancing cast, as the band plays Help! (Ha.)

Love will bloom in the Okanagan forest for many of these characters in various hilarious ways – in particular for the couple at the centre of the action, as “Ganymede” gives Orlando love lessons for him to apply to Rosalind when he is finally reunited with her.

The fight choreography in the early match is so much fun – full-on, fake wrestling incarnate. Make sure you get to your seat early, as the wrestling festivities begin in advance of the show’s start; Yellow Submarine fans in particular won’t want to miss this (I did, I am sorry to report).

Pretty much the entire cast is excellent, but Angell in particular is a standout, with a beautiful voice and little comic touches. Sandhu is also terrific.

Luisa Jojic delivers one of the show’s comedic high points, with her strong-voiced rendition of Something – sung about the way “he” moves – when, of course, the “he” she’s referring to is in fact a she (Rosalind, disguised as Ganymede).

Khoshkam steals the show again and again with over-the-top hilarity that never gets tired or grating.

And Ben Elliott takes on triple-duty: In addition to being musical director, he plays in the band (mostly keyboards) and also uses his physical-comedy skills to bring Silvius to hilarious life, in farmer’s overalls.

In the second act, a gorgeous little vignette involving the entire cast set to Here Comes the Sun surprised me with its subtle beauty and emotion.

And at one point, there was an audience sing-along to Ob-la-di, Ob-la-da – the only Beatles song I actively hate, and yet there I was, belting it out with everyone else.

It’s the feel-good Shakespeare musical of the summer. I can’t wait to see it again.

Theatre Review
Review: Robert Lepage’s Coriolanus is the show of the decade at the Stratford Festival
Subscriber content
June 25, 2018 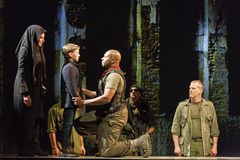 Theatre Review
Review: The Orchard tries to fit a Chekhov-shaped play into a Canadian hole
June 21, 2018 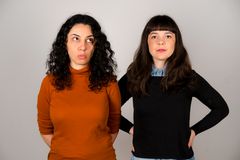