Mimic is not one of those shows that divides human history into pre- and post-iPhone.

Co-created by Peter Balkwill, one of the Old Trout Puppet Workshop – a trio of guys who explore decidedly masculine themes – and Kimberley Cooper, the artistic director of Decidedly Jazz Danceworks (DJD) – a Calgary dance company created and run by women – Mimic, their new show, is a beguiling fusion of what Balkwill calls the two oldest forms of storytelling: puppetry and dance.

It’s also a fusion of tones and sensibilities of two of the city’s most successful and enduring arts creators and companies – the Calgary performing-arts version of an Avengers flick, basically, where all the stars gather under a single screen to save the multiverse, or in the case of Mimic, to explore the idea that no matter how digital we go in the 21st century, there’s still a lot of ancient, old-school human ritual underneath all our screens and emojis and data harvesting.

Or – as Balkwill and Cooper put it in their program notes – “at some point in the history of the human community, we didn’t use words to communicate. Instead, we danced and stomped our grubby feet upon the sodden earth of our dank caves, wildly gesticulating with oddly shaped rocks that resembled the great fearful beasts that we heroically brought down.”

That spirit of animated literary lunacy launches Mimic, which opens in a prehistoric scene, as DJD company dancer Natasha Korney slithers and slides her way to life – it almost seems as if her spinal column has been choreographed to do things most people’s backs could never dream of – while she’s surrounded by slumbering, pre-upright humanity.

All of it unfolds against a juicy, seductive soundscape created by a live band positioned above the playing area, dominated early by Michael Davidson’s vibraphone solo, which is soothing and cool – introverted harmony.

The first act of Mimic feels like a story dance about the human transformation from the caveman days – which the Old Trouts previously explored in Ignorance – through the various stages of human progress, from killing dinner to making love to making a cave a home.

There are masks and bamboo poles, and a soundscape that gradually grows less introverted and evolves into something more vibrant, but it all unfolds in so many stops and starts that it starts to feel as if the dancing part of the equation gets a little lost in the weeds – or bamboo poles – of trying to incorporate puppetry and narrative into the process.

All of that gets overturned in the second act, which flashes forward oh, say, 75,000 years. The act opens with Catherine Hayward applying rouge to her cheeks. It’s now the age – say, the Romantic era – of growing human self-consciousness, or perhaps another way to put it is the birth of the status update.

Here, Mimic takes on a whole new tone and tempo, as Cooper choreographs the dancers at court, at a dinner party, telling funny stories, being social, being sexual – the whole nine yards of human evolution.

As Mimic hurtles toward its climax, the bodies of the dancers take over the storytelling and propel it. Sabrina Comanescu dominates the stage, jockeying for space with Korney in a way that’s exhilarating.

The genesis of Mimic – like a great deal of Canadian performing art – came up at the Banff Centre, where the DJD dancers and Cooper bunked in for a puppet intensive with Balkwill, among the mountains and wild creatures and gift shops that sell maple-leaf-shaped keychains.

You can almost feel that Western Canadian sense of possibility – that long blue sky, those high hopes – seeping through the storytelling veins of Mimic, in ways that are alternately goofy, sexy, smart and snappy.

The more Mimic digs into the civilization of humanity, the more it reveals that underneath the rouged cheeks and witty repartee of high society, humans are still as consumed by ancient rituals as we ever were.

The final scene, where everyone has retreated to their primitive state, huddled under a sheet, until they’re dragged off by the baby of the bunch, pulls together the primitive with the Romantic era.

Mimic moves like the prairies look, stomps its sodden feet like people hoping for the best – and possibly sends its audience back out into the 21-century streets a little less likely to retreat into its screens.

Mimic runs through May 5 at the DJD Dance Centre in Calgary. 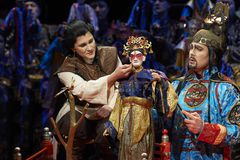 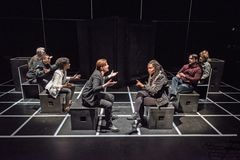