The Assembly: Episode One, a new documentary play from Annabel Soutar’s Porte Parole theatre company, is uncannily acted, stylishly staged – and yet another artistic attempt to grapple intelligently with the rise of Trump-style populism that is an utter failure.

The Assembly was made, no doubt, with the best intentions. In December, 2017, playwrights/performers Alex Ivanovici and Brett Watson brought “four Canadians of different backgrounds and ideological leanings” (as they’re described on the Porte Parole website) into a recording studio in Montreal with wine and pâté to discuss the rise of Donald Trump. The script is an edited and condensed transcript of this encounter.

It sounds like a feel-good experiment in depolarization, in sitting down and looking each other in the eye rather than screaming at or mocking one another through screens. The title nods at the idealized assemblies of ancient Greece where democracy and theatre were born.

In actuality, however, this documentary theatre project has resulted in a comedy about how naively Ivanovici and Watson curated their panel and how incompetently they controlled it – but the false balance isn’t that funny when it ultimately leads to them handing over their platform to a virulent Islamophobe.

Valerie (played by Tanja Jacobs), the panelist who inevitably dominates the proceeding, is an older white woman who helped found a group that describes itself online as “concerned about the triumphalist brand of Islam that seeks to erode our cherished Western principles of free speech and equality with the goal of eventual Islamic supremacy in the West.”

She is a fan of a British bigmouth who contributes to a well-known Canadian far-right website and has a penchant herself for brash, aren’t-I-daring statements. “I would say truth is the new hate speech," she says, smugly (though she’s not without charm in other moments).

At the other end of the table, there’s Shayne (played by Jimmy Blais), who self-describes as queer, Jewish and anarchist. He gives a rather eloquent description of anarchy as an extreme form of democracy, but his main talking point is that nazis should be killed, because nazis ultimately want to kill him. “If you value your life, stop being a nazi,” he says.

As for the other two assembly participants, they are largely sidelined. James (a sweet Sean Colby) is a smiling campus conservative, a rebel only in the liberal Jewish family he grew up in. Hope (the charming Ngozi Paul), the only person of colour at the table, is a self-described moderate liberal accountant who keeps her cool remarkably.

There’s a popular genre of American drama where characters with varying viewpoints gather around a table, usually for dinner, drink a lot, and then explode about the issues of the day – plays like Theresa Rebeck and Alexandra Gersten-Vassilaros’s Omnium Gatherum (2003) or Ayad Akhtar’s Disgraced (2012).

I’m not a huge fan of those contrived dramas in the first place, and I’m really not sure how I feel about the ethics of simulating one in the real world as fodder for a verbatim play.

Were Porte Parole’s playwrights Alex and Brett (who play themselves here) really unaware that they had put together such a combustible group? What they’ve come up with is closer to a cross between cable news and reality television (those great allies of Trumpism) than documentary.

If you’ve ever watched discourse devolve on Twitter, you know how things are going to play out here. The “alt-right” person acts as joking provoker, the anti-fascist reacts robustly and earnestly, then the alt-right plays the victim; the old-consensus others are mainly mute and moot.

In short, The Assembly – while exhilarating in the moment – is the opposite of illuminating.

In its second section, audience members are invited to occupy the six seats at the table (behind microphones and under screens, designed by Simon Guilbault), and you get to hear how regular chit-chat about politics between strangers actually sounds: a bit boring.

The night I was there (the final preview), however, the actor Jacobs, who is passionate and pathos-filled and downright extraordinary as Valerie, also sat down – and, as herself, told the audience about how nervous she was about how Valerie would react to her performance. The Assembly: Episode One next appears in Montreal, at Théâtre Espace Go, in repertory with a French-language second episode, from Nov. 10 to Dec. 10.

One black audience participant hit it on the head when she told Jacobs that Valerie’s voice was well-represented – and asked her to consider instead, “Who’s not at the table?”

Indeed, that’s the pertinent question. The absence of a Muslim voice in the play is particularly egregious given that Ivanovici, Watson and Soutar allow Valerie extra time, briefly having Jacobs recreate a speech of hers they found online about “civilizational jihad.” That is, essentially, a conspiracy theory that Muslim refugees and immigrants to Western countries like Canada are here on a stealth mission to eventually impose sharia law.

It’s left uncountered, and the generous explanation for this speech’s inclusion is that it assumes The Assembly’s audience to be aware enough to hear it and know what it is.

But similar racist rhetoric has already radicalized people in Canada – convinced them to kill, in fact. How quickly we’ve forgotten that six Muslims were murdered at their house of worship in Quebec City, a massacre not even noted here, despite the Montreal setting.

For The Assembly to be more than a platform for another charismatically un-PC alt-right figure to rile us up, some deconstruction was required. Instead, the show uses Valerie’s full name, advertises her far-right organization and then it gives her an additional opportunity to spout off. Do its creators realize they’ve been used – or is The Assembly’s failure its point? 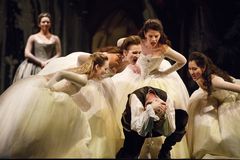 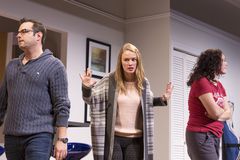