There’s no more influential or in-demand stage director in the world right now than Ivo van Hove – whose four-and-a-half hour Shakespearean mashup, Kings of War, is currently conquering Montreal as the opener of the Festival Transamériques.

Eight years ago, Montreal’s festival of international performing arts first brought in the Belgian director with the North American premiere of his Roman Tragedies – another Shakespeare production starring the Dutch ensemble from the Toneelgroep Amsterdam theatre he runs – and shortly thereafter, his career exploded.

Dubbed a “maximalist minimalist” by The New York Times, van Hove now has had a string of shows on the West End and Broadway – and has both a Tony Award and an Olivier Award on his résumé for his sublime production of Arthur Miller’s A View From the Bridge (which toured to Chicago and Los Angeles, too).

English Canada, alas, has missed out on all his major productions.

Kings of War convincingly condenses five of Shakespeare history plays – Henry V, all three parts of Henry VI and Richard III – into one epic evening of theatre about power and the different ways it is wielded.

Yes, the actors do speak in Dutch – but there English and French surtitles crowning the stage so you can follow along (the English ones often mangling the original Shakespeare, in delightful ways).

Although his title emphasizes war, van Hove’s vision of the Wars of the Roses is an interior one, taking place in an unusual pair of staging areas crafted by his brilliant partner in design, Jan Versweyveld.

The first is a big, open fluid room that functions as office, war room, Plantagenet family den and – when Hans Kesting’s Richard III runs out of sycophants – bunker. Sometimes, it is many of these places at once: It requires your imagination to define it, not unlike a bare thrust stage. (Versweyveld’s undelineated lighting never underestimates our ability to imagine.)

Then, around and behind this room, out of the direct view of the audience, there are three connected white corridors – the corridors of powers, I suppose – where the evening’s procession of kings and queens and princes and dukes retreat to whisper treasonous plans, or plot escape routes.

The audience does get to see what goes on there because a Steadicam operator roams these hallways artfully filming the action there – and a live feed appears on a screen that hovers above the stage ominously.

This means lots of West Wing-style walk-and-talks – although the video does occasionally gives expressionistic glimpses of army camps, morgues, hospitals and, briefly, turns into a kind of first-person shooter when the Duke of Gloucester grabs the camera and starts knocking off Henrys and Edwards backstage en route to the throne.

Occasionally, van Hove tricks the audience by surreptitiously switching to prerecorded video, making us believe, for a moment, that the cast might be even bigger than the 19 actors and musicians that are on hand; and that there might even be a flock of sheep backstage at Théâtre Denise-Pelletier.

The use of live video in this way isn’t van Hove’s invention, but it’s executed in an inventive and highly polished way here. There being too many screens in my life as it is, however, I was most interested, theatrically, in what was going on right in front of me. The ways in which the Toneelgroep Amsterdam actors distill their character down into striking postures and then led language flow out of them in torrents, the ways they use physical action to comment on their characters as much as embody them.

Kesting, a live wire of a performer whom I’ve previously watched pursue power as Roy Cohn in Angels in America in New York, and as the publisher Gail Wynand in Ayn Rand’s The Fountainhead in Amsterdam, keeps looking at himself in the mirror and later examines his shadow with the same forensic fascination. Finally, he turns into a shadow himself as the lighting swallows him up – and he cries of “A horse, a horse, my kingdom for a horse,” before wildly galloping around the stage himself.

Another aspect I loved: The four trombone players, onstage almost throughout, a theatrical distortion of a royal fanfare or of the trumpeters that usher audience members into a performance at the Stratford Festival.

It’s a shame that Shakespeare-obsessed English Canada – its audiences and its artists – are missing out on van Hove’s take on the Bard again. Then again, you don’t need to trade your kingdom for a horse to get to Montreal – there are planes, trains and automobiles.

Kings of War continues through May 27; the Festival Transamériques (fta.ca) continues to June 7. 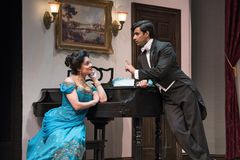 Theatre Review
Review: Grand Hotel, The Musical suffers from a disappointing cast and cringeworthy writing
May 25, 2018 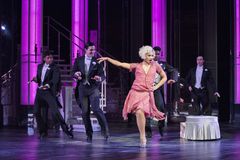 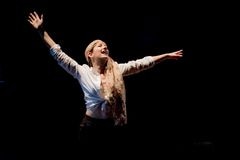