Bard on the Beach’s 2019 production of The Taming of the Shrew is set in in the Wild West in 1870. Padua becomes Padua City; Petruchio’s Italian country house becomes a grubby campsite, Katherine’s father becomes her mother and director Lois Anderson gives some of Petruchio’s lines to Katherine, the shrew who in this production is not tamed by her love interest, but contented.

The show, which opened Bard’s 30th-anniversary season on Father’s Day, is fun, for sure – despite some flaws.

This is a difficult show to do for obvious reasons. Shakespeare’s play celebrates a man’s manipulation of his new wife into submission through tactics such as starvation and sleep deprivation, and her redemptive speech at the end extols the importance of a wife’s duty and “true obedience.” Yes, contemporary Katherines are given more agency and viewed as victims of the oppressive patriarchal system, which makes this provocatively sexist play more palatable to contemporary audiences. Still, why do Shrew in 2019?

Anderson tells us exactly why with a brilliant device: Whenever Katherine (Jennifer Lines) encounters a group of townspeople, they taunt her with chants of “Shrew! Shrew!” She is the outcast, the other. And her othering is announced cruelly and publicly with all joining in the mob – even her own sister. That seems like a very good reason to do Shrew in 2019.

As the show opens, beautiful Bianca (Kate Besworth) is a polyflirt who is eager to marry. But she is forbidden from doing so by her mother Baptista (Susinn McFarlen) – her father in the original – until her older sister Katherine is married off. However, finding a husband for Katherine won’t be easy; she is not an ideal bride, but “intolerable;” an “irksome, brawling scold.”

Fortunately, Katherine has something else going for her: money. Her mother is promising a good dowry and Petruchio (Andrew McNee) is in need of some financial stability. So, hearing of the dilemma facing Bianca and her suitors, he decides he will marry her older sister, sight unseen. And he will execute a plan to tame her.

Instead, the two fall in love – and both are changed. In this telling, Katherine becomes an equal rather than a subservient partner.

McNee is marvellous – a more affable and lovable than mean and macho Petruchio. We are rooting for him to woo Katherine because he clearly deserves her.

Or does he? I had some trouble with early Katherine, in particular the over-the-top expression of her anger. She runs around hollering at the top of her lungs and it seemed a bit much; nor was it really explained. If it was meant to be funny (many in the audience laughed each time), I didn’t find it so. Okay, she’s furious; we get it. Lines, a tremendous actor, can do nuance, but she doesn’t really have the opportunity in the opening scenes; she’s too busy running around yelling.

Screaming aside (and she is a very good screamer), Lines is a strong, smart – and sensual – Katherine, who you’re sure has a twinkle in her eye as she and Petruchio become partners in crime, even if you can’t actually see it from your seat.

Another delight in this production is Anton Lipovetsky as Hortensio, one of the men wooing Bianca. Wide-eyed and earnest, he demonstrates saddlebags of talent – as awkward with a musical instrument as he is with women and it’s a hoot.

Joel Wirkkunen’s hammy Grumio in a furry vest is fun and hearing some Shakespeare spoken with a cowboy drawl is a trip.

This is not the first rodeo for this spaghetti-western Shrew; Anderson builds on Miles Potter’s 2007 western-themed production. (Also, Anderson played Katherine in Bard’s terrific 2012 production.)

Malcolm Dow’s sound design, using compositions by the late Marc Desormeaux – the sound composer for that 2007 production – is wonderful: romantic, funny and evocative.

One of the show’s best moments sees the men of the camp sing a song, which lulls Katherine, finally, to sleep under the stars as Petruchio watches over her.

(Ahead of the show, a functional problem with the vocal equalizer was announced as a warning, but this was rarely apparent, so kudos to board operator Liam Hunt.)

The show is dynamic and entertaining, clicking along with some very funny and inventive moments. In the end, Katherine isn’t tamed, but lightened – and enlightened. (And quieted – but not silenced.) Petruchio grows too. Love can be the best teacher.

It doesn’t always feel authentic, but this Shrew is a good time, y’all, and still worth a ride down yonder to Vanier Park on Vancouver’s west side.

August: Osage County: a tragicomedy about the deteriorating state of the American family, and more
May 27, 2019 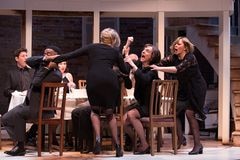 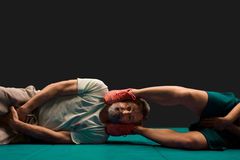 Review
The ‘invisible women’ of World War II are celebrated in a stylish new musical at Calgary’s Vertigo Theatre Subscriber content
May 24, 2019