Howard Barker is one of those playwrights who wears it as a badge of pride that he’s never been fully embraced by his country’s theatrical institutions or theatregoing public.

There are a number of these British stage scribes whose fans believe it a sign of their superiority that they are more widely produced “on the continent” – and some have, indeed, been unfairly neglected or misunderstood at home.

But Canadian playwrights can only look at the Barkers and the Bonds, the Kanes and the Crimps with envy – our best-known are lesser-known than these supposed outcasts, and our outcasts are invisible. (It’s not just us, of course: Name two contemporary Brazilian or Syrian playwrights.)

Victory: Choices in Reaction, Barker’s 1983 play set during the English Restoration, is now getting a starry production at the Shaw Festival that makes it particularly hard to buy into the rebel sell behind his brand. This is the work of a dated bad boy whose disregard for structure and stakes seems to stem from arrogance more than brilliance.

A meandering affair receiving a low-key production from Shaw artistic director Tim Carroll, Victory circles around a widow known as Bradshaw (Martha Burns), whose late husband was one of the men who signed the royal death warrant for Charles I a decade before the play begins.

Now that Charles II has been installed on the throne, pardon has been extended to those who opposed the monarchy – save the signatories of that warrant, who are given show trials and put to death. Those already dead, like Mr. Bradshaw, have their bodies dug up and put on display.

It eventually becomes clear that Bradshaw has decided to collect her husband’s parts. Unlike Antigone, the Greek tragic heroine who insists upon proper burial for a loved one, however, she does not live by a clear code and lacks any clear motivation for her mission.

Like other characters in Victory, she seems to act or react in haphazard ways, scene to scene.

Bradshaw is accompanied by the self-pitying Scrope (a wonderfully despicable Patrick Galligan), a Puritan idealist and a coward, and is pursued by a Royalist fighter named Ball (Tom Rooney), who is depressed in peacetime and now is fixated on raping Bradshaw.

McCamus carries himself majestically on stage, and excels at louche ennui – but you may be a bit tired of this if you saw his similar King John at Stratford or George III in The Madness of … at Shaw.

As depicted by Barker, Restoration England has not found a new balance of power between Parliament and King, but instead is now controlled by a group of bankers and property owners led by Hambro (Gray Powell).

You can feel the play’s Thatcher-era origins here – and Carroll’s staging is at its smartest during the scene in which Barker’s conspiratorial anti-capitalist thinking is made clear. He leads the audience downstairs to a candlelit rehearsal room before intermission to peek in on a literal shadowy cabal hiding beneath the play.

The sharpness and tension of this scene is oddly absent from the rest of the show, which trades in ambivalent emotion and surface provocation.

Many of Canada’s most renowned classical actors use the C-word with abandon – and one makes out with a putrid skull. There’s gruesome torture, sexual violence and a general depiction of humanity as cynical and opportunist that will scandalize exactly no one who watches Game of Thrones.

None of this has any bite and some of it feels eye-rollingly adolescent. I think it’s a mistake to take Barker at his word that his plays are free of ideology and that one should avoid strong directorial or acting takes.

This may sound like a contradiction, but Victory is a play I personally would have bought a ticket for this summer and would not have left feeling robbed.

A couple of decades ago, Barker was first passed to me like a strong joint in undergrad with a whisper: This is the real stuff. But I’ve gone from eagerly underlining passages in his Arguments for a Theatre (“The authoritarian art form is the musical”) to finding myself blaming underwhelming productions for my dissatisfaction with him in performance, and I’m glad now to have the opportunity to come to my own conclusion that his plays are probably justly sidelined.

It’s certainly hard not to be put off by Barker’s immense ego and unacknowledged privilege in a program note he’s penned called “Four Decades Since Writing Victory.” He writes that Victory – “an acknowledged masterpiece now” – was first staged in 1983, but “had languished on the shelves at the Royal Court Theatre, the National Theatre and the Royal Shakespeare Company for nearly three years.”

Three years, poor man. A white, male, English-language playwright with a theatrical manifesto in its fourth edition writing that in 2019 gives you an idea of how out of touch he is now.

Editor’s note: (August 13) An earlier version of this review incorrectly stated that Tim Carroll directed Tom McCamus in The Madness of George III at the Shaw Festival. The director of that production, in fact, was Kevin Bennett. 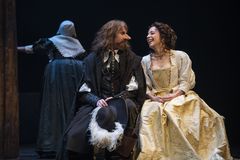 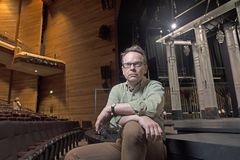