The Front Page is every newspaper journalist’s favourite play. Allegedly.

I add in that journalese adverbial hedge because I’m not sure how many have actually seen the original file of Ben Hecht and Charles MacArthur’s 1928 comedy set in the press room of a Chicago courthouse.

The rewrite desk has worked over Hecht and MacArthur’s copy so many times that it’s hard to separate fondness for it from fondness for later editions – whether the 1931 movie or Billy Wilder’s 1974 remake, or the 1940 screwball spinoff, His Girl Friday, itself adapted for the theatre by John Guare in 2003 (and recently seen at the Shaw Festival).

Now we can add Canadian playwright Michael Healey’s new version of The Front Page to the list, hot off the presses at the Stratford Festival in a production directed with farce-like fluidity by Graham Abbey.

Healey (The Drawer Boy, Proud) has kept the story pretty much the same.

The Chicago Herald Examiner’s star reporter Hildy Johnson (Ben Carlson) has quit the business and bought tickets on an overnight train to New York, where he plans to get married and go into advertising.

But when he stops by the courthouse to say goodbye to his old colleagues, a story breaks that’s too big for the journalism junkie to resist.

A white man who killed a black policeman has broken out of jail hours before he was scheduled to be hanged – an escape that may affect the coming municipal election as the corrupt mayor (Juan Chioran) and sheriff (Mike Shara) were counting on the execution to shore up the black vote behind their ticket.

The Front Page usually has at its centre Hildy’s love-hate relationship with his coarse, controlling editor Walter Burns.

Healey has, amusingly, kept that character in the play’s universe, but killed him off; his widow, Penelope Burns (Maev Beaty, mugging effectively), now owns the paper and does his job and gets all of his excellent lines.

A favourite, as she excoriates the way Hildy has structured his story on the jailbreak: “Who the hell reads the second paragraph?”

Despite its iconic lead characters, The Front Page is a really an ensemble piece, a workplace comedy, a genre that has thrived on television but of which there are few theatrical examples.

It’s enduring strength is its lively portrait of a culture of underpaid, obsessive, ethically agnostic newspaper scribes writing for relatively niche publications compared with the large circulation dailies of the later 20th century.

The play is not and never has been All the President’s Men. As Abbey writes in an astute director’s note, it is both “a veneration and a reproof of the gritty, seductive world of Chicago journalism.”

Healey’s write-through keeps the general rabid atmosphere of the press room and doesn’t dilute the sexism and racism found there, but does remove epithets as a source of humour. He keeps, for instance, one particularly reviled epithet for effect, but dispenses with its more casual usage.

The playwright, whose own comedies combine broad humour with sincere examinations of society’s institutions, can’t resist adding in a couple more dignified types, mind you.

Notably, there’s Wilson (the excellent E.B. Smith), a diligent black journalist working for The Chicago Defender, the great real-life African-American newspaper that once employed Langston Hughes. Also seemingly hard-working and ethical is a female journalist named McLaren (the fine Michelle Giroux), who seems to be only grudgingly accepted as one of the boys.

McLaren’s first name, by the way? Althea. Hmm. A number of the character names will sound vaguely familiar to those who follow Canadian journalism.

But Healey’s best alterations are the more serious-minded ones, such as his deepening of the racial politics that are the backdrop in the play – notably, resurrecting a cut-from-an-early-draft black alderman named Willoughby (David Collins), who is part of the machine of Chicago politics but has a moral mission.

Other Chicago bigwigs are depicted as total dumbos. Shara, in particular, chews up the scenery as Sheriff “Pinky." Over all, Healey and director Abbey are not afraid of going big, of funny voices and weird walks.

I do kind of wish they’d resisted the urge to have a character say “fake news”, however – or the joke about colluding with the Russians, which only confuses the play’s references to America’s first Red Scare.

There may be something about The Front Page’s frenzied world of early and late editions and phones ringing off the hook (literally, off hooks) that doesn’t seem that far away from our own non-stop, social-media, hyper-partisan world of news cycles. But this version doesn’t connect the dots; it’s entertaining, but gallops in many directions at once: Homage, touch-up, Trump-era take. 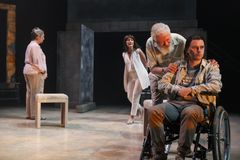 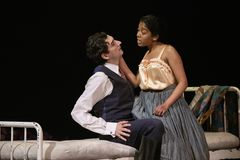