Tarragon Theatre, like so many Canadian theatres dedicated to new plays, gives birth astride a grave.

Most of its newborns, to mix metaphors from classic plays, strut and fret their hour (and perhaps 30 minutes) upon the stage and then are heard no more.

For its 50th anniversary season, Tarragon initially planned to continue on its merry way premiering a slate of world premieres. But then God laughed – and the ensuing pandemic has made space and time for the company to look back, and think about where it has been running to all these years.

Tarragon Acoustic is outgoing artistic director Richard Rose’s replacement for the original 2020-2021 season: It’s a series of 18 shows, mostly drawn from the theatre company’s history, that will be released as streaming audio.

These “plays for the ear” are recorded rather than live, but they will nevertheless only “run” for a week at a time on the theatre’s website. Unlike so much pandemic programming, you’ll have to actually have to buy a ticket. (The cost per show is $12.50 – or you get subscribe to the entire season for $152.)

David French’s Leaving Home kicked off this acoustic season on tarragontheatre.com Thursday night – and, remarkably, it is the first time Tarragon has produced this play in any format since its original hit production, directed by co-founder Bill Glassco, saved the fledgling company from going under in 1972.

French’s plays remain the company’s most notable contribution to Canadian culture – particularly those plays in which he chronicled the lives of the Mercers, a fictional family that, like his own, moved from Newfoundland to Toronto in the 1940s, the last decade that particular migration was considered immigration.

Leaving Home, the first of that Mercer cycle, takes place, according to the script, in what is now a bit of an oxymoron: “a working-class house in Toronto.”

This is the home of Jacob Mercer (Steve O’Connell) and Mary Mercer (Petrina Bromley) – and their two sons, Ben (Kayvon Khoshkam) and Bill (Brendan McMurtry-Howlett), who are both about to leave it.

Bill, just 17, is imminently to be married to his girlfriend, Kathy Jackson (Vivien Endicott-Douglas), who is pregnant. And Ben, who is 18, plans to move in with the newlyweds to get away from his daily shouting matches with Jacob.

Adding to the tension is the fact that Kathy is Catholic, much to Protestant and prejudiced Jacob’s dismay – and that, back in Newfoundland, Jacob once dated her mother, Minnie (Alison Woolridge).

Leaving Home takes place in one room over one evening and a fair bit of whisky. Weirdly, its emotional centre is not the wedding, the pregnancy or the complicated romantic history of the parents but the rather banal desire of 18-year-old Ben to move out on his own and Jacob’s fraught response to it.

But that does help distinguish Leaving Home from many other naturalistic kitchen-sink dramas about dysfunctional American families. This was the first major Canadian play to seriously explore the generation gap in New Canadian families, between parents born elsewhere and children born or raised in Canada. Those themes have since been tapped time and time again on Canadian stages – Ins Choi’s Kim Convenience being one of the more recent and most successful examples.

Bromley – best-known for playing Bonnie in Come From Away on Broadway – is the stand-out, painting a picture of Mary as patient, but not a pushover.

Perhaps because I could not see the actors, however, I found it hard to erase from my mind Kenneth Welsh’s powerful presence as Jacob in his Dora-nominated performance as that petty, prejudiced and insecure paterfamilias in revivals of Leaving Home and its sequel Of the Fields, Lately at Soulpepper in 2007 and 2009.

By contrast, O’Connell’s performance here as Jacob is surprising subdued; he’s weaker and more pathetic, choices that sap some energy from the play’s comic side – at least until Woolridge shows up and goes wild as mother-in-law from hell, Minnie.

I’m not sure if it was my knowledge that Leaving Home was recorded with the actors in different locations that made me sense a disconnect in the performances. But I definitely did miss the physicality of French’s play in production – the drunken dancing, a silent comic character named Harold, and the outbursts of violence don’t really register in this recording sound designed and edited by Chris Tolley. (A significant slap in the script was either cut or inaudible).

I do appreciate the Tarragon’s impulse to use this in-between time to look or, I suppose, listen back, however. I’m concerned that Canada’s overemphasis on new plays is going to reach a crisis point after the pandemic – as cancelled plays, ones that would have been mounted in seasons never announced, and a flurry of new commissions all compete for limited stage time whenever theatres reopen. 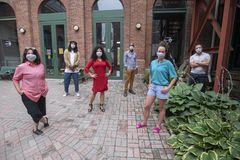 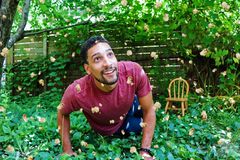 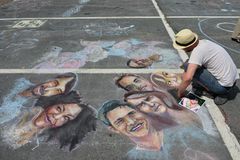