The National Ballet’s The Merry Widow will be most enjoyed by those who prefer sets to substantial choreography. There’s little arguing that Ronald Hynd’s 1975 three-act ballet isn’t visually spectacular. Set in 1905 Paris, the production follows the struggles of the fictional Pontevedro – a small, Balkan principality curiously able to maintain a large diplomatic presence in the French capital despite its flagging economy. Desmond Heeley’s twisting staircases, opulent ballgowns and twinkling chandeliers are certainly ravishing to behold. They conjure the haunted mood of fin-de-siècle Europe, brimming with nationalist pride and material luxury, apparently innocent of what these trends will incite as the 20th century unfolds.

Based on Hungarian composer Franz Lehar’s 1905 operetta, and using his original orchestration (arranged by John Lanchbery), the ballet’s chief musical motif is, unsurprisingly, the waltz. Perhaps no dance evokes the elegance and majesty of the last years of the Austro-Hungarian Empire quite like this three-quarter signature step, whose Viennese incarnation has a dreamlike essence, able to distort our sense of time. Though the footwork isn’t slow, this waltz has a slow-motion spirit, an impression created by the discord between the upper and lower body. Bending backwards and clasping their arms high, the dancers appear to float over their own legs, catching the breeze as their feet propel them into wide, circular configurations. For a sequence in Act 1, which is set in the Pontevedrian embassy, the effect is hypnotic.

Otherwise, it’s easy to see why this expensive production hasn’t been presented by The National for over a decade. It’s an odd, fluffy ballet with a convoluted plot, caricatured personalities and little emotional depth. In style, it feels like a pseudo-19th-century story ballet, though Hynd might have embellished the worst of that era’s offerings and minimized the best. The Widow is full of campy pantomime about demure maidens, lusty suitors and drunken counts. It’s hard to imagine much of this being funny in the 70s. Today, certain moments seem in particular bad taste. There’s a locked-elbow nationalist salute in Act 1, meant to evoke Pontevedrian patriotism, and a scene in which the French attaché, Camille de Rosillon (Naoya Ebe) places his hands on Valencienne’s (Jillian Vanstone) breasts over and over again, despite the fact that she effectively tells him to stop every time.

The great story ballets, like Giselle and Swan Lake, come with great sequences of technically demanding choreography, but these are absent here, too. There’s a practical explanation for a part of this: the role of Hanna Glawari (Xiao Nan Yu) was designed for an older ballerina. Hynd was commissioned to make the ballet for Margot Fonteyn, nearly 60 in 1975, while she was a visiting artist with the Australian company. That can’t explain the thinness and repetitiveness of what he’s devised for the corps de ballet, not to mention his repeated use of figure-skating type lifts in his pas de deux. With the women (Valencienne in particular) constantly manipulated over their partners’ heads in complicated shapes and dips, there’s little space to let the choreography express much in the way of feeling.

Allegedly, principal dancer Xiao Nan Yu chose this ballet as her farewell performance, marking her retirement at the end of the season. In many ways, it’s an odd choice. Yu is a dancer of grace, poise and gravitas, whereas The Widow is light and (ostensibly) comedic. Some of the choreography she’s given is downright ungainly; for example, there’s an aggressive developée with a flexed foot that recurs in Act 2. She’s paired with Guillaume Côté as Count Danilo, a character so drunk at the beginning of Act 1 that he can barely walk straight. It’s nearly impossible to keep track of what’s happening between the two of them, who’s angry at whom and who’s presently refusing forgiveness. We’re clearly supposed to glean significant meaning from the orange handkerchief they keep tossing back and forth, but the point remains obscure. The plot has echoes of the far superior ballet Eugene Onegin, in which a young girl is also rejected in love for her low stature and naivety only to mature into a woman of sophistication and wealth. The Widow makes no claims at such seriousness; in fact, you might say it’s less a ballet and more a silent-period-piece-cum-dancing.

The Merry Widow continues at the Four Seasons Centre until June 23 (national.ballet.ca)

Dance under the highway: How choreographer Noémie Lafrance will enthrall Torontonians at the Bentway
Subscriber content
June 5, 2019 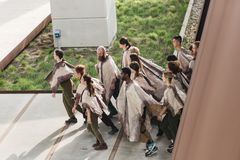 William Forsythe’s Physical Thinking at the National Ballet is a rich and vigorous interrogation of the classical medium
June 4, 2019 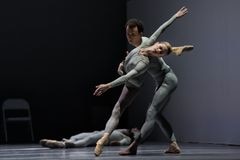 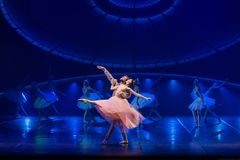