I used to declare that I wasn’t a Cats fancier. That was before I had a preteen daughter whose fascination with felines knows no bounds. Suddenly, I couldn’t wait for her to see Andrew Lloyd Webber’s proto-mega-musical – and preferably live, onstage, before the release of the creepy-looking CGI movie version with Taylor Swift et al.

Mirvish Productions has obliged by bringing the show’s current North American tour to Toronto for a holiday-season engagement. This is the latest version of the legendary production, which underwent some renovations for its 2016 Broadway revival. So if you’re already a fan, it’s a chance to check out the improvements. If you’re a newbie like my daughter, it’s the perfect introduction.

She came to the show knowing zilch about it – apart from loving Macavity: The Mystery Cat, one of the dozen or so T.S. Eliot cat poems that serve as its source material. And I’m sure she’d heard the melody to Memory in an elevator. On the way to the theatre, I gave her a quick sketch of the notoriously skimpy plot: In a moonlit junkyard, the Jellicle Cats are holding their annual Jellicle Ball. At the end of it, their leader, Old Deuteronomy, will choose one of them to ascend to the Heaviside Layer, their cat heaven, to undergo a rebirth.

Then I let the songs and dancing do the rest.

As those anthropomorphic Jellicles prowled the stage, singing Eliot’s quaint verse set to Lloyd Webber’s lively pastiches, she was riveted, soaking in every bit of information about this rare-but-familiar tribe. Meanwhile, I was focused on their paws.

Cats really is a dance show more than anything – and certainly in this reboot, with Hamilton’s Andy Blankenbuehler reworking the original choreography of the late Gillian Lynne. His revisions provide most of the highlights here, among them the flashy Magical Mister Mistoffelees sequence in Act 2, with its hocus-pocus moves and R&B groove. But just as fun is the slinky, Bob Fosse-flavoured choreography for the Macavity number, performed with Gwen Verdon pizzazz by Alexa Racioppi’s Demeter and Emma Hearn’s Bombalurina.

The acting is pretty good, too. As Grizabella, the faded glamour cat, Keri René Fuller is so scruffy and forlorn that she reminded my daughter of one of those pitiful strays in the animal-rescue videos she watches on YouTube. By the time Fuller had sung Memory at the show’s climax, her mighty pipes belying her frail appearance, she’d become my daughter’s favourite character.

But there are plenty of lithe youngsters, too, and they’re continually leaping off the stage and stalking the aisles of the Princess of Wales. All the better to appreciate up-close those iconic costume designs by John Napier, which are so 1980s – sleek painted Spandex with furry legwarmers and various shaggy and spiky coiffures.

Napier’s set is also a classic; a nocturnal junkyard with the junk scaled to a cat’s perspective, its huge hubcaps, shoes and the like used by the Jellicles as costumes and props. Happily, unlike beloved behemoths Les Misérables and The Phantom of the Opera, Cats hasn’t undergone a major scenic makeover. It does, however, have a snazzy new lighting design by the felicitously named Natasha Katz.

I’m still perched on the fence when it comes to Cats, but it did gain one new convert. As we left, my daughter was fervently hoping her drama club would stage it as its next musical production.

Review
Alexander Thomas shines as the heart of Coal Mine production of Between Riverside and Crazy Subscriber content
November 28, 2019 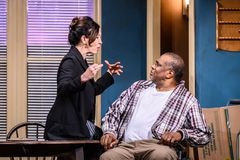 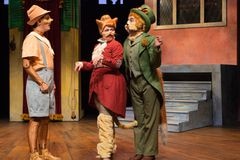 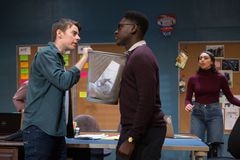