Back in 2002, Marc Hall fought to dance with his boyfriend for just one night. Now, 18 years on, he gets to dance with him seven times a week on stage at Theatre Calgary.

The Louder We Get – a new musical with songs by composer/lyricist team Colleen Dauncey and Akiva Romer-Segal and a script by Kent Staines – dramatizes the true story of the gay Oshawa, Ont., teen who took the Durham Catholic school board to court for the right to bring his boyfriend to prom, and won.

With a voice light as air, Evan Kinnane gives a sweet and spirited star performance as Marc, now our blue-haired poster boy for LGBTQ rights, but depicted here as an innocent teen who just wants to go to prom like everyone else and unwittingly ends up the centre of an international media frenzy.

Similarly, The Louder We Get – originally called Prom Queen – keeps getting more and more attention. It’s grown from a hit run at the 306-seat Segal Centre in Montreal to this big-budget, 23-actor production led by Broadway director Lonny Price at the 750-seat Max Bell Theatre. Can it get even louder?

The Louder We Get’s opening number, Say Yes, sets up Marc not as an exceptional individual destined to be a hero, but actually quite regular. He is not much more nervous about asking his boyfriend Jason (the excellent Nick Dolan) – a recent grad who went straight to the local GM factory – to prom than the other boys and girls at high school are about the impending graduation dance.

This is expressed in the girl-chorus/boy-chorus number Game Face: so far, so Grease-y. But when Marc tries to register Jason as his prom date, things get more serious. His request is denied by Principal Warrick (Naomi Costain) – whose catchphrase “no exceptions” is later flipped by her students into a rousing Green Day-esque punk-pop number.

While many of the facts have been massaged, The Louder We Get is set in its original flip-phone and dial-up era – and it’s refreshing to see Marc’s friends (and his Acadian mother Emily, played by Kira Guloien) immediately get behind him and fight for his right to party. (The distance of Marc’s father – played by Come From Away’s Lee MacDougall – has to do with his personal struggle over his other son’s suicide.)

The musical is more about teen power than it is a coming out story – and the youthful casting (several actors are still in theatre school) conveys this vividly. A stirring act-one finale sees more and more young people fill the stage, singing: “The more they try to silence us / the louder we get.” This tuneful anthem could easily be appropriated by today’s teenage climate-change or gun-control activists.

This isn’t the only memorable melody composed by Dauncey – unlike most musicals these days, you’ll walk out humming a few – while many of Romer-Segal’s lyrics seem like something you’ve already memorized. (I mean that mostly in a positive way, though there are a couple moments where they sound less classic than cliché.)

While The Louder We Get will certainly entertain enthusiastic Calgary audiences this month, this production – commercially enhanced by a group of investors led by producer Mary Young Leckie – will need a directorial and design rethink and some dramaturgical work to be “destined for Broadway,” as the show’s PR says.

The teenagers are much better drawn than those in The Prom, a queer-prom musical that was on Broadway last season. But other aspects feel like a mash-up rather than a cohesive whole.

The multiple personalities of the material are made physical in designer James Noone’s perplexing set. It mainly uses rolling school lockers to conjure environments from the GM factory to Hall’s home, but then there are several levels of rock-musical catwalks, arched church-like windows that obscure them (and bad PowerPoint-style projections), and a giant fireman’s pole that raises that spectre that this might turn into Hustlers: The Musical. (Don’t worry: it doesn’t.)

While the high school elements only flirt with the familiar, the union stuff feels too indebted to Billy Elliot (from dancing students in Catholic uniforms and hard hats to a final plot twist) and a slick human-rights lawyer named Lonnie Wynn (the velvet-voiced Thom Allison) is introduced with a razzle-dazzle number that seems like a parody of Billy Flynn’s in Chicago.

The creative team should find more original approaches to these elements, because the homages obscure what is interesting and unusual about their tale. The Canadian Auto Workers union was solidly behind Hall from the get-go (it had, in fact, negotiated same-sex benefits at a GM subsidiary all the way back in 1990), while a gay lawyer, who had never been to his prom, would have more power depicted less satirically.

The climactic courtroom scene and its confusing song also needs a rethink. But if my note to the creators is to find focus and deepen, the memo to Calgary audiences is that there’s a ton to love about this fun and tear-jerking teen musical right here, right now. 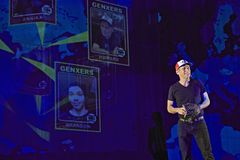 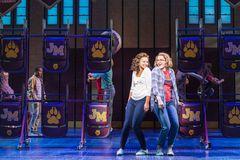