Can a theatre critic write a review of the musical Waitress without making a single pie pun?

It’ll be hard, but three years after the show with music by singer-songwriter Sara Bareilles opened on Broadway, two years into its North American tour and six months after its West End debut, all the good ones have already been used many, many times over.

It’s a “slice of heaven” or, and this one is obviously British, “meaty … packed with delicious filling.” Contrarily, other critics have described it as “half-baked” or “sweet but not filling.”

I’m siding with the pie-positive takes on the musical, which is now winding up its tour in Toronto.

The plot of Waitress closely follows that of the 2007 film by the late Adrienne Shelly it is based on – and the book by Jessie Nelson at times even simply turns passages from Shelly’s screenplay straight into stage dialogue.

Despite that, the show doesn’t feel derivative thanks to fresh, er, elements added in by Bareilles, director Diane Paulus and choreographer Lorin Latarro.

Jenna (Christine Dwyer) is a pie-making phenom working in a roadside diner in the American South who discovers she has a … fertilized egg implanted in her uterus.

This is not happy news for her as the pregnancy is the result of one night of letting her guard down with her abusive husband, Earl (Jeremy Woodard).

With the help of two co-workers, brassy Becky (Melody A. Betts) and nervous Dawn (Ephie Aardema), Jenna plots to save up money to travel to a baking contest that has a cash prize big enough to help her start a new life.

Adding some complexity to a story that might otherwise be too melodramatic, Jenna also falls for her married ob/gyn, Dr. Pomatter (Steven Good), while she’s plotting her escape – and the two begin an affair.

The question of the pursuit of happiness and how it relates to marriage is followed in subplots involving Becky, whose husband has become disabled, and Dawn, a perpetually single American Revolutionary War history buff who stumbles upon a seemingly perfect match in an oddball named Ogie (the very funny Jeremy Morse).

Dawn and Ogie’s courtship provides welcome comic relief – notably when the new couple get it on in their Betsy Ross and Paul Revere costumes like some sort of white-and-nerdy parody of Hamilton. (That hip-hop musical opened on Broadway the same season as Waitress: Is it too much to see Ogie, who makes up terrible patriotic poetry on the spot, as spoofing Lin-Manuel Miranda’s penchant for earnest freestyling?)

Bareilles has written a tuneful score – with adventurous vocal lines and gorgeous harmonies. Her lyrics can be very sharp too, as in this one about an extramarital affair: “I didn’t plan it / But the light turned red, and I ran it.”

And yet, there are definitely moments where you can tell that she is a first-time dramatic songwriter. Her lyrics are sometimes too overlarded – and sense is occasionally sacrificed for a rhyme.

“If pies were books yours would be Shakespeare’s letters,” Dr. Pomatter sings at one point, trying to get to the word “better” – and it’s unclear if this is meant to signal he’s not as smart as he pretends to be, or if he’s uncovered a secret treasure trove of documents that would finally put that pesky authorship question to rest.

Perhaps Dr. Pomatter is being subtly undermined. I participated in a lively debate on Twitter over what to make of a scene in which the ob/gyn claims to have never heard the word “doula” before, despite having delivered over 500 babies. (I found it rang false, but I don’t want to be accused of mansplaining gynecology to an all-female creative team.)

These are minor quibbles. There’s a freshness to Paulus’s direction which takes on a shimmery, unreal quality when Jenna is struck by the pie-making muse and music erupts – and Lorin Latarro’s choreography is part of the recent welcome trend in Broadway musicals (Once, The Band’s Visit) toward emotionally resonant movement over razzmatazz.

A chorus of customers in the diner turn banal background gestures, like leaning elbows on the table or pouring sugar into a coffee cup, into dreamlike dances. They also at times echo the movements of the main characters in abstract worlds as if to accentuate that what’s happening to them – abuse, heartache – is simultaneously happening across America.

The performances are excellent in this tour – especially Dwyer, who displays a restrained vulnerability as Jenna. (She’s on holiday from Aug. 2-12, replaced by Desi Oakley.) The only one who seemed a bit out of tune was Richard Kline as the diner’s elderly owner, Joe, who I would describe as crusty under any circumstances, so it’s not a pun. It’s not Kline’s fault he’s playing a plot device with tired, horny-old-man jokes layered on top, mind you.

As far as movies turned into musicals, however, Waitress is mostly an artful, heartfelt adaptation, not one of those studio-driven monstrosities that are so clearly about getting more money from intellectual property. It feels homemade rather than dispensed from a vending machine. Oh, darn it.

Review
Shaw Festival 2019: The Ladykillers on stage only slays from time to time
Subscriber content
July 19, 2019 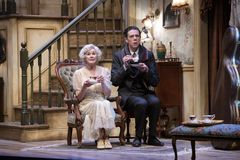