How is Robert Lepage spending his summer vacation from the massive reimagining of Wagner's Ring cycle for New York's Metropolitan Opera? He's tackling The Tempest at an outdoor amphitheatre in Wendake, a Huron-Wendat village that sits in the suburbs of his native Quebec City.

Summer Shakespeare in the open air is a tradition in this country from sea to shining sea, but few productions really take full advantage of the natural setting. Too often, it's simply Romeo and Juliet with bad acoustics and mosquitoes.

Not so with Lepage's wonderfully staged, first contact-themed La Tempête, a collaboration between his world-famous Ex Machina theatre company and the Huron-Wendat Nation.

Under his direction, Shakespeare's fantasy world spills out over the thrust stage and flows deep into the woods behind, which lighting designer Louis-Xavier Gagnon-Lebrun and sound designer Jean-Sébastien Côté have filled with hidden lights and speakers. Depending on the scene, the trees glow blue or pink or green and crickets or birds are heard, creating a truly enchanting environment.

Just behind a circle of tree trunks around the stage that conjure both ship's masts and totem poles, there is also a second platform where certain silent scenes take place.

As Jean Guy's gnome-like and appropriately addled Prospero explains to his daughter, Miranda, (the delicate Chantal Dupuis) how he was deposed as Duke of Milan by his brother, Antonio, (a mustache-twirling Frédérick Bouffard) with the help of Alonso the King of Naples, this backstory is enacted in mime behind them.

Later, from this island within his island, Prospero keeps an eye on the progress of the various friends and enemies he has shipwrecked on its shores.

Lepage has cast many of the characters for special skills rather than classical acting chops. Alonso's son, Ferdinard, for instance, is played by Francis Roberge, a talented " bucheron-acrobate," or lumberjack-acrobat, an artistic discipline unlikely to appear on anyone's résumé outside Quebec.

Roberge may deliver most of his lines as if he's proudly presenting an A-filled report card to his mother, but he is also terribly impressive in the scenes where he tosses about firewood and juggles an axe under the adoring gaze of Miranda.

Likewise, Steeve Gros-Louis may be a monotone Alonso, but the Wendake local adds to the production through traditional dance; he and his Sandokwa troupe make several appearances, entertaining the newly betrothed Ferdinand and Miranda with a deer dance that involves a thrilling clashing of antlers.

As for the clown Trinculo - here given the evocative French name Étranglé - circus performer Jean-François Faber, in his theatrical debut, not only drinks a barrel of wine but rides it off the stage afterward.

Having seen plenty of so-so Shakespearean performances by actors without any other compensatory talents, I can't say I minded the unevenness in the acting all that much.

In his own creations, Lepage has always been interested in intercultural contact, so no surprise then that The Tempest - which dates to around the founding of Quebec City - is his favourite work by Shakespeare. He has directed it twice before and will helm the Thomas Adès opera at the Met in 2012-13.

In his program notes, Lepage describes Shakespeare's reputedly final play as an "fantastical allegory" for the contact between the old and new worlds - staging it on first-nations land, then, is symbolically significant right from the get-go. (There are literary resonances too: Readers of Brave New World, which gets its title from Miranda's naive line, will recall that in that novel the plays of Shakespeare survived only on an Indian reserve.)

However, mixing allegory and historical reality, as Lepage does here, is problematic.

The spirit Ariel is played by Kathia Rock as a simple, childlike creature who floats magically into the air and sings the songs of the play in Innu (translated from Michel Garneau's French translation of the original). While Rock has a charming presence, there's something that doesn't sit quite right about equating a real people and culture with magical creatures.

The "monster" Caliban is more complicated - here, just one enslaved Huron among many whose matriarchal culture has been overthrown by the sometimes cruel, sometimes benevolent Prospero. Marco Poulin's richly human performance is no "noble savage" cliché, though, and his relationship with his magical master is complex.

Lepage's biggest brainstorm here is to have Prospero deliver his final speech not to the audience, but to the newly freed Caliban, now clutching the axe that Ferdinard had used to chop down his island's tree.

Having abjured his "rough magic," the tables have turned and Prospero is now at his former slave's mercy: "Now, 'tis true, I must be here confin'd by you or sent to Naples." The lights go down on Poulin's Caliban considering how to move forward after years of oppression, whether to seek revenge, sink into resentment or rise to reconciliation. There is tremendous power in this moment - it's a quandary we all still struggle with in Canada, first nations or not.

I'm not exactly sure whether such an interpretation would work as well in the original text, but it does liberated from its original language in Garneau's idiosyncratic version. Among the other liberties the translator-adaptor takes is the elimination of the Duke of Naples brother, Sebastian, with whom Antonio plots to murder their way to power. Antonio's conversations with him now take place with his own reflection in his sword or a pool of water. Sebastian's superfluous character is not missed at all; in fact, it tightens up this weakest of subplots.

On the whole, Lepage's Tempest is the most satisfyingly staged Tempest I've seen in recent years. There's plenty to marvel at on the spectacular surface and depths to ponder as well. 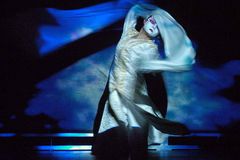