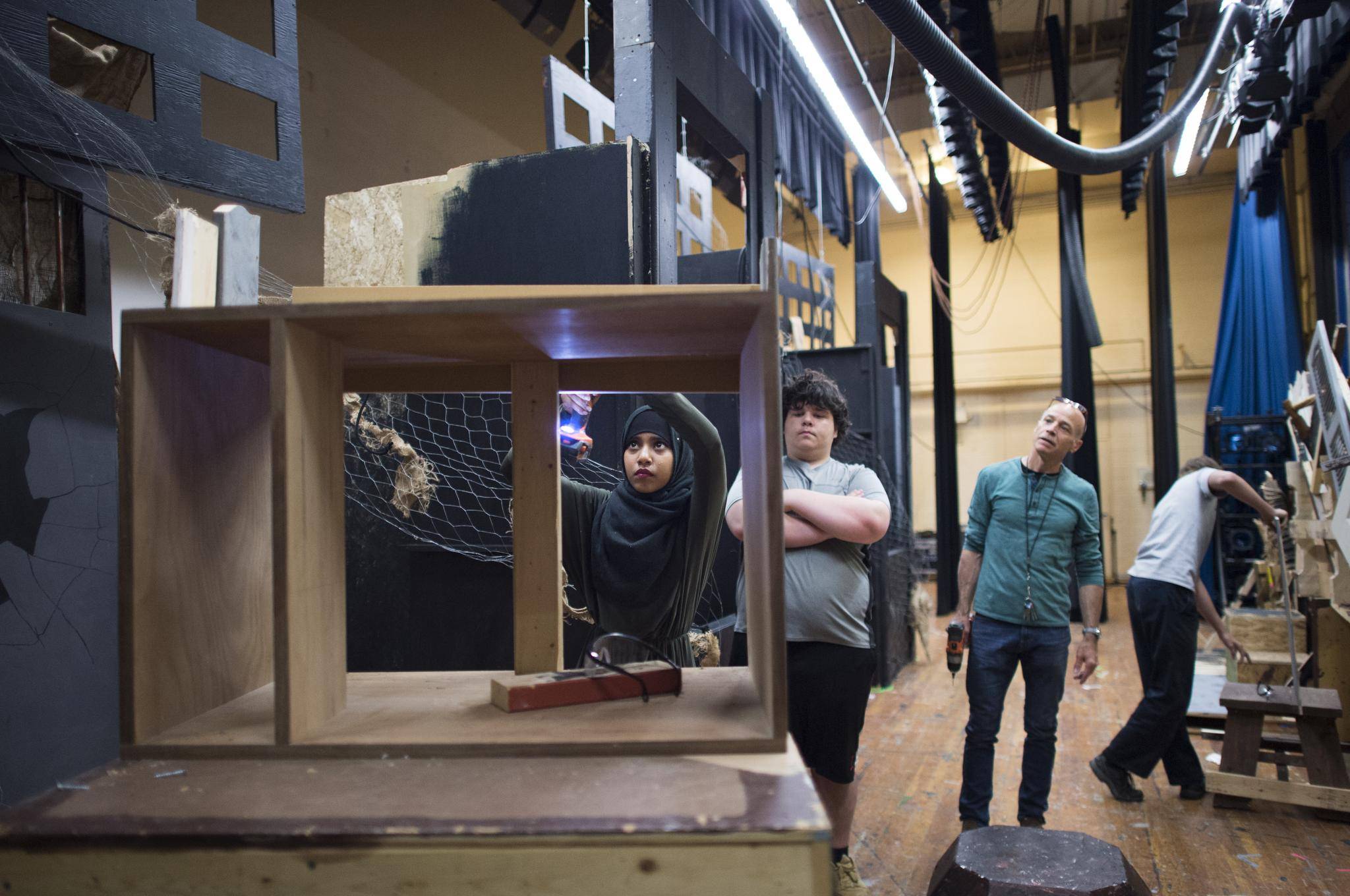 Lamisa Hasan, left, drills support pieces into the set with fellow student Nick Latincic, centre, and set construction teacher Timothy O'Hare at Lakeshore Collegiate Institute in Toronto on May 14, 2015. (All photos: Darren Calabrese for The Globe and Mail)


As J. Kelly Nestruck discovers at Lakeshore Collegiate, drama programs are increasingly shrinking in public schools. It might not only affect the future careers of artists, but the future of theatre itself

“How do you criticize something kids have done with tender loving care?”

Drama teacher Greg Danakas asks me this one day in May, standing on the stage of the auditorium at Lakeshore Collegiate Institute. I’m a critic by profession – but I don’t have an answer.

As opening night of Les Misérables gets closer and closer, more and more people become involved beyond Mr. Danakas’s Acting Class – and more and more elements move outside of his direct control. Cosmetology students are working on the hair and make-up; business students are planning front-of-house operations; and the after-school sewing club is making long, black skirts for all the young women to wear in Mr. D’s non-musical, dystopian take on Victor Hugo’s classic tale.

On top of that, Timothy O’Hare, Lakeshore’s shop teacher, runs an entire for-credit class devoted to the design and construction of the set. I pop by the Toronto high school one morning in early May to see them at work. Instead, I find a handful of students studying or on their phones under the supervision of a substitute teacher, while a documentary about the history of sneakers plays unwatched.

Mr. O’Hare – who is much-loved by his students and doesn’t seem to mind his nickname “Mr. No Hair” – is away with much of the class at the Ontario Technological Skills Competitions. Grade 11 students Lamisa Hasan, Nicholas Latincic and Shamar Shepherd – who all had to stay behind for various reasons – happily leave the doc behind to talk to me about how they collectively designed and built the Les Misérables set.

First, Mr. O’Hare played the movie version of the musical of Les Mis for the class – “a lot of singing,” is Shamar’s skeptical review. Then, after looking up “dystopian” in the dictionary and discussing its definition, the students started to brainstorm.

The barricades for the famous climax were built out of old pieces of furniture and scrap wood found in the Lakeshore basement. “We had an outline of the set the way Mr. Danakas wanted it and then we worked around it,” Lamisa, who also takes drama, but isn’t in the acting class because she doesn’t like performing in front of audiences, explains.

As for the black-and-white scenery flats, four feet by eight feet, three were designed in an inclusive way: Each student suggested ideas and then the best were voted on by the class. “One represents Jean Valjean’s time in jail, one represents the outdoors and one represents the broken society of the play,” Nicholas, who is also in the acting class playing a revolutionary named Champmathieu, explains. Shamar’s design was chosen for the outdoor scenes – a haunting silhouette of a bare tree with a crow sitting on a branch. A little bit Beckett, a little bit Poe, the flat is bleak in a way that contrasts with its designer’s cheerful, positive demeanour.

After spending a couple years away at a boarding school, Shamar, who wants to be a carpenter and eventually own his own business, recently returned to the neighbourhood where he grew up. “It’s like one of those TV episodes where you see everyone grown up all of the sudden,” he says. “It’s weird.” 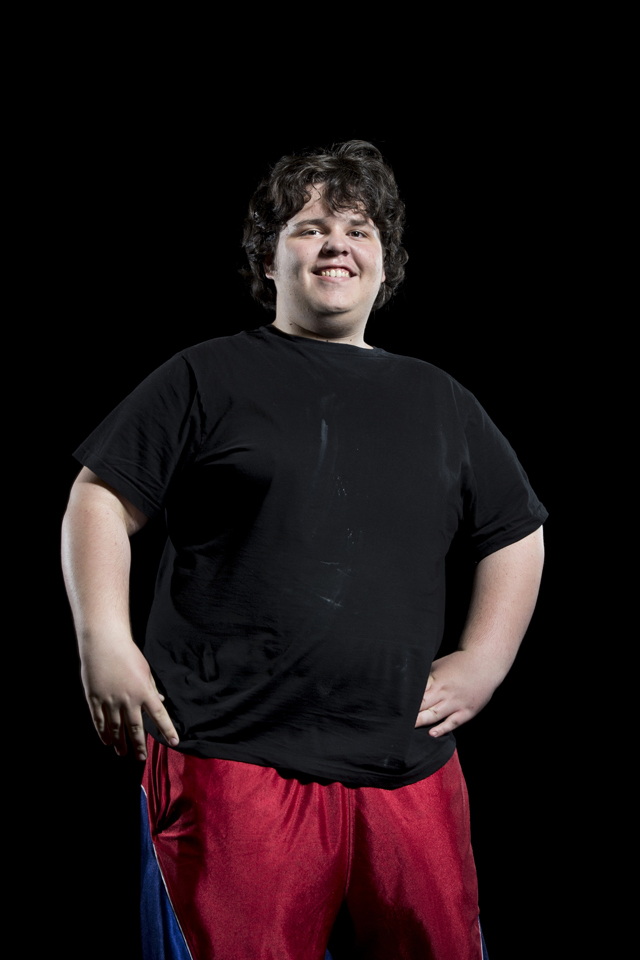 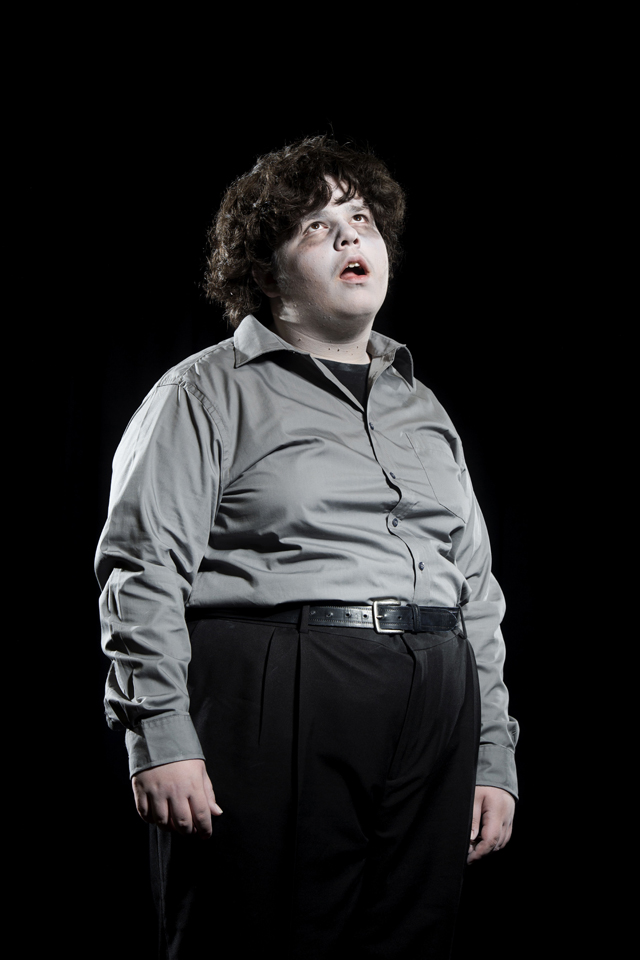 Dropping by Lakeshore’s drama studio a few days later, Mr. Danakas is nowhere to be found – but there are other adult volunteers from the community on hand. Kirsten Souwand, a former actress who helps Mr. D, is in charge of the rehearsal and is honing a key confrontation scene between Jean Valjean and Inspector Javert with actors Bradley Plesa and Gabriel Valencia.

Meanwhile, Dan Souwand, Kirsten’s husband, is unloading a U-Haul full of lighting equipment donated by his company, Christie Lites. He tells me Mr. D is in the “aud” and shows me the way.

“I had a drama teacher who kept me out of trouble,” Souwand, who grew up in blue-collar Sarnia, Ont., and now is vice-president operations at Christie Lites, says. “She kept me in school until I graduated – and then helped me get my first job in tech.” Now, Souwand is paying it forward – doing the lighting design and mentoring the Grade 10 lighting technician, Elliot Robson.

In the auditorium, Mr. Danakas is found on stage with another volunteer industry professional – David Charles, currently the on-set decorator on the TV series Reign – and their conversation falls to a hush as we enter.

Charles designed the sets for Mr. D’s productions of The Trojan Women and The Three Musketeers. “They were spectacular,” Mr. Danakas tells me by way of introduction. “They were Stratford quality.”

What the set class has recently moved into the aud isn’t quite up to that level: The barricades are too short and look as imposing as picket fences, while the painted scenery floats in an otherwise bare stage. “I asked David here for some artistic consultation,” Mr. Danakas says, diplomatically.

I understand where Mr. D is coming from the more I learn about Lakeshore. Formed when three local schools were merged in the 1980s, the public school’s population has been shrinking again in recent years. At its peak, about 1,100 students roamed the halls, but now enrolment is down to 650.

This is mostly due to demographics – and Lakeshore is expected to grow again soon – but another factor in the decline is also the increased popularity of magnet schools in the public system such as nearby Etobicoke School of the Arts.

“It doesn’t matter if it’s arts or not, everyone’s looking to have their son or daughter go into a special something,” Allan Easton, Lakeshore’s new principal, says to me one day over lunch. “We’re all marketing for students, especially as there are fewer and fewer students – and so you need to have some programs that you can market.” 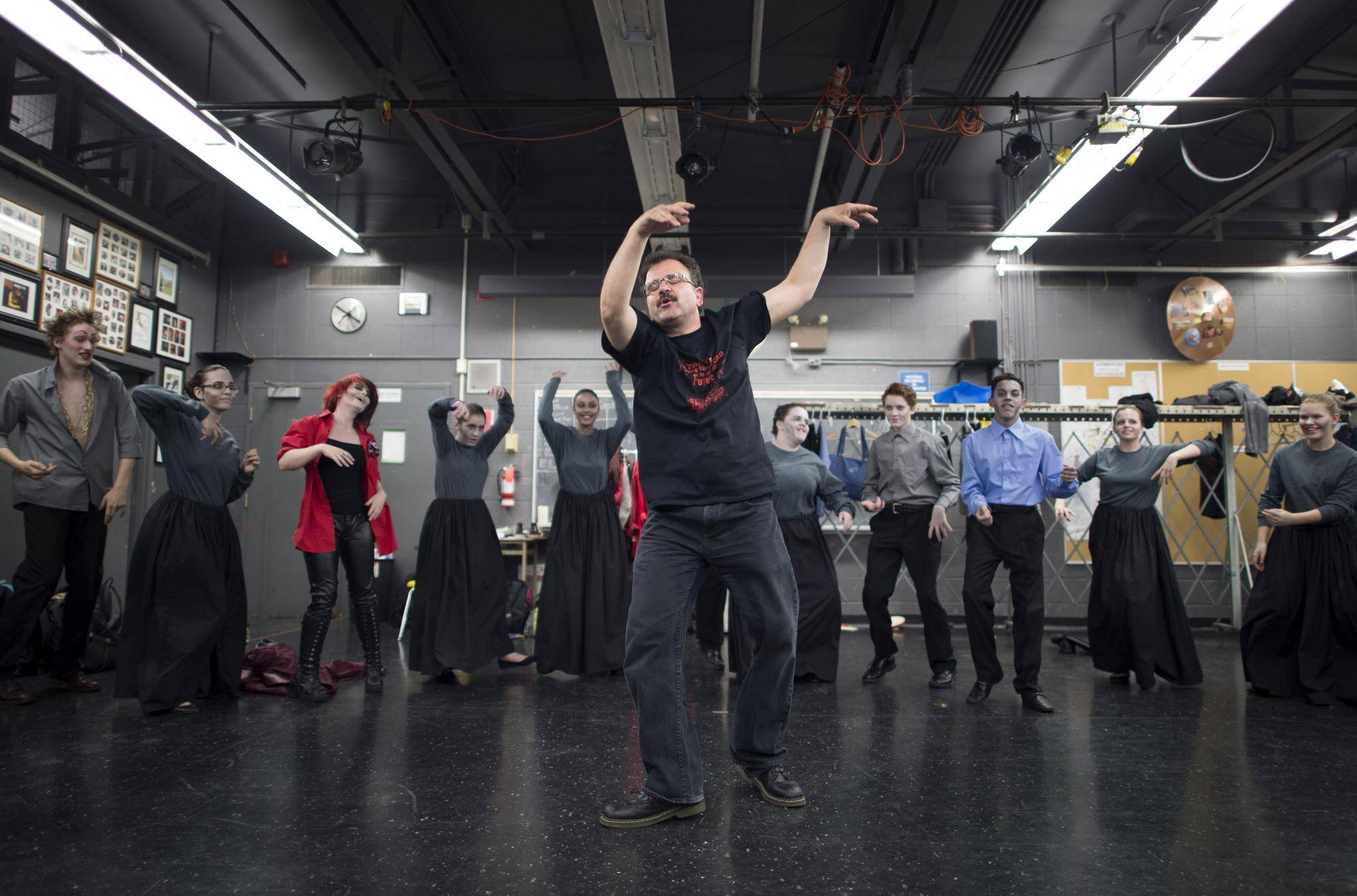 Mr. Danakas flails his arms and legs wildly while leading the students through a warm-up on opening night.

Mr. Danakas’s remarkable drama program is definitely marketable – after arriving at the high school in 1998, he built it up from four sections to 10 and added all sorts of extracurricular activities that he doesn’t get paid to run.

Adult professionals donating time and material – such as David Charles and Dan Souwand – help Lakeshore punch above its weight and compete with the magnet schools.

My own fear about drama getting smaller in regular public schools like Lakeshore is that it limits the ability of kids to stumble upon it – and that affects not just future theatre professionals, but future theatre audiences.

The set class is full of students who have only seen plays because of Mr. Danakas: His student production of The Three Musketeers was the first play Shamar ever saw. Likewise, Lamisa’s family never took her to plays, but she’s gone to every one of Lakeshore’s productions and visited Toronto’s Factory Theatre on a trip with the set class.

They have other professional plans – but I’d love to see more Torontonians like them in audiences down the line. 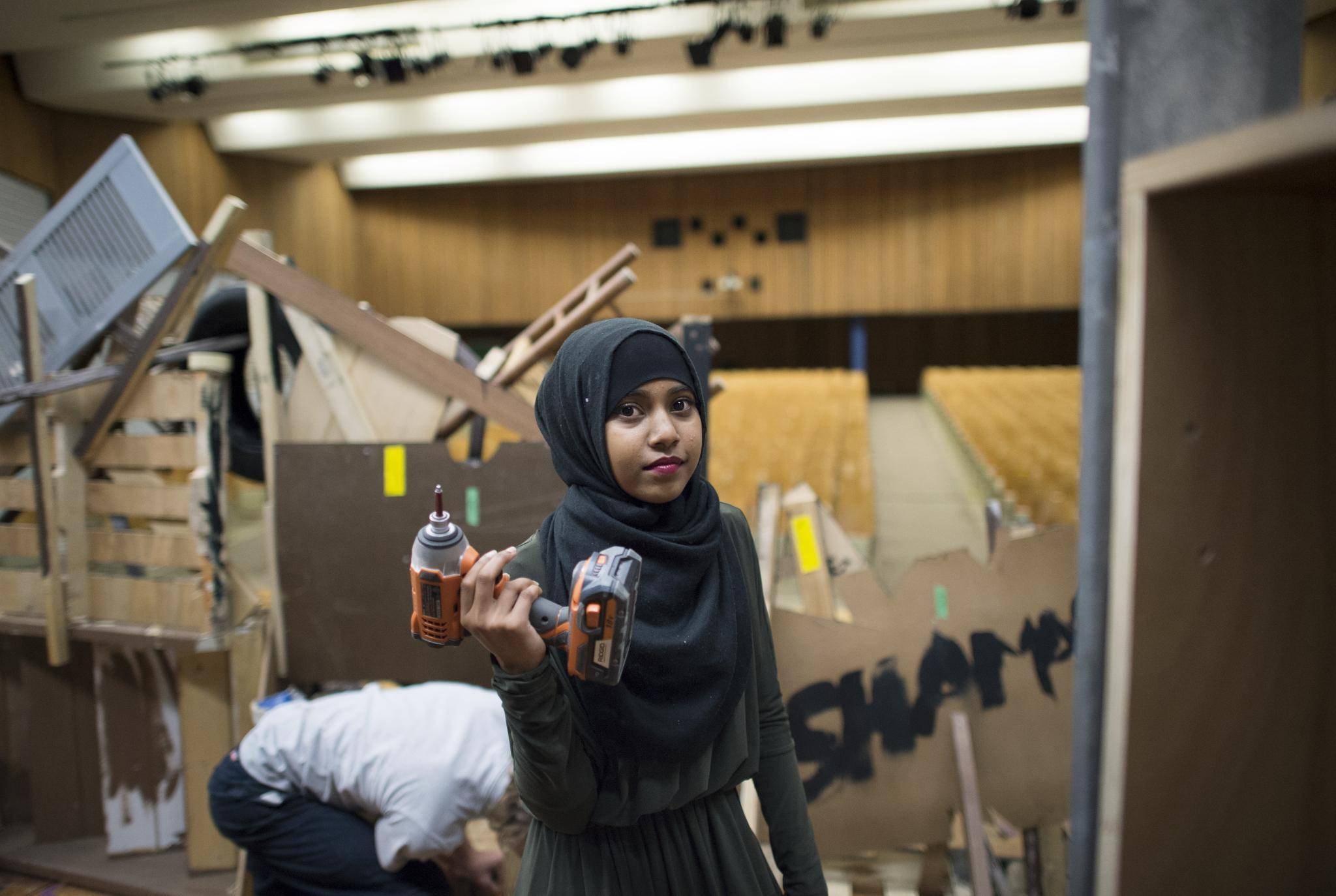 Lamisa Hasan, a Grade 11 student at Lakeshore Collegiate, takes drama but prefers a role behind the scenes to performing in front of audiences.

On my second attempt to visit the set class, Mr. O’Hare is back and his students are all hard at work in the auditorium painting and building up the barricades.

Charles has done a superb job of filling out the space around them, adding hanging burlap and chicken wire and a giant industrial tube that snakes its way above the stage like an abandoned warehouse. It all looks particularly impressive when Souwand’s truck full of professional lighting equipment makes it glow ominously.

The scenery flats the set class has painted have faded a little into the background, however. I find Shamar to ask what he thinks.

“He kind of just took our idea and give it his touch,” he says, after giving it some thought and really taking in the environment. “He added on to our stuff.”

But then he looks a little closer at his flat. “Oh man, they covered my crow,” Shamar says, noticing that a piece of cloth is hanging over it. “I’m going to ask if we can move that.” 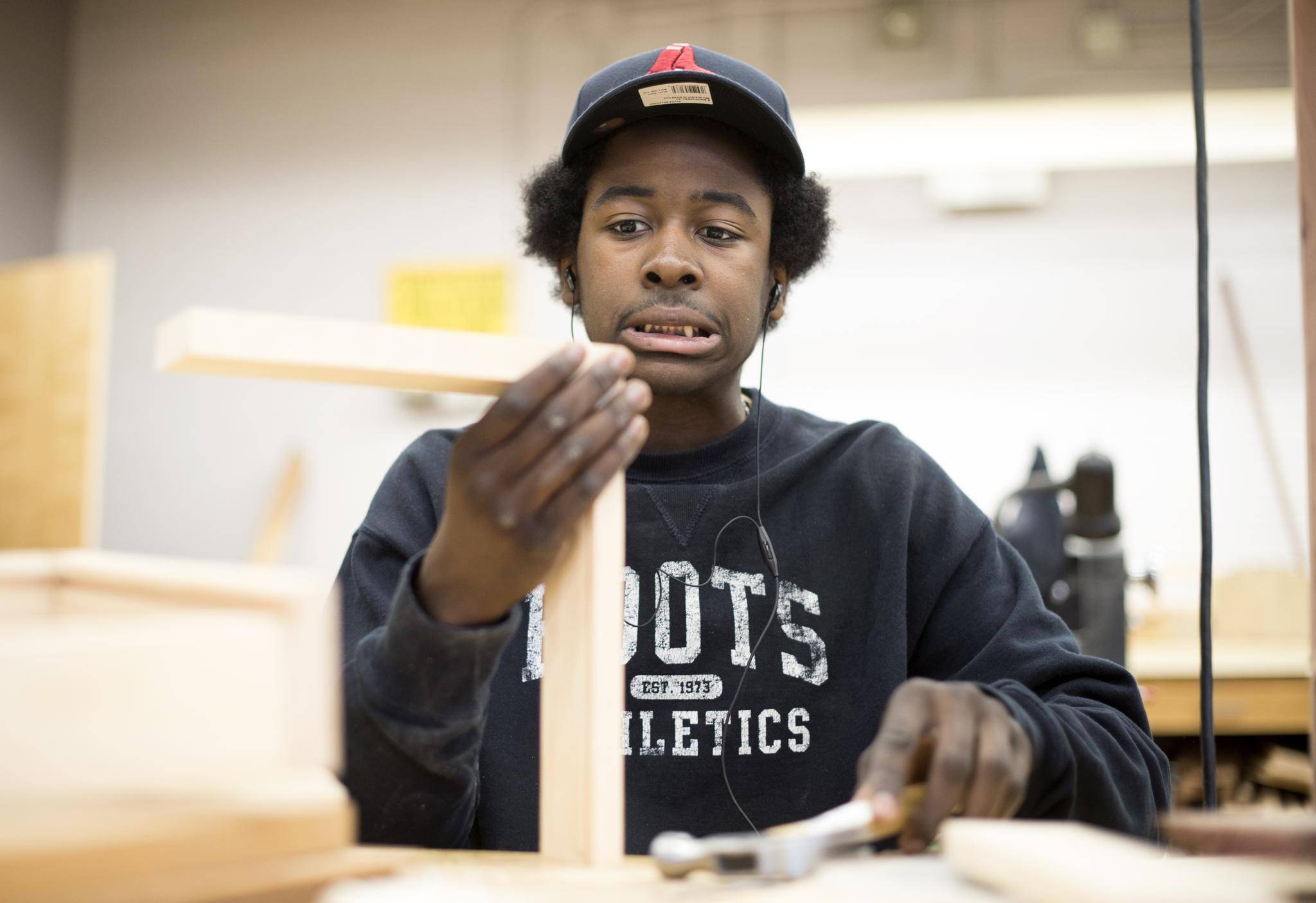 Shamar Shepherd’s design was chosen for the outdoor scenes of Les Misérables. Eventually, Shamar wants to be a carpenter and own his own business.
Follow J. Kelly Nestruck on Twitter @nestruck
Report an error Editorial code of conduct
Due to technical reasons, we have temporarily removed commenting from our articles. We hope to have this fixed soon. Thank you for your patience. If you are looking to give feedback on our new site, please send it along to feedback@globeandmail.com. If you want to write a letter to the editor, please forward to letters@globeandmail.com.
Comments