Revolutionary change is coming, from all angles, to the Shaw Festival in Niagara-on-the-Lake, Ont.

By the end of 2015, North America's second-largest repertory theatre company will announce Jackie Maxwell's successor as artistic director, Elaine Calder's replacement as executive director and, if the new leaders are up to it, a concrete plan to build two brand-new theatres on a tract of land the festival purchased for $4.5-million on Dec. 30.

It's anyone's guess as to who could lead that development. Will the festival find a way to progress from its current precarious plateau under "reasonable" or "unreasonable" leadership?

On Friday, the board of governors held its annual general meeting and delivered a snapshot of the health of the festival named and once devoted to Bernard Shaw, but that now primarily uses the contrarian Irish playwright as a mascot.

Financially, Shaw is in the best shape it has been since Maxwell took over in 2003, with an $815,000 operating surplus for the 2014 season finally burying the festival's long-standing accumulated deficit. It's in the black, across the board.

Attendance-wise, however, the picture is less clear – and that is, alas, where clarity would be helpful at this crucial juncture.

Last season, the Shaw Festival sold the second-lowest number of tickets since Maxwell took the reins: 249,059. Is that a poor performance? Not when it's put into context, but it is going to be harder to cajole governments and donors into funding new, up-to-date facilities to replace the crumbling, 313-seat Royal George Theatre and the inaccessible 327-seat Court House Theatre when attendance is, at best, stagnant. As Calder understates, "We'd like the trend to go the other way."

It's obvious who the Shaw needs to replace Calder: a leader who will stick around for at least a decade and has the experience and enthusiasm to spearhead a capital campaign and the estimated $45-million building project.

But what kind of leadership is needed to replace Maxwell, who has, over 12 seasons, overseen a gradual expansion of the festival from a focused but mouldy mandate to stage the works of Shaw and his contemporaries to an eclectic one that includes all of the above plus Canadian dramas, foreign plays written since 1950 and well-known musicals?

The 10-member search committee headed by board member and corporate lawyer Peter Jewett of Torys LLP is keeping mum about the criteria for Maxwell's successor. (Members include performer Patrick Galligan; Mary Hofstetter, formerly of the Banff Centre; and Chris Lorway, formerly of Luminato.) Calder hints that a new artistic director will need to be able to help shepherd the building project, too. "If there were ever a time when artistic directors just worried about the art, those days are long gone," she says.

For the festival's audience – and potential audience – the art that will go on in that building is of paramount importance, however. What will bring more people in?

If Maxwell had steadily grown attendance over the past 13 years with her artistic direction, it would be easy to endorse a replacement who would follow in her footsteps. Likewise, if it were clear that Maxwell's vision was responsible for the past decade's slow downward trend or stagnation in attendance, it would be equally clear a radical shake-up was needed.

Instead, it's devilishly difficult to look at the data and say what effect Maxwell's programming has had on ticket sales.

The conventional wisdom is that Maxwell was an "unreasonable" leader at the start of her tenure in 2003 – specifically in programming Quebec playwright Michel Marc Bouchard's The Coronation Voyage on the main stage in her first season. Ticket sales dropped by 25,000 to 289,989 – and the festival ended the year with a $3-million deficit. With the benefit of hindsight, though, it's apparent the only real problem with that season was with budgeting.

At the Stratford Festival, a repertory, tourist-oriented company about twice the size, attendance declined by 63,000 between 2002 and 2003, and by a further 40,000 the following season, despite no change in leadership or direction.

Shaw and Stratford may have yo-yo-ed in attendance in individual years, but over the long term they have both been on roughly a similar trajectory, each shedding roughly one-sixth of their ticket sales since 2002 (much of that coming from existing audience members buying fewer tickets).

It may be a cultural-tourism thing. SARS, changes to border restrictions and especially the then-high Canadian dollar may have had more to do with long-term attendance trends than anything Maxwell has put on the stages. Certainly, we'll get to test that theory in 2015, as both festivals hope the weakening loonie restores some of the cross-border audience of the past – and encourages more Canadians to vacation at home.

It's no easier to tell what programming picks are safe going forward, as the AGM's breakdown of 2014's hits and disappointments suggests.

In the 856-seat Festival Theatre, director Peter Hinton's challenging take on Cabaret beat its box-office targets despite skeptical reviews, while Dennis Garnhum's safe but solid production of The Philadelphia Story – meant to be a safe hedge against the Cabaret risk – underperformed.

On the other hand, Eda Holmes's critically acclaimed production of the unnerving modern classic The Sea did not sell well, while Joseph Ziegler's warm production of J.B. Priestley's chestnut When We Are Married was extended.

Twist that around in your head and it's difficult to draw any conclusions about what Shaw audiences hunger for: cosy, edgy or both.

All four directors of these production are widely considered candidates for the top position at Shaw – though the committee "has received interest from across North America and from overseas," according to a quote from Jewett supplied by a publicist.

But whom to pick – the reasonable choice or unreasonable one? Ultimately, if increasing attendance is the only goal, you might as well flip a coin. And, if it's a loonie, hope it falls.

Will Progress succeed, or is Toronto overloaded with global theatre?
January 30, 2015 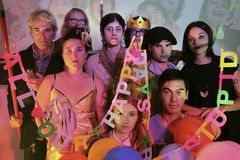 Theatre company Fight With A Stick debuts at PuSh with Steppenwolf
January 29, 2015 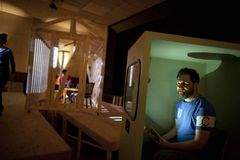