Is The Just by Albert Camus an unjustly neglected classic of 20th-century theatre?

Director Frank Cox-O'Connell believes the French philosopher's drama about terrorists plotting an assassination in 1905 Moscow deserves to be better known in the English-speaking theatre world. And with his new production of a fresh translation by Bobby Theodore opening at Soulpepper this week, he's aiming to prove that the 1949 play is more than just part of an intellectual rivalry with Jean-Paul Sartre, but a gripping piece of naturalistic theatre in its own right.

"It's an excellent play, not just a great piece of philosophical writing," says Cox-O'Connell. "I think it speaks to the importance of translation … and the haphazard way in which we construct a canon."

To hear Cox-O'Connell talk about constructing canons – and having a role to play in the act – is certainly a change. The tall, intense 32-year-old has long been an integral part of Toronto's vibrant indie scene, creating exciting, form-forward new work with companies such as Public Recordings and Small Wooden Shoe.

But Cox-O'Connell has crossed over into the mainstream of Toronto theatre in the past couple of years. As an actor, he's popped up in Hedda Gabler at Canadian Stage and will take the role of Hamlet this summer at the company's stage in High Park. With The Just, he's making his directorial debut at Soulpepper after completing a two-year mentorship with Daniel Brooks as part of the company's Academy training program.

Indeed, it was that Siminovitch Prize-winning director who challenged Cox-O'Connell to stage a text without intervening in it – which immediately made him remember Camus's The Just (known in French as Les justes). Cox-O'Connell has loved this play, by the author of the novel L'Étranger, since he first stumbled upon a creaky British translation (The Just Assassins) in the library at the National Theatre School in Montreal.

It was 2002, near the start of the War on Terror, and the young acting student read the thriller about four men and a woman plotting against the tyrannous Grand Duke Sergei Alexandrovich as a "call to arms to those who want real change in their society." Flash-forward a decade, however, and when Cox-O'Connell returned to the play, he was surprised to discover that it seemed more like "a cautionary tale about the cost of violent resistance."

So what is The Just? After working on Theodore's new translation with a cast of Soulpepper actors that includes Gregory Prest, Raquel Duffy and Diego Matamoros, Cox-O'Connell has come to realize that, like Hamlet, it does not come to any clear conclusions about the human cost of violence.

"I don't think there is a clean reading of it," Cox-O'Connell says. "Albert Camus wrote it as a way of working things out – he was struggling with the questions in the play and he was deeply troubled by them."

In fact, Camus sticks very closely to the real-life details of what went down in the cell of idealists, extremists and realists who blew up the Grand Duke, the Czar's uncle, in 1905, including an assassination attempt – two days before the successful one – that had to be aborted when the terrorist who was to throw the first bomb spotted children nearby at the last minute.

Perhaps the most shocking scene in The Just comes as the terrorists turn on each other after that aborted attack. "The day we decide to forget about children, we'll rule the world and the revolution will be victorious," says Stepan, the most extreme of the terrorists, to Yanek, the one who balked and who is the hero of the play, according to Camus's journals, because he doubts until the very end.

While The Just is set during the Russian revolution of 1905, it was very much informed by the wide-open debates between artists and intellectuals of postwar Paris, shaped by their experiences under Nazi occupation.

Leftists who had banded together during the French resistance began to split apart when faced with new revolutions. What shape should resistance take in countries that had fallen behind the Iron Curtain? What about French-occupied colonies such as Algeria?

The most notable rivalry to crop up at the time was between Camus, born to an illiterate house cleaner in French Algeria, and his one-time friend, the philosopher and playwright Jean-Paul Sartre, who came from a bourgeois, Parisian background. The two would famously fall out in a bitter public dispute after the publication of Camus's humanist treatise The Rebel (L'Homme revolté) in 1952, divided over Stalin's labour camps and the role of violence in Algerian independence. But much of this had been previewed years earlier on the stages of Paris. In 1948, Sartre had premiered a play, also about the assassination of a politician (in the fictional Hungary-like country of Illyria), called Les Mains sales (Dirty Hands).

The Just's role as a response or rebuttal to Sartre's play has kept it alive in university departments, but Cox-O'Connell sees it as a drama that exists beyond the acrimonious debate between the two future Nobel laureates.

"The impetus to start the play may have been a response to Sartre, but I really do believe [Camus] was mostly in conflict with himself," he says. "That's clear in this piece – how fair a fight he makes things between the extremists and the realists and the idealists."

It's certainly not difficult to find contemporary resonances in The Just: Theodore's translation was workshopped at Soulpepper during the recent co-ordinated attacks in Paris. "There's for sure a line that runs from Camus's birth straight to contemporary French terror that has a lot of its roots in Algeria," Cox-O'Connell notes.

In the indie world, Cox-O'Connell has worked before to highlight the relevance of texts – creating, for example, a show about the war in Afghanistan called Little Iliad (based on Sophocles's Philoctetes) with his creative partner Evan Webber. (It toured across Canada and abroad to Ireland, Japan and Australia.)

This time around, he has found the play's obvious relevance "difficult to contend with" and is mainly thinking about these five people, bodies in a room, planning to blow a person up.

"There's a desire to celebrate the relevance, especially as an artist, to be working on something that speaks to now," he says. "But I've been trying to push past that and ask the question 'What does this mean that it's still relevant?' as opposed to just sitting in that simple fact."

The Just runs at Soulpepper until March 26 (soulpepper.ca).

Theatre Review
Salt-Water Moon is an irresistible reimagining of a Canadian classic
October 19, 2017 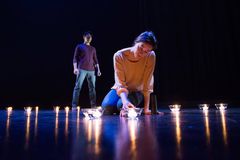 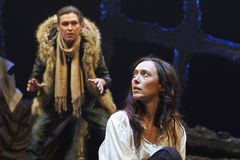