The musical Strictly Ballroom, which is making its North American premiere at Toronto's Princess of Wales Theatre, has been a long time coming. Originally a short play, the story about the world of Australian competitive hoofing was adapted by Baz Luhrmann for his flashy 1992 film. In 2014, Luhrmann reinvented it as a glittering musical that received mixed reviews in kangaroo country. A revamped production helmed by the London-based dance phenom Drew McOnie fared better in England late last year. The Globe and Mail spoke with director-choreographer McOnie in Toronto.

You were brought on board for Strictly Ballroom after Baz Luhrmann had already premiered it in Australia. How did that come together?

I was a voyeur from afar on the Australian production. I followed it quite closely. Then I got a call from the Australian producers asking me if I wanted to come out to have a look at the show. I jumped at the chance. Baz had decided that in order to allow the show to become what he wanted it to be, it required someone to come and approach it from the point of someone who was a fan and who had followed it as a cult film.

From what I understand, you fit that qualification and then some.

The film Strictly Ballroom actually led me want to make shows of my own. I was a competing dancer right from the age of 6 or 7. I had a tendency to forget my choreography. I would go out on stage and make it up myself. I felt repressed by the rules and regulations of technical dance. When I saw the film, I resonated with the character Scott, because I saw myself in his struggle. The film played a big part in me wanting to carry on making up my own steps and having my own voice, and very much led to me having my own dance company in London, and making dance-theatre pieces and dance-heavy musicals.

Isn't there an inherent stifling for a creator, though? I mean, "strictly ballroom." The title is flat out telling you what you can and can't do, isn't it?

The concept of Strictly Ballroom does present a set of rules and regulations. There is a limiting quality to the form. The story revolves around a maverick dancer, who is a choreographer and creator himself. He yearns for individuality, and a unique form of expression. Through his journey and his aspirations, you get to see rules exploded into different forms. And that's what drew me to the project.

I was absolutely terrified. I love his other films as well. What was really fascinating was that, at the core, he just wanted to know I cared about Strictly Ballroom. I went in expecting to be drilled on every line of the movie. But we didn't really talk about that.

I'm interested in your take of the Guardian review of the production's U.K. premiere in Leeds late last year. The critic noted "sublime dancing …"

People seem to enjoy it. So, yeah, I agree with that.

It's very joyous. People seem to come out very happy.

Yeah, I kind of agree with that. The joy, the heart, the kind of brilliance of the story is that it's bonkers. This is a group of people who have given up their lives to this constant pursuit of dance perfection, you know? It could be about any form of escapist expression. The story could be about ice skaters. It could be about scuba divers.

And, as you say, it could be about Drew McOnie.

So, it's the passion that's ridiculous, not just the sequins and feathers?

Absolutely. It's the stakes. The stakes are so high, for so many sequins. I think that's the joy of it. 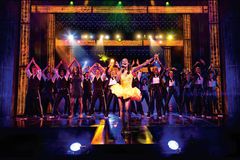