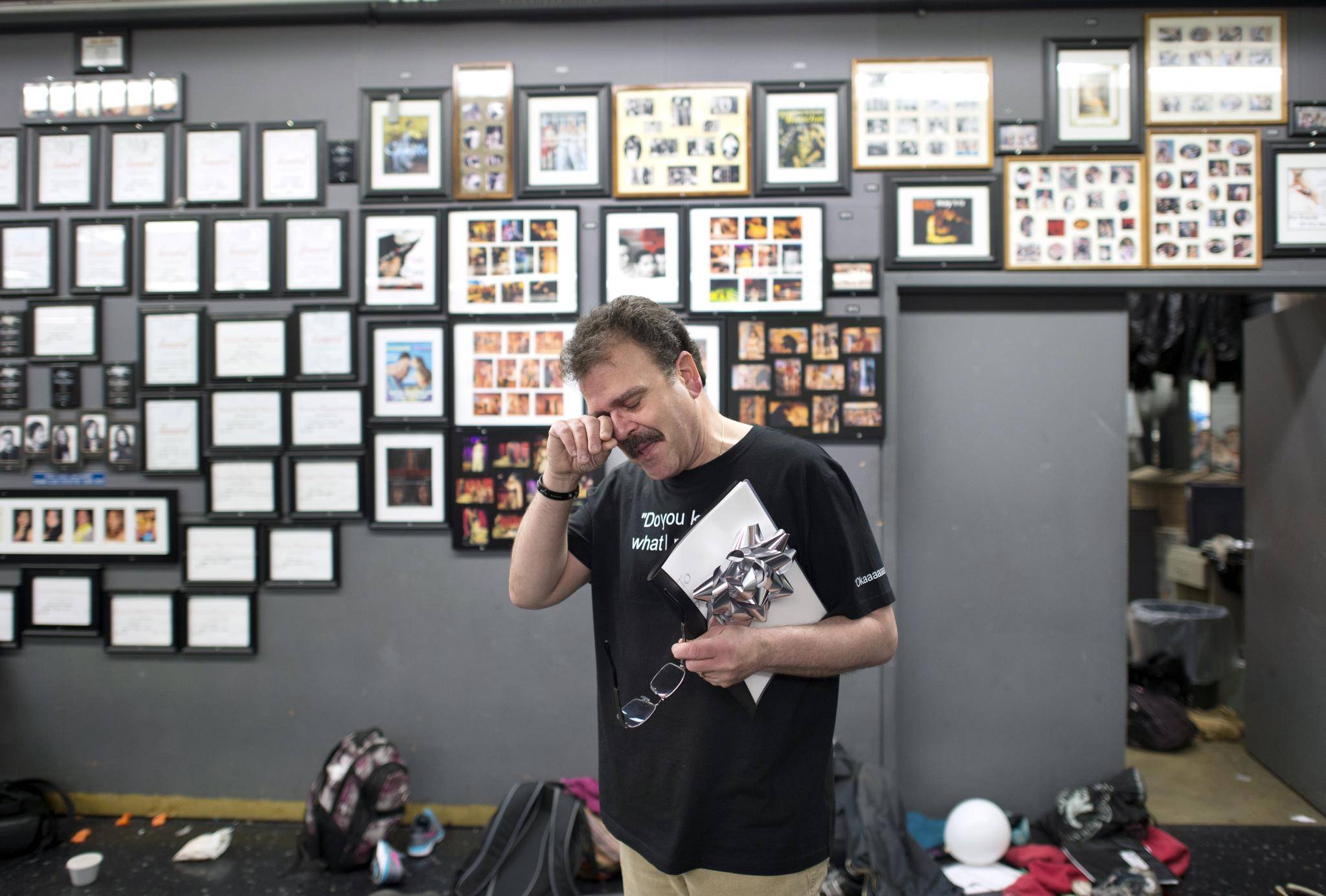 Greg Danakas, the dramatic arts teacher at Lakeshore Collegiate, wipes away tears after being surprised with a 50th birthday party by students past and present on May 13, 2015. (All photos: Darren Calabrese for The Globe and Mail)


It’s easy to become discouraged by how often bureaucracy puts up roadblocks in the way of art. This week’s report from Lakeshore Collegiate shows those obstacles can start at the high school level

Monseigneur Myriel puts down the silver candlesticks he is going to gift to the thief Jean Valjean – and, as a beat begins to fill the room, starts to shake his stuff.

Iggy Azalea raps over the sound system of Lakeshore Collegiate Institute’s auditorium as Joey Gratkowski – the Grade 12 student playing Myriel in the high school’s dystopian production of Les Misérables – attempts to twerk in a bishop’s robes and mitre.

After three months in the drama studio, Greg Danakas and his class have moved into the auditorium for a series of dress rehearsals leading up to opening night – and the cast is in full costume, makeup and overflowing with energy.

Once everyone has stopped twerking and talking, Mr. Danakas delivers one of his prerehearsal pep talks – but also a piece of bad news. “There will not be a Grade 7/8 matinee, so Tuesday you go to all your classes,” he announces, to widespread disappointment.

Now Les Mis will have only three performances in front of an audience. Last year, two classes visiting from nearby middle schools were escorted out of Lakeshore’s matinee of The Three Musketeers by their teachers due to the sexual buffoonery on stage. But Mr. Danakas hasn’t been given a clear reason as to why the performance for the local feeder schools isn’t happening this year.

“There was no definitive answer,” he tells me. “I don’t know if it was because of offensiveness, or because of the [Elementary Teachers’ Federation of Ontario’s] work-to-rule, or because of conflicts … ”

As I learned later, the matinee was primarily cancelled due to scheduling conflicts – the bureaucratic back and forth between administrators over content and consent forms went on until, as Lakeshore’s principal, Allan Easton, put it to me in an e-mail, “It didn’t matter as we all got too busy.” 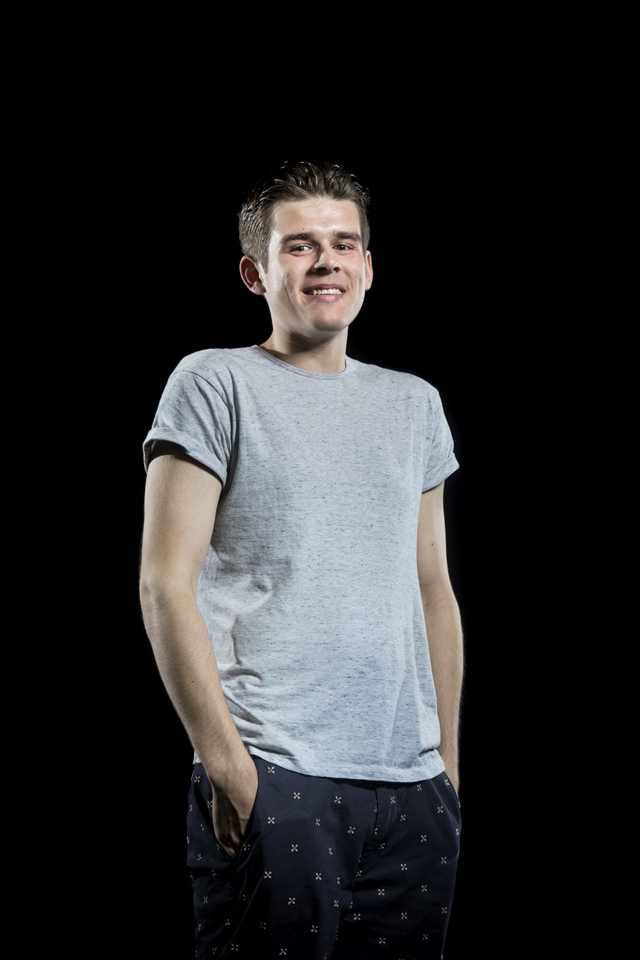 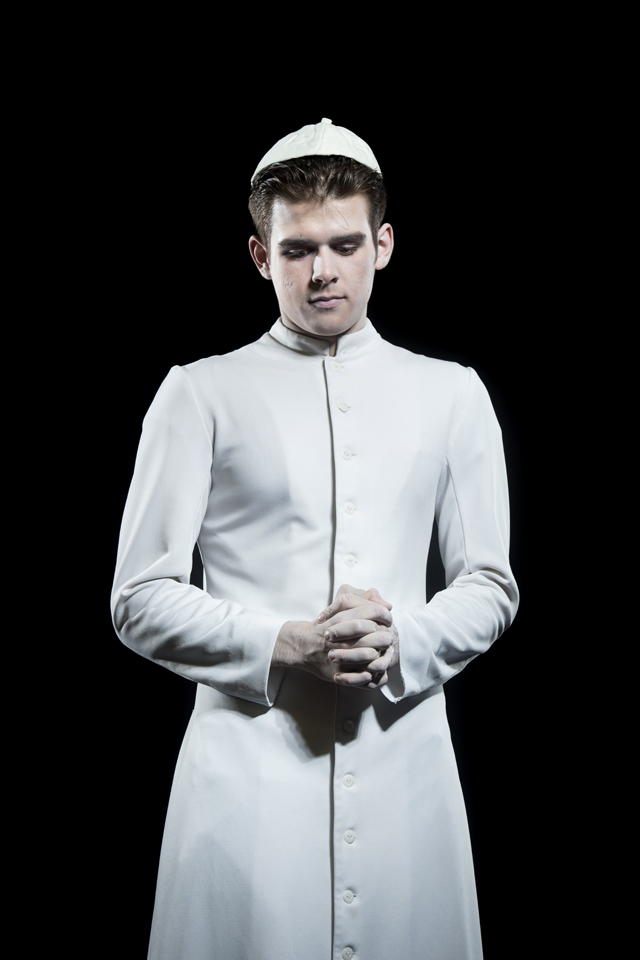 TOO BUSY TO EAT

When I came to Lakeshore three months earlier, I was hoping to reconnect with theatre in a purer form. Writing about professional theatre in Canada for a decade, I’ve been discouraged by how often bureaucracy – whether in the form of Byzantine funding bodies, intransigent artists’ unions or timorous boards of directors – puts up road blocks in the way of art.

There are times when it seems actors and directors spend more time filling out grant applications than acting or directing – and that those best at navigating red tape get ahead. Too frequently artistic directors are hired for their fundraising skills rather than their vision.

Greg Danakas went back to school to become a teacher after his own disillusionment with professional theatre. The first of his family to go to university, he studied acting at York and co-founded the (still existent) Modern Times Stage Company while there. But after acting in Canadian plays and avant-garde work as a student, he graduated into the age of the megamusical. It was the late 1980s and Toronto theatre culture was at its most commercial moment – with Mirvish Productions and Garth Drabinsky’s Livent in fierce competition. Mr. Danakas found it uninspiring.

After a few years, he began to wonder what he was doing – and had his Road to Damascus moment in an audition room trying to get a part in a music video for the Northern Pikes song She Ain’t Pretty. “What am I contributing to the world?” he asked himself. It was one of his part-time jobs at a fine-arts camp that helped Mr. Danakas rediscover his love of theatre – and decide to teach full-time. “Can you imagine a place where kids just wanted to do drama?” he told me over lunch after Les Misérables had closed. “That’s a beautiful life!”

It’s not as idyllic in reality, of course. Mr. Danakas didn’t have time to tell me his back story while in rehearsals because when he wasn’t teaching or directing, he was trying to navigate Lakeshore’s own bureaucracy – recalculating the budget or, with a week to go, still trying to find out if he could paint the floor of the auditorium stage or use a fog machine.

“I’m getting pressure from the principal that I’m spending too much money,” he tells me during rehearsals – eyeing some cookies that had been bought for Cosette and Marius’s wedding scene, but knowing he shouldn’t eat them. “I haven’t had a lunch hour for the entire month of May.”

MORE ON THEIR MINDS

Halfway through the show’s first dress rehearsal, Mr. Danakas seems elated with how Les Misérables is coming along – the first act clocked in at just one hour and 20 minutes. “Every time we do Act One, it takes six hours,” he marvels, before heading out to Tim Hortons. (He has high blood pressure, but has switched from decaf to caffeinated coffee in the lead-up to opening.) 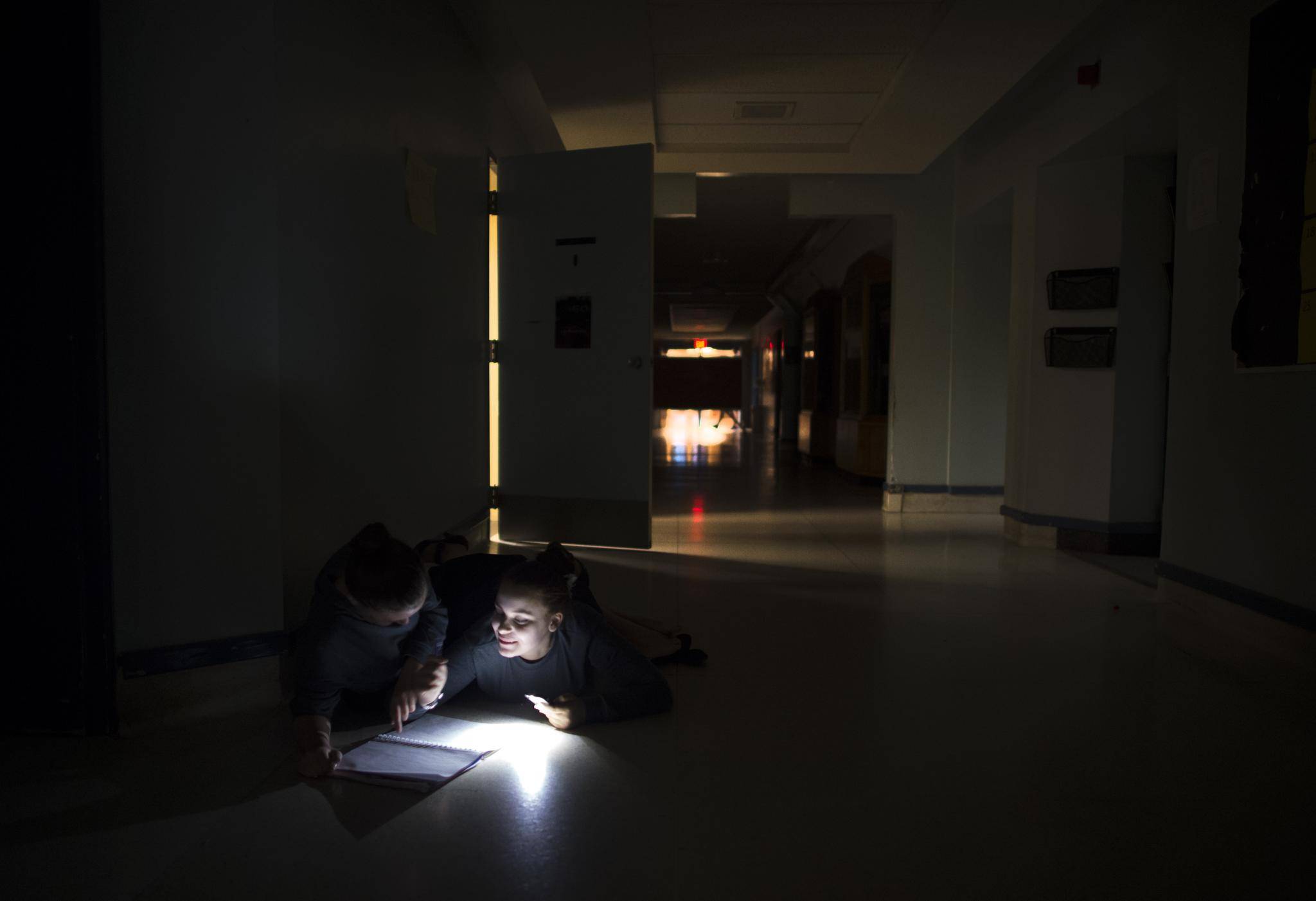 Hilliary Lyn, right, writes her graduating speech with Faye Schatz in the hallway between scenes on closing night at Lakeshore Collegiate Institute.

Not everyone shares his optimism, however. Bradley Plesa, the former cadet playing Jean Valjean, is in an uncharacteristically bad mood. “This is the worst dress rehearsal I have ever been a part of,” he says. “It’s a week to performance and people still don’t know their lines.”

Many Lakeshore students have more than just Les Misérables on their minds, though – especially Grade 12 students with prom and postsecondary plans looming. Bradley has recently been accepted into York’s Department of Theatre – and like Mr. Danakas, he’ll be the first in his family to go to university. It’s a big accomplishment: The dyslexic 18-year-old was once told by a middle school guidance counsellor that he shouldn’t plan for university.

Theatre helped him get there – and particularly an elementary teacher named Miss Montgomery. “I was, like, three years behind in English in Grade 5 – and the only way she got me to learn was through doing skits,” he explains.

Still, despite getting into York, Bradley remains stressed – there have been complications confirming his acceptance and Lakeshore’s guidance councillor is helping him get the right documents to the right people in the right order. “I just want to go to this school; why are they making it so complicated?” he asks.

“What can I do to help?” asks Kirsten Souwand, an adult volunteer. 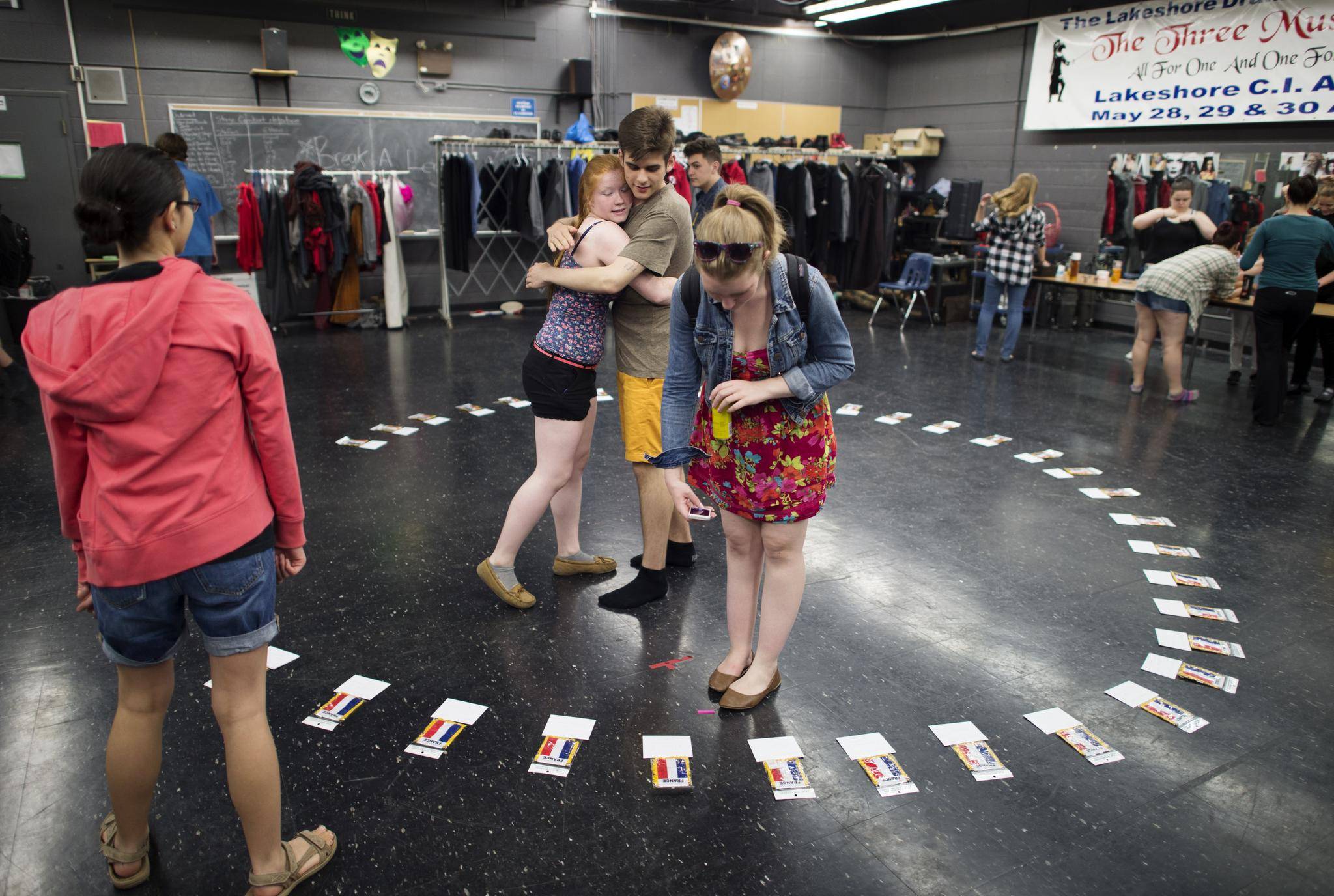 From left: Olivia Costes, Jaime Wells, Joey Gratkowski and Haley Jackson check out the gifts and notes Mr. Danakas left for each student on opening night.

Allan Easton, the patient and good-humoured new principal at Lakeshore, walks me through some of what is holding up Mr. Danakas’s production. The worry about the fog machine is that it will set off the smoke detectors. The detectors could be bypassed, but then staff would have to be paid to walk around and look for fires – $1,200 in overtime for three nights.

Painting the floor, meanwhile, could be a problem because it might impinge on the skilled trades. “I can’t ever be seen to be taking a union job away from anybody,” Easton explains.

Health and safety concerns also complicate Les Misérables. I remember climbing up on ladders to help hang and focus the lights in my high school auditorium, but Lakeshore’s 1950s-built catwalks are off-limits to all (teachers aren’t even supposed to get up on a ladder, so an adult volunteer did that work on borrowed scaffolding). “Even our caretakers have to have ladder training before they can use a ladder safely,” Easton says. “We’re a very litigious society now.”

As for budgeting, Mr. Danakas used to roughly estimate his ticket revenue, but now sales have to be carefully projected. “ ‘It should be fine,’ isn’t something I can go with any more,” Easton says, with a sympathetic shrug. “Accountability is huge – more than it was in the past. … Taxpayers’ money, right?”

In the end, Mr. Danakas is allowed to use the fog machine and – too late to actually do it – gets permission to paint the stage floor.

Before we head to opening night, a quick flashback to a moment I skipped: Right before dress rehearsals began, Mr. Danakas turned 50 – and his students surprised him by filling the drama studio with balloons in the morning.

But as Hilliary Lyn, the Grade 12 student who is playing Cosette, explained to me, it was all a ruse to distract from the real surprise. Hilliary, the drama executive, had sent out messages on Facebook to recent graduates of Lakeshore, who then contacted less recent alumni.

On May 13, while Hilliary distracted Mr. Danakas, a dozen of his former students filled the room, bringing along a book full of tributes from even more students dating back to 2004. “Surprise!” everyone shouted as he came in – and Mr. D’s eyes flooded with tears.

In the tributes submitted, he was described again and again as a “second dad” or “father figure.” That, he explains to me later, is his philosophy as a teacher – to care for students the way he does his own children. “My heart is just as open to them,” he told me. “That’s the problem with bureaucracy – it takes the heart out of things.” 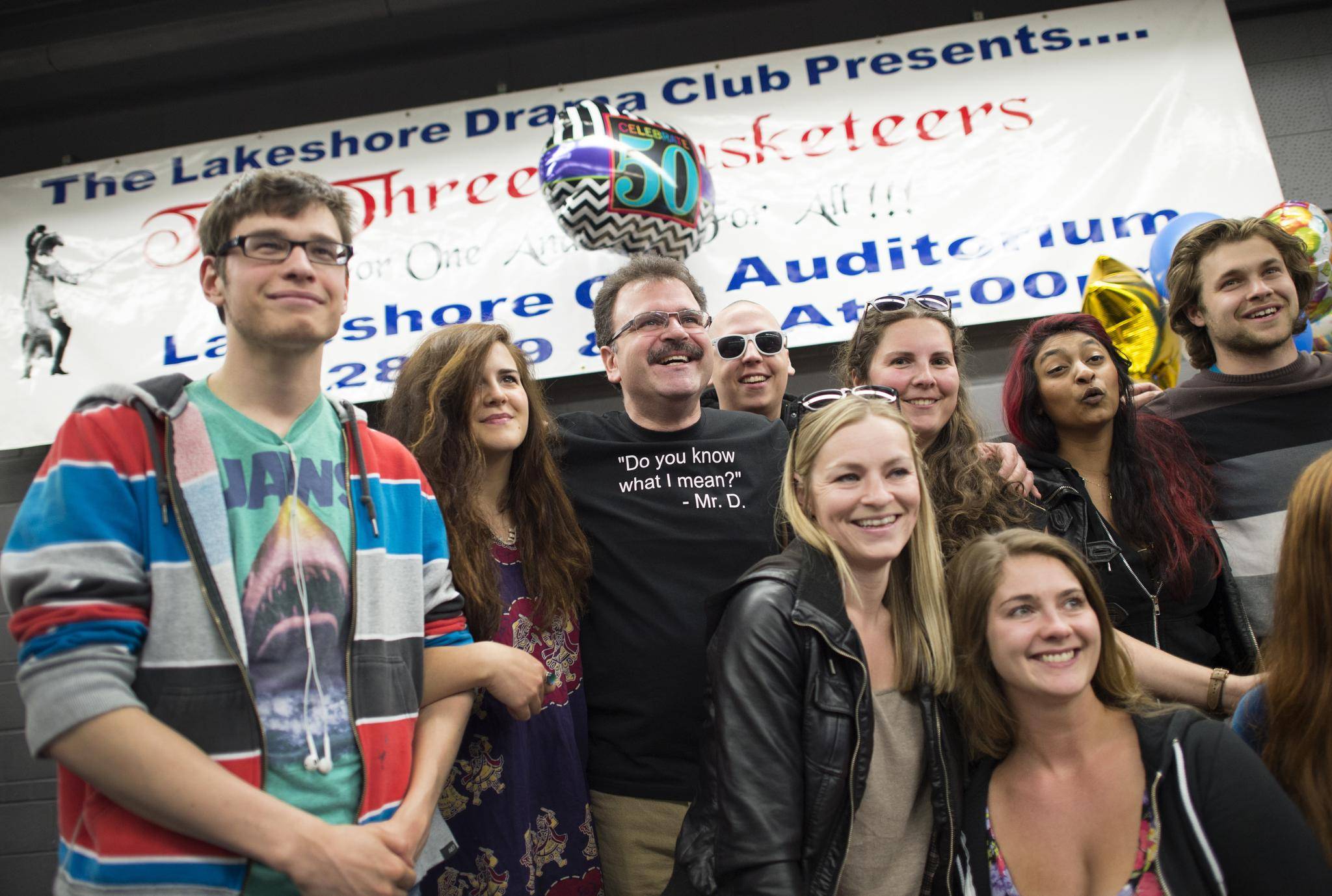 Mr. Danakas, centre, poses with past theatre students during his surprise 50th birthday party.
Follow J. Kelly Nestruck on Twitter @nestruck
Report an error Editorial code of conduct
Due to technical reasons, we have temporarily removed commenting from our articles. We hope to have this fixed soon. Thank you for your patience. If you are looking to give feedback on our new site, please send it along to feedback@globeandmail.com. If you want to write a letter to the editor, please forward to letters@globeandmail.com.
Comments