The Book of Mormon - the first of what will hopefully be a long line of stage musicals created by scabrous American satirists Trey Parker and Matt Stone - is a hit by any standard.

It heads into the Tony Awards Sunday night with a leading 14 nominations, the digital release of its cast recording has been selling strongly on iTunes and, in the place where it counts most, it's playing to 102-per-cent capacity on Broadway, which I assume means that a significant minority of lucky ticket holders are smuggling in friends in their pants.

There hasn't been a musical comedy on Broadway with this much buzz since The Producers, but The Book of Mormon's phenomenon is much more heartening for those who wish the great American art form to not only survive, but thrive.

Mel Brooks's 2001 smash, for all its entertainment value, merely brought the comedy in musical comedy up to what was cutting-edge in 1968, just as Monty Python's Spamalot would go on to recycle jokes from 1975 in 2005.

But The Book of Mormon brings the filthy, libertarian and still somehow heartwarming sense of humour of Parker's and Stone's TV series South Park to Broadway while it is still piping hot. Supplying the score is Avenue Q composer Robert Lopez, who goes beyond his pastiche work on that navel-gazing show and pens a few real earworms.

While The Producers and Spamalot showed their vintage through an excess of worn Jewish and Scandinavian gags, respectively, Parker and Stone set their satiric sights on harder targets: Mormons and Africans.

Taking a cue from the au courant Judd Apatow school of comedy, The Book of Mormon is a primarily an odd-couple bromance between two newly minted graduates of Salt Lake City's Missionary Training Center: Elder Price (a superbly slick Andrew Rannells), clean-cut and unbearably self-centred, and Elder Cunningham (a consistently hilarious Josh Gad), a socially awkward pop-culture nerd who is overweight and underloved.

Despite Price's prayers that they be sent to the mission in Orlando - "Sea World and Disney and putt-putt golfing!" he sings - the pair ends up sent to Uganda, where they are quickly given a crash course in the realities of poverty, AIDS and violence. A warlord (Brian Tyree Henry) is terrorizing the village where they are stationed and has issued an ultimatum that the local woman be circumcised within a week.

"Africa is nothing like the Lion King!" Elder Cunningham says after witnessing the unceremonious murder of a villager. "I think that movie took a lot of artistic licence."

The arrows aimed at organized religion strike surest in The Book of Mormon. In the most biting song, Turn It Off, the Mormon missionaries cheerily celebrate their suppression of emotions and critical thinking: "When you're feeling certain feelings that just don't seem right; treat those pesky feelings like a reading light." Here, choreographer and co-director Casey Nicholaw ( The Drowsy Chaperone) scores his biggest laughs with a tap-dance routine that manages to both reference A Chorus Line and the classic late-night TV commercial for the Clapper.

But while the main plot points involve Elder Price losing his religion and ego, and Elder Cunningham's creative adaptation of Mormon scripture to empower the Ugandans, The Book of Mormon ultimately ends with an agnostic appreciation of religion and the missionary impulse. Its message is similar to that of Parker's and Stone's big-screen, war-on-terror, puppet satire Team America: World Police: The road to hell may be paved with good intentions, but that's better than ceding control to those with bad intentions.

What the creative team never quite nails is how invested the audience should be in the plight of the Ugandan villagers. Local love interest Nabulungi (played winningly by Stratford Shakespeare Festival alumna Nikki M. James) tugs at the heartstrings when she sings about a magical land of no suffering called Sal Tlay Ka Siti (sound it out), but a running gag where she "texts" on an old typewriter underestimates her intelligence and falls flat. Similarly, the threat of violence is sometimes treated seriously and at others like the musical is a Warner Bros. cartoon.

To truly enjoy The Book of Mormon, an audience must ultimately - like the songs instructs - turn any pesky feelings of identification with the characters on and off like a switch.

Notes on the Tony Award nominees

The Scottsboro Boys: With a second-place 12 Tony nominations, the final collaboration between composer John Kander and the late lyricist Fred Ebb of Cabaret and Chicago fame is the only new musical that might steal The Book of Mormon's thunder on Sunday. One of the great head-scratching mysteries of the Broadway season is why Kander and Ebb's earnest, minstrelsy-mocking musical about a famous civil rights case was hit by protests, while Parker and Stone's provocative gags about genital mutilation in Uganda and the tenets of Mormonism got a free pass.

Anything Goes: In third place nomination-wise, the Roundabout Theatre Company's revival of Cole Porter's 1934 musical is up for nine. Aside from the magnetic star turn by Sutton Foster as Reno Sweeney and very funny supporting work from Godley, though, I can't quite figure out why it has been so widely acclaimed. Director and choreographer Kathleen Marshall's production never feels like more than a cabaret act and her dance numbers have the life squeezed out of them by Derek McLane's too-constrictive set.

The Motherf*cker With the Hat: The profane title of this new play by Stephen Adly Guirgis will have the broadcast censor on the edge of their seat during the Tony telecast. Too bad, it doesn't have the same effect on audiences. After the sweeping imagination exhibited in The Last Days of Judas Iscariot, Guirgis's bleak comedy about love and addiction - up for six Tony Awards - is entirely too earthbound. Maybe with a more versatile actor than Chris Rock in the crucial role of a double-crossing AA sponsor, it might make more sense.

Jerusalem and Arcadia: Tony nominees Mark Rylance (best actor) and Billy Crudup (best featured actor) show how and how not to steal scenes in these two dramas. If you think the days of the great stage performances are over, you simply must see Rylance roar as Rooster Byron in British playwright Jez Butterworth's curious but hypnotic play, Jerusalem, about an ex-daredevil drug dealer living a Pied Piper-like existence in a city wood. But Rylance is also generous to a fault with fellow performers like Mackenzie Crook and lets them shine with or without him. Two blocks away, in Tom Stoppard's Arcadia, Crudup gives a quirky performance as a self-centred academic in which he largely ignores the rest of the actors around him. His ego upstages the play in David Leveaux's generally uneven revival, and I hope Crook or Hat's Yul Vázquez triumphs over him. 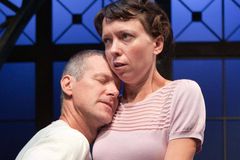 The Railway Children and realism: Choo-choo on this
May 10, 2011
Follow J. Kelly Nestruck on Twitter @nestruck
Report an error Editorial code of conduct
Due to technical reasons, we have temporarily removed commenting from our articles. We hope to have this fixed soon. Thank you for your patience. If you are looking to give feedback on our new site, please send it along to feedback@globeandmail.com. If you want to write a letter to the editor, please forward to letters@globeandmail.com.
Comments