'Love a woman, not a country. … It'll only hurt your heart to love a country."

This is perhaps not the message you'd expect to begin Canada's 150th birthday celebrations at one of our foremost national institutions.

And yet, these are the words of advice that repeatedly echo in the ears of Joey Smallwood on his long and strange journey from socialist to Liberal to the first premier of Newfoundland and the final founding father of Canada – in Robert Chafe's sweeping new stage adaptation of fellow Islander Wayne Johnston's award-winning, best-selling 1998 novel The Colony of Unrequited Dreams.

Director Jillian Keiley's production kicks off a year of sesquicentennial programming at the National Arts Centre – which will culminate in July – and thoughtfully re-examines both an important period of our history and a great Canadian book.

If you were worried that the flurry of funding for arts projects tied to Canada's 150th might result in hollowly nationalistic works, solipsistic arts projects as slithery and pompous as that word "sesquicentennial" itself, The Colony of Unrequited Dreams should lift your spirits and whet your appetite. This three-act, 10-actor production from Newfoundland's Artistic Fraud company – which will tour to Halifax's Neptune Theatre and the Grand Theatre in London, Ont., next – is the type of meaty yet moving work about this country that audiences should be hungry for this year.

The dictum to not love a country comes from Smallwood's alcoholic, tragicomic father Charlie (Steve O'Connell) – and it's unclear if it is good or bad advice. In the time-honoured tradition of sons angry at their fathers, the younger Smallwood (a brilliantly anti-heroic Colin Furlong) ties himself up into knots for the rest of his life turning the words over in his head.

In the end, he does love a woman and he does love a country – but, in both cases, convinces himself that it is neither practical nor pragmatic to pursue the passion.

While the person and the politics in Johnston's book adapted by Chafe are real, the short Smallwood's repressed feelings for a tall woman who is not his wife, around which much of the plot centres, is entirely fiction.

Sheilagh Fielding is a memorable character on the page, a limping, alcoholic columnist who, in public, is Smallwood's antagonist from Bishop Feild prep school to his time in politics. She's equally so on the stage – incarnated lusciously by Stratford Festival veteran Carmen Grant.

Chafe's adaptation zeroes in even more clearly on the adult years of this almost-romance – unsentimentally chopping off the first half of Johnston's 562-page novel that deals with Smallwood's formative years and his time in exile working for a socialist newspaper in New York.

We meet Smallwood already a compromiser, angling to be a part of a corrupt party in 1927, pretending to not want power for himself while he does so. Given the period we start in, his relationship with Fielding has an appealingly screwball-comedy quality, reminiscent of His Girl Friday.

These two bigmouths face off most memorably in the second act when Smallwood's broadcasts of his nationalistic radio show are set off against Fielding's cynical newspaper columns refuting them. Keiley directs what could be a static scene as a dance – the two rolling their desks around each other in circles, flirting and fighting from behind microphone and typewriter amid falling snow.

That snow is the central stage image for the production, which Keiley bookends poignantly with the appearance of crossing sweepers – the squeegee punks of St. John's of the early 20th century, broom-wielding boys who would clear snow off the road in front of well-dressed pedestrians for a penny, sweeping rich townies across intersections "like curling stones," as Johnston writes in his novel.

In between, Chafe's play coherently romps through a flurry of complicated Newfoundland history – from the return to power of the Liberals to the storming of the Colonial Building in the Depression, through the years the Dominion of Newfoundland was governed by Britain and the non-elected Commission of Government, to the 1948 referendums in which Newfoundlanders narrowly voted to join Canada as a province rather than regain their independence.

That the unelected British commissioner Sir John Hope Simpson, whom Smallwood gets into a fight with, and Canadian William Lyon Mackenzie King, whom he allies with, are played by the same actor (the versatile Charlie Tomlinson) is perhaps a signal to how the creators view the politician's evolution on the way to Confederation.

With the last chapters (and many characters) removed and dramatic twists simplified from the novel, everything now comes to a head on the night of the first referendum in 1948 – where it became clear that a second run-off referendum between independence and Canada would be needed.

Chafe's play could have used more long, multicharacter scenes such as the epic one he wrote here – with Smallwood and his family airing all their dirty laundry while Smallwood Sr. wails: "OLD LOST LAND."

The cast of 10 is not always used to its full potential like this – and the sparsely furnished stage can feel quite empty at times.

Indeed, Chafe's play does not completely avoid the pitfalls of adaptation. The first act is weighed down by exposition, jumping, as it does, into the middle of Johnston's story and needing to fill in complicated backstories.

A figure such as Daniel Prowse, another childhood frenemy of Smallwood and Fielding's, never fully comes into focus in either Chafe's script or Brian Marler's performance.

The cinematic feel of stretches is underscored, literally, by Patrick Boyle's recorded jazz compositions (no jigs or reels here).

This is a production that feels big in some ways, but somehow still little in others – though perhaps that's in keeping with Smallwood's famous formulation that Newfoundland was a "great small" nation.

In the end, The Colony of Unrequited Dreams feels like that – a great small work of art.

The Colony of Unrequited Dreams continues in Ottawa at the NAC until Feb. 11 (nac-cna.ca). For information on other tour dates and venues, see artisticfraud.com. 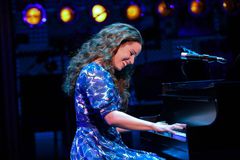 Review
Diane Flacks’s Unholy and Kate Hennig’s The Last Wife, reviewed
January 27, 2017
Follow J. Kelly Nestruck on Twitter @nestruck
Report an error Editorial code of conduct
Due to technical reasons, we have temporarily removed commenting from our articles. We hope to have this fixed soon. Thank you for your patience. If you are looking to give feedback on our new site, please send it along to feedback@globeandmail.com. If you want to write a letter to the editor, please forward to letters@globeandmail.com.
Comments