This is what the Phantom has brought with him across the Atlantic Ocean: the life-size mannequin of his lost love, Christine Daae; the cunning white mask that covers his disfigurement; his magnificent pipes; and his rage. Oh, yes. The Phantom may have moved to America, but he hasn't traded his gothic obsession for a golden retriever and a pair of slippers.

Near the beginning of Love Never Dies, Andrew Lloyd Webber's new sequel to Phantom of the Opera, the Phantom, high in his crazy-villain lair above Coney Island, stands in front of his Christine doll and sings a great belter of a song called Till I Hear You Sing Once More. It's a temple-crumbler, and the audience at a preview at the Adelphi Theatre this week received it with great appreciation.

They could not know that Ramin Karimloo, the young Canadian actor originating the role of the Phantom in this show, once brought equal passion to singing in a Tragically Hip cover band, or that his obsessions extend to hockey, not opera ingenues, or that, unlike the Phantom he has never been driven to murder, but does like driving a motorcycle. He doesn't hate the world, but does loathe buffets. So no real resemblance to the Phantom, then, except for those pipes. Here is proof of Laurence Olivier's wise observation: "It's called acting, dear boy."'

Next month, when Love Never Dies officially opens in London, the beady eyes of every critic and musical-theatre aficionado will be trained on Karimloo and his co-star, Sierra Boggess. After all, Phantom of the Opera was not merely a musical but - in the producers' words - "the most successful single piece of entertainment of all time." In certain quarters, the knives are already drawn; in others, the Kleenex boxes are being stockpiled. It's a heavy weight to carry for a 31-year-old with no formal vocal training, who is vague about whether he actually graduated from high school, who paid his dues singing on a cruise ship and whose main dream, at one point, was to meet the Hip's Gord Downie.

"I'm very calm, actually," says Karimloo. "When I was onstage for the first time in the mask and the makeup, I wasn't nervous. My stomach wasn't flipping, I wasn't worried about opening. I was thinking, 'I can't wait for people to see this. I'm ready.'"

The sense of calm is a recent acquisition. Last fall, Lloyd Webber announced the new musical to a packed theatre in London, as the Phantom of the Opera's bona fides were trotted out like poodles at a dog show: longest-running musical on Broadway, 40 million albums sold, productions in 49 cities, 50 theatre awards. Afterward, Karimloo came out onstage to perform Till I Hear You Sing Once More for the first time in public - and in front of jackal-eyed reporters, no less. "That's the hardest song I've ever had to do," he says, shaking his head. "I couldn't sleep the night before.''

At the same event, Love Never Dies' veteran director, Jack O'Brien, talked about the difficulty of casting: "Finding the actors to do this was not easy. These are daunting roles, and vocally punishing."

As it turned out, the producers had to go to America to find Boggess, their Christine, but the Phantom - as is his wont - was hiding right under their noses. Karimloo was playing the title role in the Phantom of the Opera onstage in the London production in 2008 when, one day, he noticed a series of missed calls from his agent on his phone. "Where are you?" the agent shrieked. "Andrew wants to see you at four." It was 2:30; Karimloo joked that he'd try to make it. He didn't need to ask who Andrew was.

It was no secret that Lloyd Webber had long been tinkering with a sequel to the Phantom, which opened in London in 1986. That musical, based on the 1911 novel by Gaston Leroux, follows a tormented musical genius who lives in the Paris Opera as he pines after a young singer, murders a couple of annoying people and causes a large light fixture to plummet to the floor. It ends with the Phantom broken and alone.

For the sequel, Lloyd Webber first worked with novelist Frederick Forsyth on a version that had the Phantom moving to Manhattan, but he abandoned that. Later, lyricists Ben Elton and Glenn Slater stepped in. On the afternoon when Karimloo was summoned, he had no idea what he'd be singing for Lloyd Webber. He got to the office, and because he doesn't read music, had someone sing him the part - one of the new songs, which he then performed for the composer. Lloyd Webber listened intently and said, "That's how it should be done.''

It was not a fait accompli. Karimloo sang the new songs at workshops, at Lloyd Webber's house - all while performing eight shows of the original Phantom every week - and still didn't know if he had the part. He wondered if they'd cast an unknown for the biggest new role in musical theatre. "Deep down I kept thinking, they've at least got to entertain getting a big name for the Phantom."

Then the call came; he had the part. "That's when the nerves started," he says with a laugh. He soon began recording the cast album in London, while performing at night and trying to make time for his wife and two young sons.

Karimloo, whose family moved to Canada from Iran when he was two years old, is trim, handsome, exceedingly polite even by Canadian standards, constantly fretting about "tooting my own horn." He's a success story for the American Idol generation: With no vocal training except what he'd learned from rock 'n' roll, he arrived in London, found an agent and began a steady climb from understudy to leading man.

In looks and temperament he's less Phantom, more Raoul - the romantic lead in the Phantom and its sequel, a captain-of-the-fencing-team type. (In fact, he was once cast as Raoul in the London production of Phantom, despite the reservations of producer Cameron Mackintosh.)

The new role brings Karimloo full circle: He only became interested in musical theatre after being dragged, with a teenager's sullenness, to a production of Phantom of the Opera at the old Pantages Theatre in Toronto. It was a revelation. Here was a way to sing like a rock star, and act, and get chicks. Had he never been interested in musical theatre before? He shoots an incredulous look. How many boys love musicals? "Um … no."

This lifelong devotion to Phantom puts him in a vast company of people, many of whom have seen the musical onstage or on film, and own the CD (and possibly the T-shirt and pillow as well.) A vocal minority of those people have already loudly protested against Love Never Dies, prior to its opening on March 9 (see, for example, the Facebook group Love Should Die). As O'Brien, the director, said at the launch, "No one is going to thank us for doing this. We're playing around with aspects of people's memories that are sacrosanct. We'd better know what we're doing."

Already, the road has been bumpy. There's been talk of insufficient preparation time for such a complex production. The initial performances were postponed, and when the first preview finally opened this week, a technical glitch delayed the performance. As well, Lloyd Webber suffered health problems, announcing last fall that he had been treated for prostate cancer.

For almost 20 years, on and off, the composer's been working on a sequel, ever since Maria Bjornson, Phantom's designer, had told him she disliked the ending. That ending - with the murderous Phantom sobbing as his true love Christine leaves with drippy Raoul - plagued many of the creative team. "She goes off with the cute guy," says O'Brien, ""But isn't the real story between the Phantom and Christine? That's where the knife goes in. We never find out why he's so unpleasant."

Well, if you ask Karimloo, the Phantom's not unpleasant, just misunderstood - for a clinical reason. The actor likes to come up with a backstory for his characters, and he decided that the explanation for the Phantom's behaviour - his brilliance and social awkwardness, his obsession, his inability to fit in with the world - stemmed from Asperger's syndrome, a form of high-functioning autism. When he announced this publicly, he received both letters of support from people with Asperger's, and howls of outrage.

"There was a bit of backlash about that," Karimloo says. "But I thought, why? I'm not saying he's a killer because he has Asperger's. … It humanizes him. That, married with the fact that he's deformed, was why he was hounded. But the darkness doesn't come from Asperger's, his genius and his beauty does."

In the new production, the Phantom is still a genius, but he's a little more at home in the world, because he's chosen to live among the freaks of Coney Island. No lighting fixtures were harmed in the making of the show, but something impressive does drop from the ceiling. And because it's set at the seaside, and not in a subterranean lair, the Phantom gets his moment in the sun. 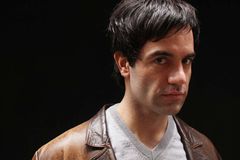