Cara Gee doesn't even have to say a word to get what she wants. Walking into her favourite pub on Dundas West in Toronto, the 29-year-old actress simply twirls her finger at the bartender and tequila shots materialize. I balk, but only briefly, before joining her at the bar.

"I work really hard – and I work as hard as I play," Gee says by way of explanation, before suddenly bursting into a peal of wicked laughter at how that sentence sounds. "Oh my God."

Over the past few years, Gee has indeed become one of the hardest-working actors in Toronto theatre – as well as one of the livelier presences at opening-night parties and award shows.

She held her own opposite heavyweights Megan Follows and Kelli Fox in Nightwood Theatre's hit production of Margaret Atwood's The Penelopiad, and was a stand-out in Factory Theatre's colour-blind production of Tomson Highway's The Rez Sisters. She also just recently shot her first lead role in a feature film – Defendor director's Peter Stebbings's upcoming aboriginal family drama, Running Wolf.

With Arigato, Tokyo, however, the Calgary-born, Ontario-raised actress has hit what is a significant milestone in any young performer's career – it will be the first show, after a couple of years of nearly non-stop work, that her parents won't be coming to town to see.

Live theatre gets a special power from what I like to call its creative friction – the rubbing up of actor against character, reality again representation. Gee, who oscillates between perfectly poised answers and downright mischievous ones over the course of an interview that began over mac and cheese but turns into a pub crawl, has an ideal bifurcated presence for the medium.

Gee has showed her G-rated side to the press before – emphasizing her love of yoga and reading and talking about the "pretty dress" she would buy if Running Wolf gets into the Berlin International Film Festival. But then there's the anarchic, WWE-loving prankster that actor Tony Nappo, who co-starred with her in Michel Tremblay's The Real World? at Tarragon Theatre, calls "Tequila Gee." ("I have about 120 pounds on her and she can drink me into a feeble puddle of tears," he says in a Facebook message.)

Brendan Healy, the thoughtful director who is helming the premiere of Arigato, Tokyo, describes his lead actress as being full of contradictions – praising her "understated intensity" and "haunting beauty." He sums her up this way: "She can inhabit the space between things."

Gee's in-betweenness does indeed make her fascinating to watch as a performer and a person. On the surface, of course, there's her mixed background – her mother is Ojibwa, while her father is white.

But there's a deeper, creative friction in her personality: Growing up near Bobcaygeon, Ont., and then in Newmarket, north of Toronto, she was placed in gifted programs, won public-speaking awards and sat on student council – but also produced punk concerts and ended up switching schools after an incident where she smuggled pot and pals into a dance.

Nushi, who she describes as the most complex character she's ever played, will give her a chance to tap into these different parts of herself. As research, Gee recently watched the 2005 film Memoirs of a Geisha in one window on her laptop and the Beyoncé documentary Life Is But a Dream in another. Flipping back and forth between the two, she came to feel that in Nushi, MacIvor has written a woman who combines a geisha's composure with the fierceness, boldness and religious intensity of Beyoncé – plus "a punk-rock heart."

It's a welcome change for Gee. On a pad where I have written down the last dozen or so shows she's played in Toronto, she gets me to place an asterisk next to each show where she played a character who was sexually assaulted. The Penelopiad. "Rape victim." The Rez Sisters. "Rape victim." Two SummerWorks shows – including Cliff Cardinal's Stitch, which landed her the festival's top acting award and an agent. "Rape victim, rape victim."

Gee, who as a member of the off-beat indie ensemble Birdtown and Swanville has also got to play wrestlers and dictators, says she understands why playwrights want to tackle the important subject of rape, but also finds it a bit "bonkers" how often these roles come up. "I've got it down," she says. "Spotlight on you; walk downstage; rape monologue."

Theatre is supposed to be a space with more opportunities for women than film or television – but sometimes it just has its own slots to fill. "It's a bit of a trope for native women," Healy says, when I mention all the rape victims Gee has played. "It's a trope that you see so often for young, beautiful women on stage who aren't blond."

Well, one thinks after the next tequila shot arrives, what playwright could invent a character like Cara Gee? 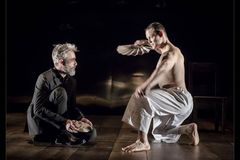 The Real World?: One tortured family, two parallel universes
May 3, 2012 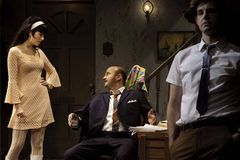 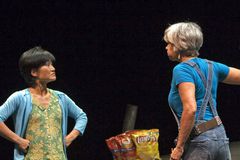