Kyle Abraham has a knack for playing against our expectations. A hip-hop segment hits maximum bass as his dancers' arms become their most graceful, while a sequence of crackling, stop-and-go static sends his ensemble into a buttery phrase of motion. Contrast is at the heart of Abraham's 2012 The Radio Show, which makes sense; it's a dance work about disappearances – both of the stuff we listen to and the language inside our heads.

The Radio Show has returned to Toronto's World Stage festival after a stopover in 2014. Since then, Abraham (a 2013 winner of a MacArthur Fellowship, the so-called "genius" grant) has continued to distinguish himself among the new guard of choreographers in the United States. His New York-based company, Abraham.In.Motion, is known for a sort of stylistic irreducibility, melding the big names of mid- and late-20th-century modern dance (Graham, Limon, Cunningham) with a contemporary vernacular influenced by hip hop, the club scene and street aesthetics. Lately, Abraham's work has delved increasingly into the politics of class and race. His Untitled America, which was made for Alvin Ailey American Dance Theater and premiered in 2016, looks at the way the U.S.'s prison system has impacted African-American families.

There's a quality to The Radio Show that makes it feel like the unfolding of a dream, with a strip of floor lights that shine to blinding intensity, voiceovers that serve both narrative and ambient ends, and moments of poetic onstage stillness. The website notes tell us the work is about the disappearance of two key black-community stations from the radio waves of Pittsburgh (Abraham's hometown) in 2009, coupled with the deterioration of his father's health from Alzheimer's and aphasia. We get clips of eclectic music – Motown, hip hop, soul, Beyoncé – and vignettes that alternate between telling little stories (a memorable one involves dancer Marcella Lewis primping self-consciously at a hair salon) and stretches of raw expressivity.

The recurring motif is one of stunted communication, and some of the best dancing – and there's lots of good dancing here – comes from the tension between the will and inability to express. The work opens with a solo by the charismatic Jeremy (Jae) Neal, who ends an involving sequence of jazzy, hip-twisting choreography with a twitchy collapse into himself, and a subsequent stagger offstage. Connie Shiau and Tamisha Guy stand out for their intense physical generosity, taking every movement to its stretchy, musical extreme. They perform a duet that makes use of elegant floor work and gives the striking illusion of the two women floating, side-by-side, an inch above the stage. Shiau is the kind of dancer who seems naturally disposed to make her audience feel – we experience this in a solo that sees her devour space with energy, then accent it with expressions of restraint and frustration via choppy hands and arms. We get effusion and restriction in a beautiful montage.

Abraham relies a lot on small ensembles working in synchronized unison. It's a choreographic device that's easy on the eyes and, when used sparingly, can serve as a visual reprieve from busier configurations. Problem is, he uses it too much, and the repetition deadens the effect. Instead, our focus goes to the parts of the piece that feel more idiosyncratic, like when Shiau and Lewis riff on the sexual, heteronormative tropes of hip-hop winding, shimmying and shaking, a playful sequence that tilts toward parody.

There's also the sense that some of the radio voiceovers are a bit throwaway. A mock call-in show has a few audience members singled out to speak to a DJ; the sequence hits a dead end with no further development. Similarly, there are stretches of background radio talk where intriguing conversations about gender and responsibility don't turn into much at all. In the same breath, some of this ambiguity makes for an intriguing, cumulative effect – I'm thinking in particular of a moment when the women step forward, glaring defiantly, while a voiceover about appropriate female clothing is still fresh in our minds. Ideas form and linger; like in a dream, they might not necessarily cohere, but their expression is still affecting. 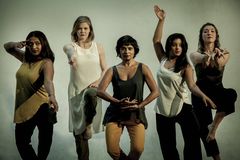