If you share a stage with Jonathon Young, tour de force and co-founder of Vancouver's Electric Company Theatre, you might come to regret it – for all the right reasons.

"Watching Jonathon Young on stage is compulsive. You can't help it – it's all you want to look at," says one of his collaborators and a huge admirer, actor/director Meg Roe. "It's awful being in plays with him."

He and Roe first shared a stage in 2003 at the Vancouver Playhouse Theatre Company, in Romeo and Juliet. He has made life similarly awful for fellow actors in Vancouver productions of Trout Stanley, Tear the Curtain!, Intimate Apparel, Doubt and All the Way Home (with Roe again).

Now, the big one: This summer at Bard on the Beach, Vancouver's Shakespeare festival, Young takes on Hamlet, directed by his longtime collaborator in art and life, Siminovitch Prize-winner Kim Collier. To say expectations are high is putting it mildly: Theatre types here have been buzzing about it for months.

The Electric Company has pushed the envelope with mind-blowing originality and technological innovation in works such as Studies in Motion and No Exit. What would Collier and Young do with Hamlet? Give him a smartphone and an iPad. Young's Hamlet will live out his torment and angst in contemporary Denmark, with instant access to news feeds and a playlist.

He's spent the better part of a year preparing for the role, in collaboration with Collier. "The anxiety of failing is certainly present," he says. "But because I'm not a Shakespeare nerd … I am coming to the play as fresh as one can."

Failure is not the word that comes to mind when people think of Young. Fearless, yes. "I can't really think of a show in which Jonathon himself let me down as an actor," says UBC theatre professor and critic Jerry Wasserman, who has seen Young in at least 15 productions. "He makes it look effortless."

It's no wonder Young is so good on stage, when you consider the thoughtfulness with which he approaches just about any task. In a wide-ranging interview, he was contemplative about what many would consider the role of a lifetime.

"There's such a profound selfishness, such a useful selfishness to Hamlet. He takes up so much of the three hours of the play, unpacking his own conscience, examining it. … He's so astonishingly central to the whole drama, and his conscience is so central to the whole drama. We're trying to get inside it and he's trying to get inside it. And I suppose that's why we've been so drawn to him over the past several hundred years."

Young, who turned 40 last month, was born in Richmond Hill, Ont., and moved as a young child to Vernon, B.C., where he grew up. He met Collier at Studio 58, the highly regarded theatre school at Vancouver's Langara College. They formed the Electric Company with Kevin Kerr and David Hudgins in 1996, and became darlings of Canadian indie theatre.

"On top of being such a genius performer and an amazing artistic thinker, he's a really great guy," Roe says of Young.

Roe compares Young to Fred Astaire. "The way he moves, he's magnetic," she says. "It's like he's dancing all the time, but you never see it. You feel like it's so fluid and gorgeous and organic that you never disbelieve it but it's always this incredibly thoughtful efficient economic way of moving. And I think that's one of his amazing things; the way he uses this body and his natural charms and his courage."

Young has stretched his acting muscle in a variety of roles, most recently, just before Bard, in the Canadian Stage production of Melissa James Gibson's This in Toronto.

"Jonathon is a virtuosic actor," says Canadian Stage artistic and general director Matthew Jocelyn, who originally hired Young just to read with the actors auditioning for the central female role. "He was just so pleasant to be with and so inventive, and so attentive to each one of the partners and where they were going. … It became slowly inevitable that I wasn't going to audition anybody for that role, that he was the guy," Jocelyn says.

And now, the weight of the melancholy prince. Approaching opening night at Bard, the exhaustion and heavy sadness Young says he felt after the first read-through in April – knowing what was ahead – have transformed to "a kind of elation, even joy," he says.

Young and Collier have a long list of shared artistic accomplishments and are revered by the theatre community in Vancouver, where they lived for years, and Toronto, where they're now based. They have also dealt with unspeakable tragedy, with the death of their daughter Azra, 14, in a fire four summers ago.

In a tortured role such as Hamlet, Young could not help but find parallels of suffering.

"When Hamlet says the 'time is out of joint,' for me that's a discovery of a kind of truth. It's not just a bit of word play. There's something wrong with the time. I recognized, in my own state of shock and aftermath after what happened to us, a profound sense that time had passed without me, or the change between your own personal inner state and the way the world is progressing is out of joint. For Hamlet, he's come back to this kingdom that he no longer recognizes, and the pieces have shifted and his whole future has been taken from him. And a new one has been put into place that he doesn't recognize. And that's the source of profound confusion and remorse and inability to get on aboard with it, or to play along in this new reality that he doesn't believe in or can't accept. But he recognizes that the only way forward is to play the part that he has been cast in."

It's a supremely difficult role on many levels, and yet Young will tackle it while also playing Feste in Bard's production of Twelfth Night.

Director Dennis Garnhum was initially reluctant to cast Young in the key role of the wise fool, given the amount of focus Young would need for Hamlet, and Young went back and forth on whether he felt he could do it. But both agree the Twelfth Night role has served as a kind of tonic, not a distraction. "I think he's made the production stronger than I'd originally envisioned it," says Garnhum.

Garnhum, who calls Young's work "totally original and stunning," is artistic director at Theatre Calgary, where this fall Young will play Nick in The Great Gatsby. Once again, he will be directed by Collier.

They no longer live under the same roof, as Young puts it, but their artistic collaborations are like no other. Their huge history and mutual trust are so important, he says, particularly in a "massive show" such as Hamlet. And when things begin to feel impossible, he always relies on her strength and energy to pull him through.

"Doing Hamlet with Kim, there's something about it that's about our lives and our story. It's been a very personal, rich, rewarding journey to do it together; to explore these words together," he says. "We have brought a lot of ourselves to it. And continue to."

Bard on the Beach updates Hamlet with iPhone
June 12, 2013 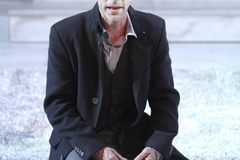 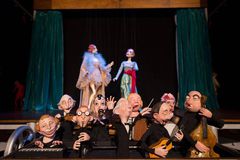 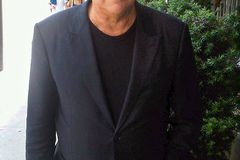