When writing a review, I avoid reading any other critic's response to the work in question – like most reviewers, I imagine. But after I've filed, I'm Googling like crazy. Were my impressions similar to those of my counterparts?

When it's theatre I'm reviewing, the first critic I seek out is Colin Thomas. Thomas has been a theatre reviewer at Vancouver's alt-weekly The Georgia Straight since I arrived in this city – and long before. He is a respected fixture, reviewing two to three shows a week with solid theatre knowledge, encyclopedic context, a sharp eye, fearless opinions – and fine writing to boot.

Thomas stunned the local arts community this week with a blog post: "I just got fired from The Georgia Straight. Thirty years. No warning. No compensation," it began.

I know Thomas a bit, just from running into him at performances. I know him much better as a reader. I consider him the best theatre reviewer in Vancouver.

In his post, Thomas detailed a meeting with two Straight editors – both of whom I also know (it's a small community) – in which he says he was told letting him go was not their decision; they had fought it. As for the reason, it was suggested there may have been a confluence of factors – financial difficulties, and he's not on staff, so his job is easier to cut – but also that there had been complaints from some companies. "You know: that you never like anything," Thomas wrote in his account of the conversation.

When I asked the editor of the Straight if it was accurate that Thomas was told of those complaints in that meeting, I did not receive a direct answer. In his reply, Charlie Smith did say that they were not cutting back their theatre coverage, which is great to hear; the Straight, which has another regular theatre reviewer, is the city's go-to source for local arts coverage. And Thomas, in a subsequent post, indicated that diversity would be a priority in selecting his replacement, which is also great.

Let's face it: These are tough times for arts journalism. If you'll forgive a brief navel-gaze, Globe readers – especially in Ontario – are lucky to have J. Kelly Nestruck. I wish I were able to review more theatre in the west; my schedule makes it challenging. So when you lose an important voice in these difficult times, it stings. I was bummed to read recently that the Calgary Theatre Critics' Awards have folded. "Sadly, we must take note that theatre criticism is struggling in Canada, especially here in Calgary," wrote one of the critic-organizers, Jenna Shummoogum, noting that there is only one theatre critic appearing in print in that city.

I don't know if Thomas's negative criticism was a factor in his dismissal. But I do think it's an issue. There is a serious need for smart, informed and, yes, sometimes critical theatre criticism. Vancouver has a thriving scene that mounts some tremendous work. There are also mediocre productions and some cheeseball audience-pleasers. I know this can be said of many cities. Thomas was critic enough to write what he really thought. That should be a given, right? It isn't always.

Reviews, I remind myself often, are for the readers. If people are going to spend money on tickets, they deserve criticism that helps them make good choices. They want honest reviews that reflect the critic's opinion, rather than concerns about pleasing an advertiser or even an acquaintance in the theatre community.

The last thing any theatre artist or company should want is a falsely positive review that sends people out to a show only to be disappointed. Because the unsatisfactory experience could make it easy to forego the theatre altogether the next time around and go for the cheaper, easier option of staying home with Netflix.

Writing honest, critical reviews can be tough in a tightly knit community. It takes integrity and guts when you know the people you are calling out will be buzzing around you in the lobby at some future intermission. Or perhaps calling your editor or publisher to complain.

Theatre types deserve and want decent criticism – constructive, informed, thoughtful; not puff pieces and five guaranteed stars (four at The Globe). After Thomas's news broke, his Facebook feed was filled with support, much of it from people who have been the target of his sharp pen.

A petition began circulating demanding his reinstatement, saying: "The theatre community needs a real critic, not a cheerleader." I could have written that line myself. We are not here to be promoters, advocates or boosters.

"I certainly never want to be cruel but I want to be helpful, and honesty is helpful," Thomas said to me Wednesday. He has asked himself whether he's too critical in his reviewing.

"It's a common charge against me and I certainly do consider it. And I think for the most part I've got a well-functioning alarm bell. Because it's easy to be a quipster and it's easy to be harsh and very readable, and readers love it," he said. "I have stepped over that line sometimes; I've made that mistake. But I'm confident I don't make it regularly, and I'm absolutely adamant that it's important to review work frankly."

He said since the news became public he has heard from all kinds of people in theatre who have told him that he's made them better artists. "What could possibly feel better than that?" asked Thomas, who plans to launch an online newsletter with his reviews. "In lots of ways, it's been a validation of my entire life's work." 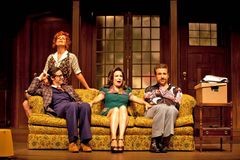