Midsummer Night's Dream: A Chamber Play, which opened at the Masonic Concert Hall on Thursday night, is the most daring version of a classic to be staged at the Stratford Festival in years.

Indeed, Peter Sellars's production busts many myths that have been built up around the plays of William Shakespeare and how they are best done – myths that Stratford, you would think, has an institutional interest in maintaining.

So this is great news, because any artistic organization that doesn't allow its shibboleths to be shaken from time to time will atrophy.

And it's even better news because this reduced and remixed A Midsummer Night's Dream is a breathtaking piece. It is fiercely intelligent, emotionally restorative, allows one Stratford Festival actor to do the best work of his career – and introduces another actor who could be the theatre company's next big star.

Here's what Sellars, the Los Angeles-based director, has done with Shakespeare's text: He's kept the dialogue of Dream in its usual order, but condensed it, stripped it of its narrative context, and dispersed it between four actors.

Dion Johnstone and Sarah Afful speak the lines usually allocated to Theseus and Hippolyta, the Duke of Athens and his conquered Amazon bride; teenagers Demetrius and Helena, former lovers lost in the woods; and Bottom, the weaver and amateur actor transformed into an ass, and Puck, the mysterious fairy messenger; and even Pyramus and Thisbe, the tragic lovers in the play within the play.

Meanwhile, Mike Nadajewski and Trish Lindström channel a variety of characters, primarily those of the fairy-world monarchs Oberon and Titania; the lovers Hermia and Lysander; and Moonshine and Wall (who turn out to have more – and more important – things to say than you might have thought).

On its most literal level, what this Dream's audience is presented with is a tale of two intertwined and overlapping pairs of lovers who are working out their identity crises and relationship issues in a claustrophobic chamber as part of some bizarre Shakespearean off-shoot of couple's therapy.

But Sellars' production is not just a Dream – it's a dream, and one that follows its own nocturnal logic. If you let it, A Midsummer Night's Dream: A Chamber Play does not flatten, but layer – creating a pleasing puzzle that allows audience members familiar with Shakespeare's text to at once watch a production of the comedy that plays out in their memory, and a brand-new story dramatized before their eyes.

It's a particularly exciting way to experience Shakespeare's language in a new way, and often really hear it for the first time. "I will roar you gently as any suckling dove," says Johnstone, sandwiched in between Afful and Lindström, turning one of Bottom's most ridiculous lines into one of the sexiest pick-up lines ever.

But this Dream's genius lies less in funny recontextualizations than in finding ways to repurpose lesser-known dialogue into deep revelations. Lindström, for instance, makes the humorous lines spoken by Wall in the play-within-the-play suddenly seem like hard-won wisdom of a mistress discarded. Afterward, you may struggle to remember exactly why a moment felt so resonant, but that is the nature of dream epiphanies: They are powerful, but fleeting.

As a bottomless Bottom, Johnstone – an actor I, in the past, have unfairly dismissed as merely solid – dominates the production, physically but also in the compelling psychological journey he maps. He's a man who contains multitudes – boys, warriors, men – and wants to be everything at once, but keeps trending toward the tragic figure of Pyramus against his will. His performance is a tour de force.

Afful, an actor in her third season at the Festival who has hitherto been in hidden away in choruses and as an understudy, delivers an equally stunning performance – wounded and revengeful, seductive and forgiving. She is absolutely ferocious as an unhinged Puck. "Up and down, up and down, I will lead them up and down!" she cries amid cacophony, and it terrifies. I can't wait to see what she does next.

It's no secret that many of the most-talked-about Shakespearean productions in recent years internationally have been site-specific or immersive. For this Dream, Stratford has built an entirely new space. Creating an unsettling atmosphere in the Masonic Concert Hall are the loud sound design by Tareke Ortiz, which rumbles so deeply it provides a free massage; the acid-trip lighting of James F. Ingalls; and an installation designed by Abigail DeVille that hangs chairs and doors off the ceiling amid a quilt of alien-repelling foil.

By far the biggest complaint I hear from audiences about Shakespeare – at Stratford or anywhere else – is that is difficult to hear actors. The fault is not with actors, though, but in our ears and our expectations. We have become used to electronic sound coming out of speakers – and is it simply harder to listen to acoustic voices these days. Meanwhile, movies and television have led us to expect a certain naturalism from actors in terms of expression that is at odds with the type of projection that is required to fill a big space. So actors are faced with a Catch-22: Be called a ham and be heard, or go for a subtlety of expression and be accused of being too quiet.

A Midsummer Night's Dream: A Chamber Play has the actors miked – and what an incredible opportunity it affords the actors to engage with Shakespeare's language. In fact, though I've seen a dozen productions of Dream before, this time whole new passages opened up for me in different ways simply because I could listen to them whispered rather than wailed.

This isn't for everyone, of course. But the truth is, neither is Stratford artistic director Antoni Cimolinio's King Lear starring Colm Feore. And so, Cimolino, above all, deserves credit more for creating a space for many different types of Shakespeare in his festival, showing that just because Stratford is a big institution doesn't mean it has to be bureaucratic and institutional. The company is feeling like an international mecca for Shakespeare again – with Cimolino directing King Lear in the "Stratford" style, Tim Carroll playing the game called "original practices" with his King John, and Chris Abraham finding new way to encourage playfulness among actors in his mainstage Dream.

I can't think of another theatre company in the world currently offering such variety stylistically – and all of it at the highest standard, too. 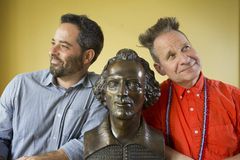 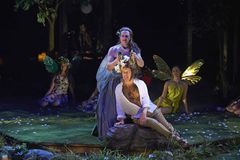 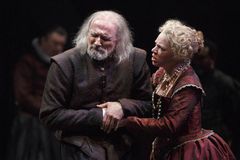