"This is no Spanish Inquisition." The year is 1606 and four men, their heads in black hoods and hands in shackles, are being questioned by a Magistrate and a Cardinal in a dark dungeon.

But the Magistrate's words are hardly calming. We may be in the Venetian Republic – a fairly secular part of the world and not under the power of the Pope – but the malicious smile on the face of Renier Zen (John Cleland), the magistrate in question, suggests that religious authorities don't have a monopoly on questionable interrogation tactics.

Primarily, A God in Need of Help is a really good yarn. Spun by playwright Sean Dixon, this is stage storytelling with a solid thrust to it, told with a sizable cast and complemented by equally sizable ideas – about the power of art and religion, and especially the combined power of the two. In the critical game called "what's the best new Canadian play in Toronto this season", I think it's taken the lead as we enter the final period.

The four men in the black hoods are soon revealed as Marco (Alden Adair), a slow-witted labourer; Cocco (Daniel Kash), a steely veteran of the Battle of Lepanto; Dolfin (Tony Nappo), a travelling actor; and Rafal (Jonathan Seinen), a mysterious young man with delusions that turn out to be equally dangerous to both religious and secular authority.

These four are, we are told, the strongest men in Venice – selected as such in a competition. But, as Marco says ruefully, at the end of said competition, they were given a task, rather than a prize.

Their mission: to transport The Feast of the Rose Garlands, a giant oil painting by Albrecht Durer of the Virgin Mary and baby Jesus surrounded by various anachronistic notables, from Venice to Prague at the behest of Holy Roman Emperor Rudolf II.

Wait, don't yawn: In 1606, moving a giant painting through the Alps was more dramatic than an episode of Shipping Wars. These men had to be strong not only to carry the heavy altarpiece (painted on poplar wood rather than canvas), but in case they are set upon by iconoclast Protestants along the way eager to destroy any work of art that might be considered a graven image.

Indeed, that is exactly what happened to these four in Pusterwald – but right before the inhabitants of that small Alpine village were about to destroy the painting and its carriers, a miracle happened: The Virgin Mary walked out of the painting.

It's this miracle that Cardinal Borromeo (Greg Ellwand) has been charged with investigating – though an equally intriguing mystery is the exact identity of the young Rafal, who might be a mountebank or a magician, or maybe, just maybe something more supernatural.

A God In Need of Help follows a familiar storytelling route – as one by one, each of the strong men, as well the captain charged with protecting them (Dmitry Chepovetsky), tells his version of what happened in the Alps. How can you stand listening to the same tale over and over, Cocco asks the Cardinal. "I'm accustomed to it," he replies. "It's the structure of the gospels."

How compelling each of these gospels is partially depends on the skill of the actor telling it. They vary here. Dixon's play comes urgently most to life when Chepovetsky's conflicted Captain is in charge (and in genuine peril). Nappo's charismatic Dolfin provides well-timed comic relief, while Kash is a thoughtful presence as Cocco. But the wiry, wild-eyed Seinen doesn't quite have the power as a performer to fully pull off the trick required at the end – to make us believe that Rafal's delusions (I won't reveal what they are) might actually be real.

There are two pages of "historical reference points" for any audience member in need of help of remembering exactly what happened during the Battle of Lepanto or distinguishing between the Calvinists and the Lutherans – but you'll get the gist fine on your own.

Richard Rose's staging aims for simplicity – taking place on a bare stage, plus a long thrust that leads out to the Cardinal's chair situated in the audience. Camellia Koo's main set piece is a giant, empty picture frame that the strongmen lug around in lieu of the painting itself. It becomes a useful door between the past the witnesses are narrating and the present-tense inquisition, a literal frame around the art of live storytelling – that is, theatre. Durer's painting appears too – skillfully forged in full size. It stands propped up against the back wall for the entire show and, if you stare at it long enough, you might just see the Virgin emerge from it too, like a 10th cast member. This is due to Kimberly Purtell's lighting – which I feel justified, for once, in describing as miraculous. 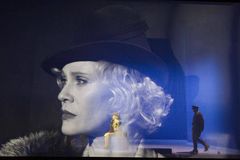 Theatre Review
Killer Joe: One of the most intense evenings I can recall experiencing at the theatre
April 22, 2014 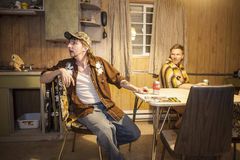