Jekyll & Hyde, composer Frank Wildhorn's 1997 musical based on the novella by Robert Louis Stevenson, is a show that has always left critics of two minds.

While I never saw that version, I do recall David Hasselhoff making the talk-show rounds when he played the title characters. You can go on YouTube to watch his widely (and perhaps unfairly) mocked performance of a song called The Confrontation, in which Dr. Jekyll and Mr. Hyde face off as the Baywatch star flips his hair back and forth under lighting changes.

In the post-grunge and steampunk-influenced rethink currently in Toronto (it's touring North America with ambitions to land back on Broadway in April), director Jeff Calhoun – who currently has a hit in New York with Newsies – has pushed this climactic scene into the realm of heavy-metal video iconography.

Mostly, Constantine Maroulis, an actor and singer who boosted his profile singing Nickelback songs on American Idol, transforms from the earnest Jekyll to the demonic Hyde by undoing his ponytail and then throwing his hair over his face like he's the evil girl from The Ring.

As he sings The Confrontation, however, he keeps his hair elastic on and pop battles with a cartoonish video of himself as Hyde, projected into the picture frame above his fireplace.

While Jekyll sings in an overly earnest style that I associate with everyone who's ever played Marius in Les Misérables, the projected Hyde disgorges his part sounding like Rob Zombie after a night of chain-smoking, his lips almost but not quite matching up with the recorded cringe-worthy lyrics: "Do you think I'd ever set you free? If you do, I'm sad to say, it simply isn't so."

Soon enough, Hyde bursts from the picture frame and projected flames engulf the room. This is all very ridiculous and very loud and there were a few giggles around me. But it was kind of fun, too, in a way that I imagine would particularly please teenage boys.

Angsty male prisoners of puberty seem to be the target market for this production, which also stars the Canadian R&B vocalist Deborah Cox. She plays Lucie, a prostitute with a heart of platinum who Jekyll meets at his bachelor party and Hyde, it seems, rapes in one scene then hires for what is supposed to be an audience-titillating bondage session in the next. They engage in a kind of ersatz S&M that I suspect even fans of Fifty Shades of Grey would be bored by.

With that smooth, soulful voice familiar from her 1990s hits, Cox manages to cut through the muck by making even the most awkward of Leslie Bricusse's lyrics seem heartfelt. "Sadly I'm not wise," she sings, not entirely shaking the body language of a concert diva. "It's hard to talk away the mem'ries that you prize."

To go back to the start: In this version of the well-worn story, Dr. Henry Jekyll is working on a serum that he hopes will remove the evil from mental patients at the local asylum – where his father is held, suspended in a straitjacket, in a haunting image that bookends the show.

The board of directors at this institution denies him the opportunity to use their patients as subjects. These are respectable and rich individuals who, their snooty dialogue and a song sung by maids and butlers called Façade tells us, are secret hypocrites; it's hard to argue, though, that they don't have their priorities right in not letting a mad scientist run glowing-red drug trials on their inmates.

In any case, this is what leads Dr. Jekyll – who is slated to marry the asylum director's daughter, Emma (a lush-voiced and lovely Teal Wicks) – to inject himself in his basement laboratory, leading to his bifurcated personality problem and murderous rampages that end up taking out a good chunk of the 1 per cent of Victorian London.

Wildhorn has made a career out of exploring people torn in two directions. In addition to Jekyll & Hyde, his musical accomplishments include 1999's The Civil War and some of the songs in the 1995 stage adaptation of Victor/Victoria.

Here, however, there's not a heck of a lot of complexity to carry the show through its comic-book plot. Even the two leading ladies, neither of whom exists in the 1886 novella, conform to Victorian stereotypes of the "angel in the house" and the "fallen woman." It's difficult to take any of it as seriously as it takes itself.

Deborah Cox makes a sound decision to leave a lasting impression
May 9, 2018 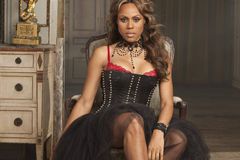