The Shaw Festival's short, prelunch shows never fail to please – and director Blair Williams's funny, fulsome production of A Lovely Sunday for Creve Coeur by Tennessee Williams (no relation) is no exception.

It helps, of course, that a short, prelunch show is free of expectations: it's impossible to be truly disappointed by an amuse-bouche.

This is the ideal context, then, in which to see one of Williams's later plays. After penning masterpieces such as The Glass Menagerie and Cat on a Hot Tin Roof, the Mississippi-born playwright fell out of favour with critics and audiences when he went off in the new, non-naturalistic directions in the 1960s. Why? Expectations, primarily.

It's only in recent years that theatre companies and directors have been re-examining the works he penned between The Night of the Iguana in 1961 and his ignominious death – choking on the cap of a bottle in a New York hotel – in 1983.

A Lovely Sunday for Creve Coeur, written in 1978 and the most naturalistic of these later works, begins around 11:30 a.m., fittingly, and takes place in real time over a Sunday in St. Louis in the 1930s.

Dorothea (Deborah Hay) is doing her bust-improvement exercises as she awaits a noon-hour call from one T. Ralph Ellis, the principal of the school where she teaches. A Southern belle with a bad breakup in her past, she recently spent a special evening in Ellis's Reo Flying Cloud, and she believes an engagement is imminent despite their differences in social class

Bodey (Kate Hennig), the German-American with whom Dorothea shares a cramped apartment (a suitably cluttered design by Cameron Porteous), is desperate to get her roommate away from the telephone to a picnic in the park with her brother, Buddy. Buddy, like his sister, is solidly built and known to drink zwei times zwei times zwei bier in a day, but Bodey believes the two would be an excellent match.

Arriving on the scene to complicate matters is Helena (Kaylee Harwood), a snooty colleague of Dorothea who is the cheerful bearer of bad news – and who wants to spirit her friend away to a more fashionable address.

There is an actual park in St. Louis named Creve Coeur, but the children of Trudeau in the audience will realize that "crève-coeur" also happens to be French for "heartbreak." Whether it's Dorothea or Buddy (or possible Bodey) headed for that address on this lovely Sunday is what is in question. Frequent interruptions from a sobbing single lady (Julain Molnar in a thankless role), who has recently lost her mother, provide a constant reminder of the theme.

With its deluded belles, disappointing suitors and throwback setting, A Lovely Sunday for Creve Coeur seems like a one-act redux of earlier plays such as A Streetcar Named Desire and The Glass Menagerie – and Williams apparently hoped it would win back the critics. (It didn't.) But the comedy is actually significantly different in trajectory and tone from his earlier works. With jokes about diarrhea and premature ejaculation intruding, it might even seem like a parody.

Hay is such a truthful comedian, never condescending to any character she plays, however, that her fate provokes anxiety even if Williams (the director) amps up the slapstick and Williams (the playwright) makes her deal with such ignominies as overflowing toilets and howling Germans. Hennig gives a sensitive, solid performance to complement her, while Harwood is just plain fun to hate. Free from the burden of expecting a masterpiece, it's easy to enjoy and even be moved by a piece where Williams was kinder to his characters than the sadistic critics he courted with it wanted.

Theatre Review
The Sea: Easy to laugh at, impossible to forget
July 14, 2014 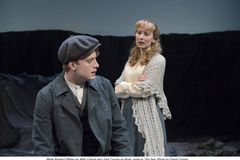 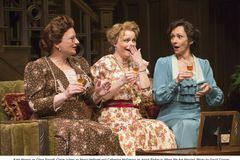 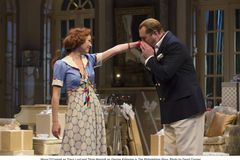