The Play's The Thing

At Soulpepper Theatre Company in Toronto

You probably didn't see it, but Pamela Mala Sinha's debut as a playwright was a stunner.

In 2012, the actress – a veteran of Canadian stages who also spent four seasons on ER – premiered a solo show called Crash in the tiny back space of Theatre Passe Muraille. The play was about the aftermath of a brutal rape; unflinching in its intensity, it was a true shock to the system.

While fewer people saw Crash than Ins Choi's Kim's Convenience that season, no one who did could begrudge the former winning the best new play award at the Dora Mavor Moore Awards over Soulpepper's hit family comedy.

That, apparently, includes the folks at Soulpepper, where Happy Place, Sinha's sophomore effort as a playwright, is now having its premiere.

Happy Place is, in a way, a sequel or spin-off of Crash. In an early draft of Sinha's first play, she had her main character encounter a number of women staying at an in-patient care facility for those suffering from suicidal depression.

Those women were excised from that script – but now have resurfaced in this one.

Samira (Oyin Oladejo), a Canadian actress from Winnipeg with a similar story to the survivor we met in Crash, is the first we meet in director Alan Dilworth's production. She wanders the stage touching the walls of Lorenzo Savoini's white cube of a set, making doors, television sets and refrigerators appear. (Less magically, she also lugs a couch on stage and puts it in its proper place.)

Samira is the "new girl" in this American mental hospital (costing $800 a day, we hear) – and soon enough we've met five other residents, all played by powerhouse actresses.

Sinha herself is performing in the play as a woman who put her son in the path of danger and is unable to forgive herself. Stratford veteran Diane D'Aquila forcefully fills out the character of an older woman who's suffered a traumatic injury during a hysterectomy.

Caroline Gillis is believably annoying as the eager beaver on the ward, whom the other patients suffer with patience, while Irene Poole is affecting as an upper-class woman who is being left by her long-time partner – and is torn apart by the fact she might never see the stepson she raised again.

Last by not least, Liisa Repo-Martell gives her most complex performance in years – playful but anguished, and deeply human – as a woman who may or may not be pregnant.

The only misfire among the characters is the doctor, Louise – she is less than convincingly written, and a bland Deborah Drakeford does nothing to sell the part.

There's not much in the way of plot to Happy Place. Why these women are in the ward, where they are on suicide watch, is either revealed or it isn't by the end of two atmospheric acts.

Clearly, Sinha wanted to avoid writing a narrative that exploits the awful traumas her characters have suffered. At one point, she pokes fun at that tendency in popular culture, having the women hilariously discuss a movie of the week called Please God, Not My Baby Too.

Likewise, Sinha seems to want to avoid providing any easy answers regarding mental health and healing. Two of the characters check out of the ward over the course of the play, but it's not clear whether they're even remotely less suicidal when they do so. Among those who remain at the end, any observed progress is small – a fragment of a memory recalled, a truthful thought shared, a yogurt cup taken instead of rejected.

What Happy Place is reacting against is clearer than what it wants to be itself. Given Crash was such a powerful monologue, it's perhaps surprising that the moments of direct address in this play are the weakest. But they feel transposed – especially given we're in an environment where there is plenty of opportunity for naturalistic openness whether in group therapy or through journalling.

Indeed, the best scene comes when Samira reads, reluctantly, from her diary to Kathleen. It works because not only is something being revealed in that moment, something is happening. (A friendship is being forged.)

Some of Happy Place's calmer moments are its loveliest – when the women are simply playing Scrabble, or accidentally end up in conversation about swinging, for example.

But Dilworth's production doesn't create enough of a sense of place for the action, making the script more nebulous than it might otherwise be. His visual framing of this story as Samira's is misleading, while the casualness and matter-of-factness he aims for in his direction ends up coming off as haphazard and even sloppy at times. This production, for all its strong sharp fragments, primarily makes you excited for what Sinha will write next, from scratch.

Along with premiering this brand new play, Soulpepper revived one of its oldest productions this week.

The Play's The Thing is humorist P.G. Wodehouse's adaptation of Hungarian playwright Ferenc Molnar's 1926 classic, The Play at the Castle. Director Laszlo Marton first directed the comedy for Soulpepper in 1999, in the company's second season, and again in 2003.

The plot is simple: Albert (Gordon Hecht), composer of a new operetta with the great playwright Sandor Turai (Diego Matatoros), arrives unannounced at a castle to surprise his fiancée, Ilona (Raquel Duffy) – only to accidentally overhear his prima donna making love to baritone Almady (C. David Johnson) in the room next door.

It looks as if tragedy is on the bill, but Sandor steps in to use his dramatic skill to rewrite reality in order to save his composer – and his new operetta, of course.

Having watched the Shaw Festival bungle a comedy about theatre this season by going too far over-the-top (with Moss Hart's Light Up the Sky), and the Stratford Festival similarly miss the mark the season before (with Noel Coward's Hay Fever), The Play's The Thing is, first and foremost, a giant relief. The Soulpepper ensemble manages to portray theatre people as people – and, instead of amping up the theatricality, it is dialled down.

Way, way down, in fact. In his quiet, unsettling take on the scene that begins the play, Marton asks the audience to truly ponder the difference between performance and reality. He makes clear that there are actors who want to be seen acting, and actors who don't – and, likewise, spectators who want to believe and others who don't.

This a subtle production that builds slowly, but that only makes the unleashing of laughter in the final act that much more joyous. Johnson is particularly funny as the petticoat-chasing Almady because you feel for him as he is undone (and forgiven); and Gregory Prest makes a neurotic stage manager named Mel as hilarious as possible without ever stealing the show. This is ensemble work that reminds why Soulpepper first caught on. 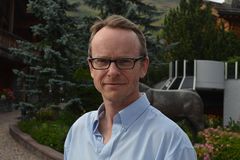 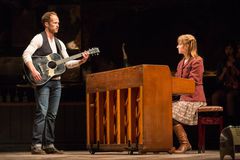 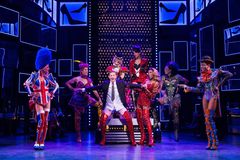