At Factory Theatre in Toronto

At the Coal Mine Theatre in Toronto

What would you do if the power went out in the middle of January – and didn't come back on? Would you have any idea how to survive for more than a couple of days in the cold?

The Unplugging, a play by Algonquin playwright Yvette Nolan that won the 2013 Jessie Award for outstanding new script, imagines life in Canada after a series of catastrophic events has taken out the electrical grid – and, even more frighteningly, Google.

In a community located somewhere between Winnipeg and Saskatoon, things have gone a little Lord of the Flies – and we enter the story at a point where older women such as Bern (Allegra Fulton) and Elena (Diana Belshaw) are being cast out into the frozen wilderness because they aren't "pulling their weight."

Luckily, Bern, an aging party girl who thinks she has no survival skills, knows the location of some secluded cabins where the two can seek shelter, while Elena, a grump called Eeyore by friends and enemies alike, has a little pre-Internet knowledge in her head from having spent time with her trapper grandmother as a child.

The tone is largely comic despite the dire situation. There's a little Waiting for Godot here, as Bern and Elena talk about nothing and everything as they wait for spring – which, as we know, in Canada often seems as if it will never come – and a bit of The Odd Couple, too.

But there's also a fair amount of The Walking Dead in The Unplugging, as the two women go out on supply runs to find food and ammunition – albeit having to watch out for bears rather than zombies. (This is perhaps the first Canadian play I've seen that extols the virtues of gun ownership; but how else are you going to kill a moose after society collapses?)

Being the type of person who doesn't know how long to keep leftovers safely without consulting a search engine, I found The Unplugging an engrossing adventure – even if Nolan delivers the play's morals without removing her mitts. (Respect aboriginal culture and your elders!)

It's a pity that director Nina Lee Aquino's production at Factory Theatre (a co-pro with Native Earth Performing Arts) is almost completely lacking in suspense. From the first scene where the actors unconvincingly shout over storm sounds, there's no real sense of peril here. Instead, we get plenty of awkwardly executed ritualistic movement (choreographed by Clare Preuss) and repetitive scene changes where the sun moves back and forth across Camellia Koo's lumpy, ugly set. The actors weren't really connecting on media night – and only the endearingly gruff Belshaw seemed to know how to wield a rifle like she meant it. This is a wimpy take on a strong script.

Bull gets a much slicker presentation at the Coal Mine, an intimate new venue located under a pizza joint on the Danforth. But British playwright Mike Bartlett's script is all superficial, sadistic style.

In Bull, Bartlett locks three employees in a room to compete over two jobs – a situation familiar from television. Indeed, The Apprentice is even name-dropped, while one character proclaims, "I'm not here to make friends."

But this script makes reality TV seem full of complex characters and clever plotting by comparison. Physically fit monsters Tony (the standout Damon Runyan) and Isobel (Diana Bentley) team up to destroy the confidence and chances of the shorter, rounder Thomas (Ryan Rogerson). When the boss arrives (Mark Caven) explaining that he has to "cull to save the species," it's clear who he's going to pick, and there are no narrative twists to speak of.

With Tony pulling up his shirt to show his rock-hard abs, and Isobel leveraging her sexual appeal and history of sexual abuse to get a leg up, it's all too over-the-top to be taken seriously as satire. At a certain point, watching a man be relentlessly bullied stops being funny, then stops being shocking. Bull is nasty, it's brutish and, at just under an hour, it's certainly short – but not quite short enough.

Kat Sandler's Retreat, which premiered at the Storefront Theatre in the fall, was more original, perceptive and much funnier on a similar subject, even though it painted a bleaker situation – four interns competing for a single staff job.

Director David Ferry certainly has put together a tight production – but the real masterful Bull is to be found in his moralizing program note about workplace bullying (the CBC is mentioned) and corporate Darwinism. Bartlett's play is not in any way a coherent critique of the excesses of capitalism; it's a celebration of cruelty. Enjoy!

The Unplugging and Bull continue to April 5; visit factorytheatre.ca and brownpapertickets.com for tickets and times. 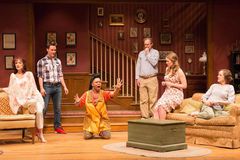 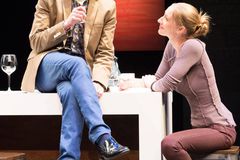 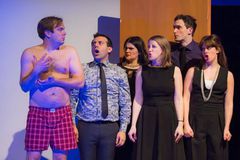