The most exciting battles in Antony and Cleopatra are the ones that rage within the Queen of Egypt. At least, that is the case in the Stratford Festival’s latest production of the Roman tragedy starring Yanna McIntosh.

Take the scene when a messenger arrives to inform Cleopatra that her lover Mark Antony (Geraint Wyn Davies) has remarried – and to his enemy Octavius Caesar’s sister, Octavia, no less. Cleopatra is at first overjoyed at receiving any news about her lover but then flies into fury when she hears the message, knocking the poor messenger on his back and pulling a knife on him. Then, she calms and becomes clear-headed, swinging from one extreme to another in the course of a single line of pentameter, switching gears mid-iamb. “Turn all to serpents! Call the slave again,” she says. “Though I am mad, I will not bite him.”

In his famous speech, Enobarbus, Antony’s pal (played with real personality by Tom McCamus), describes Cleopatra’s “infinite variety” – which can sound like a euphemism for hysterical or theatrical or other adjectives once assigned to women, supposedly ruled by emotion rather than reason. Men are Apollonian; women are Dionysian. Men are from Rome; women are from Egypt.

In McIntosh’s performance, however, there is no such divide. Her Cleopatra contains both stereotypically masculine and feminine traits as a ruler, and her madnesses have method to them. She's an Egyptian that leans in, and first and foremost an actress – of the very controlled and in-command type that excel at certain classical theatre festivals.

Even at her most wild, McIntosh seems calculated in her hot-headedness. Her impulses are planned and only once get truly out of hand – when she fakes her own death, leading to a real pile-up of bodies.

McIntosh’s is a fitting Cleopatra for director Gary Griffin’s production of the play, which (like Wyn Davies’s aloof Antony) moves swiftly but bloodlessly, and is more concerned with politics than passion.

Despite having their names in the title, Antony and Cleopatra and their relationship often play second fiddle to the wars that rage in and around Rome in Shakespeare’s play.

The action begins, roughly, where Julius Caesar ends – with Antony, Octavius Caesar (Ben Carlson, enjoyably petty and bureaucratic) and Lepidus (Randy Hughson) ruling the Roman republic as a triumvirate. Naturally, such arrangements will not hold – and Antony, more interested in his affair with Cleopatra than affairs of state, is surprised by challenges from the outside in the form of Pompey (Brian Tree) and inside in the form of a backstabbing Octavius.

Antony and Cleopatra reads most like a screenplay of Shakespeare’s scripts, with a succession of short scenes, and about 220 entrances and exits. Stratford’s Tom Patterson theatre – a long, thin stage sandwiched between stands of audience members – is not the most appropriate for such an action-packed play. Griffin’s often bland production is often like watching a fashion show on fast forward, with actors sprinting up and down this cat-walk. Lanterns descend from the ceiling to denote a shift to Egypt, only to then float back up into the rafters. (Charlotte Dean is the designer.)

Even with all this busyness, Shakespeare's script seems to be missing crucial moments. Where is the scene where Antony and Cleopatra reunite after his remarriage abroad? Griffin’s production does not fill in the blanks with the leads, though there’s a lovely moment near the end of the play where Enobarbus is regretting betraying his friend and the director allows Wyn Davies’s Antony to remain on stage in dumb-show while he is being spoken of in loving tones. This overlapping of worlds would have worked neatly elsewhere, too. Ultimately, something’s missing in an Antony and Cleopatra where the romance is outburnished by the bromance. 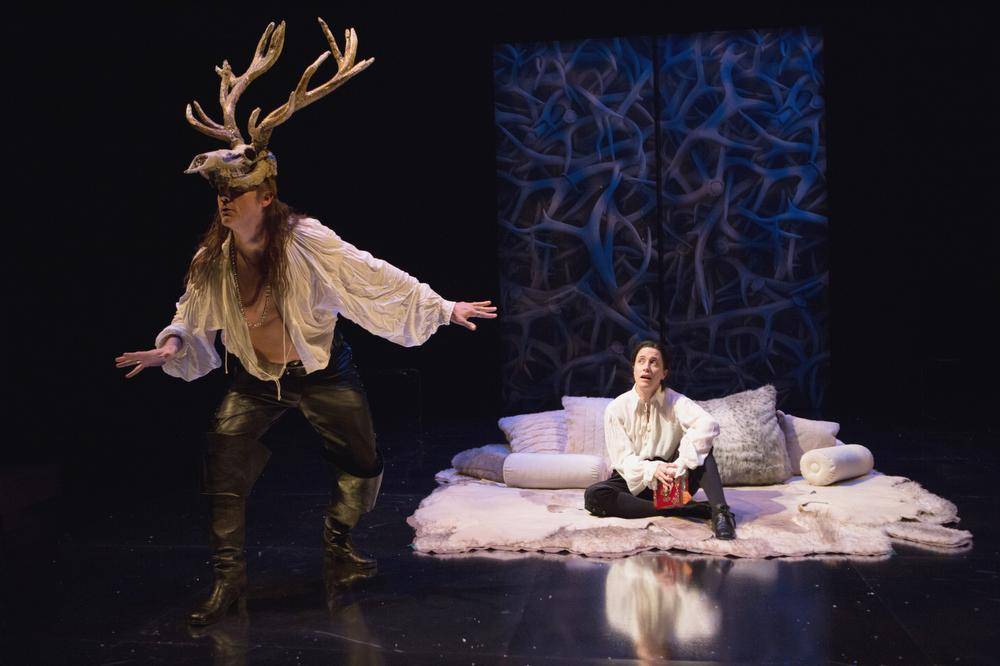 In Christina, The Girl King, Quebec playwright Michel Marc Bouchard gives us a compelling, if occasionally confused, portrait of another female leader – one who rules by reason and is undone by passion.

Christina, played with panache by Jenny Young, is a real figure, and Bouchard keeps roughly to the historical record. She ruled Sweden for 20 years in the 17th century, causing political trouble at home by refusing to marry and produce an heir. Instead, she had a close relationship with a countess named Ebba Sparre (Claire Lautier); it sent shock waves across Europe when she abdicated and converted from Lutheranism to Catholicism.

Christina, The Girl King is Bouchard’s attempt to write a “classic” play – and he has imagined the Swedish court richly, with gossipy ladies in waiting (a strong Brigit Wilson), a visiting philosopher named Descartes (John Kirkpatrick) and a conniving Catholic double-agent (Kevin Bundy).

The tension between Bouchard’s subject matter and his grotesque or Gothic theatrical sensibility is not fully resolved in director Vanessa Porteous’s production, which seems a compromise between high style and historical.

As Christina’s mad mother, Patricia Collins plays up the wilder elements in her character and finds success. Likewise, there’s unhinged entertainment in Graham Abbey’s portrayal of Christina’s vain and vicious adopted brother, Count Johan Oxenstierna, who spends much time admiring his boots before grinding them in others’ faces.

Too often, the actors struggle with the material – speechifying in their best Stratford voices, making Bouchard’s often unwieldy script seem almost like a parody of poetic drama. As Christina’s amorous cousin Karl Gustav, Rylan Wilkie seems constantly stymied by what he has to say, while Kirkpatrick’s Descartes flounces dramatically.

Christina, The Girl King may be a snug fit with Stratford’s programming, but, stylistically, it would need a less compromising, more consistently stylish production to really sing.