At Theatre Passe Muraille in Toronto

'That was intense," says a character near the end of Parents Night, one of the two new George F. Walker plays premiering as a double bill at in Toronto's Theatre Passe Muraille Mainspace. Talk about an understatement.

Walker has always been a cranked-up (not to say cranky) playwright, but Parents Night and its partner, The Bigger Issue, start in a key of near-hysteria and never let up. The king of psychotic comedy, Walker just keeps piling on the raging tirades, crazy plot twists and jaw-dropping revelations like so much fuel on an out-of-control fire. Neither one-act play ends, so to speak – after 60-odd minutes director Wes Berger simply brings down the lights while the characters are still talking.

At 67, Walker hasn't mellowed one iota and the latest outlet for his angry satire is a failing education system. Parents Night and The Bigger Issue – the first instalments in a projected play cycle à la his famous Suburban Motel series – are set in public-school classrooms after hours and involve confrontations between stressed-out teachers and ticked-off parents.

Parents Night finds Nicole (Sarah Murphy-Dyson), a Grade 3 teacher, caught in the crossfire between John (Matthew Olver), an arrogant executive dad, and Rosie (Dana Puddicombe), a ballsy working-class mom. Both are there to see Nicole about problems with their children, but class warfare quickly erupts. As expected, the kids' behaviour turns out to be merely a reflection of their parents' messed-up lives, which involve infidelity and drug addiction just for a start. A harried Nicole is dealing with troubles of her own – a career crisis, a death in the family – but she makes a brave attempt to discipline these overgrown brats.

The Bigger Issue covers the same ground but digs deeper. Suzy (Julia Heximer), a novice Grade 7 teacher, has been called on the carpet by the principal, Irene (Murphy-Dyson), for physically accosting a violent student. But when the boy's parents (Puddicombe and Olver) show up, it becomes clear that they're a middle-class couple reduced to abject poverty – shades of Walker's 2010 play, And So It Goes… – and the real problem isn't their son or the school but a dysfunctional society.

Walker is full of sympathy for the embattled educators, all three of whom get to vent their frustrations, and he's typically understanding of the desperately poor – the executive is the only character treated as a total jackass. But while the playwright's outsized personalities and over-the-top scenarios get a lot of laughs, he can't resist pushing them to cartoon extremes until his satire loses its bite and becomes silly.

The plays are produced by CrazyLady, a fledgling, Walker-mentored theatre company that originally staged Parents Night in Hamilton last year. Walker's writing is a licence to chew the scenery and the company's young actors go at it with an appetite. Puddicombe stands out as the rude Rosie, a bulldozer in tiger-striped leggings – even if she later gives a variation on the same performance in The Bigger Issue. Murphy-Dyson is hilarious as the burnt-out principal Irene, who scratches herself compulsively as though she were allergic to authority. Olver excels as a couple of feckless males and Heximer's rookie teacher is the picture of perplexity and despair.

While Walker is wrestling with education on the Passe Muraille mainstage, in the theatre's tiny Backspace actress Nicky Guadagni revels in obsession.

Guadagni begins with the two loathsome ones. Hindley, who with lover Ian Brady murdered at least five children and teenagers in Manchester in the 1960s, is played as a hard, defiant woman who recounts her life and crimes in a strong Mancunian accent. She recalls how she and Brady bonded over Nazi atrocity books and went on a movie date to see Triumph of the Will. Then Guadagni transforms into a giddy, upper-class Mitford, the racist nitwit who did them one better – she hung out with Adolf Hitlerhimself.

Fitzgerald appears next, as a drunken Southern belle, woozily dancing about the stage and rhapsodizing over her husband-cum-drinking buddy F. Scott, even as he degenerates from her handsome East Coast prince into a pot-bellied alcoholic. Carrington is no less eloquent as she recounts her hopeless love for the gay biographer Lytton Strachey. But Canadian writer Smart, whose fiery passion for married British poet George Barker is enshrined in her febrile classic By Grand Central Station I Sat Down and Wept, gives a clear-eyed account of obsession's aftermath, as she struggles alone to raise their four illegitimate children.

The similarities among the seven women, while unifying the poems, also become their drawback. Towards the end you feel as though you're hearing the same story over and over with minor variations.

Guadagni, however, is brilliant. She slips easily into each character as if it were the simple black dress that serves as her only costume. She not only embodies each woman vocally and physically, but in some cases her performance also evolves as the character relates her life story. With Elizabeth Smart, she begins as a bold young thing, her eyes bright with determination, and ends as an exhausted old woman taking comfort in her gardening.

Guadagni, a veteran stage and television actress, has done this show before – including a 2013 run at the Edinburgh Fringe – and her performance is finely honed. In keeping with her restless characters, director Layne Coleman has her roaming all over the stage – empty except for one a chair – as well as in its aisle and upper tier. She's followed by Rebecca Picherack's moonbeam lighting and accompanied by a pensive score, played live on guitar by composer Victoria Carr. Whether or not you share Carolyn Smart's obsession with these women, Guadagni will leave you beguiled. 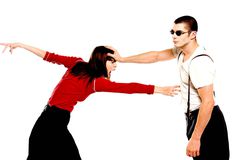 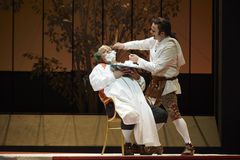 Theatre Review
Delivered late, but Tom at the Farm is worth the wait
April 17, 2015 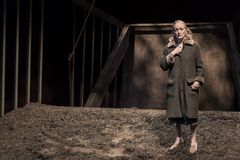