Opera Atelier began its 30th anniversary season Thursday night with a revival of its celebrated production of Jean-Baptiste Lully's Armide, a show that's travelling to the Royal Theatre in Versailles just after it finishes its run in Toronto. A company that started stretching boundaries and defying conventions in 1985 is now honoured worldwide, with recent productions in Salzburg and La Scala garnering rave reviews. No surprise, given the excellence of this Armide.

Baroque opera – the genre that Opera Atelier so lovingly restores – was and is a fascinating amalgam of ballet, drama, comedy, luscious costumes, extravagant sets and an overall dedication to theatrical opulence. Armide, first presented in 1686, has all these elements in abundance. A complex score by Lully, one of France's great composers, full of telling moments of drama, heartache, straight narration, full of the rhythms of dance. A powerful story of love and abandonment featuring a Muslim warrior-priestess, Armide and her enemy/would-be lover, Renaud, a variation on the Dido and Aeneas mythological template. Lots of opportunity for movement, an entire act devoted to two comic characters, elements of fantasy and myth – a perfect concoction for the directorial talents of Marshall Pynkoski and his choreographer and artistic partner, Jeannette Lajeunesse-Zingg.

If anything, Marshall was more restrained in this Armide than he often is with Atelier productions, because the balance of the piece as written demands far less directorial intervention. Partly that's because there is so much dance in the piece, and Lajeunesse-Zingg's choreography was employed over a much wider range than usual. As well as the elegant court dances she often creates, this production was full of scenes of furies, demons, battles, spirits – all beautifully attuned to Lully's score. Dora Rust D'Eye's costumes were a thrilling light show of primary colours and sophisticated design. Gerard Gauci's sets provided just enough mystery and majesty to entice our imaginations and Bonnie Beecher's lighting effects added a welcome touch of fantasy and magic with the simplest of means.

Musically and dramatically, Armide was solid and powerful. Peggy Kriha Dye returned to sing the title role, as she did for Atelier's 2012 production, with a sharp edge to her clear soprano, as well as a tinge of darkness and tragedy to her performance. Colin Ainsworth was a winning Renaud, her enemy turned lover, alternately boisterous and bucolic, very effective in his love scenes. Daniel Belcher provided a chilling reading as Hate, a Devil-like character Armide summons to avenge her; Stephen Hegedus was a persuasive Hidraot, Armide's ally, and Meghan Lindsay and Carla Huhtanen were charming companions to Armide. Huhtanen, especially, as a spirit conjured up in Act 4 to beguile one of Renaud's warriors, was riveting.

The Tafelmusik Baroque Orchestra, under the direction of David Fallis, and members of the Tafelmusik Chamber Choir deserve more than a passing mention. I noted earlier that Lully's score is full of all kinds of music, from straight recitative with continuo, to orchestral interludes, to full-blown arias. The musical fabric of the baroque stage was far different than ours, more diffuse, and the necessity for decisive and devoted playing to keep it all together is paramount. Tafelmusik provided all that and more, with a committed and passionate performance.

When Opera Atelier began their artistic journey 30 years ago, they were something of a curiosity – an elegant and fascinating curiosity. Today, they've almost become commonplace, so thoroughly have we, their audience, assimilated their basic theatrical grammar and syntax. At their best, as in this Armide, we now can get beyond the novelty of their theatre and through them approach the essence of the baroque style, which, in the end, is about how we perceive time, and story, and leisure, that ease of the imagination that allows artistic pleasures full sway. 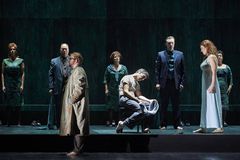 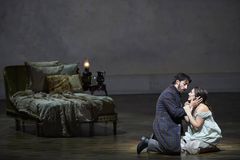 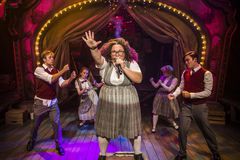