In Revolution in the Head, his brilliant book about the Beatles' music, the late Ian MacDonald dismissed the 1994 biopic Backbeat as a "crude caricature" of the band's early days in Hamburg. That may be true, but it's certainly livelier and more convincing than the flimsy stuff that passes for drama in most jukebox musicals.

Not surprisingly then, the film's musical version, Backbeat: The Birth of the Beatles – now playing Toronto's Royal Alex – is much better than we've come to expect from such nostalgia trips. This production, which premiered last fall in London's West End, is enjoyably moody, dirty and raucous. Just like the five scrappy Liverpool lads whose apprenticeship it charts.

Yes, five. This isn't only – or even primarily – the story of the four future pop gods, but also of their original bass player, the beautiful, doomed Stuart Sutcliffe. As Beatles fans know, he was John Lennon's art-school pal, a promising artist with James Dean-style good looks whose brief time with the band is immortalized in the photos of Astrid Kirchherr.

Sutcliffe fell for Kirchherr, a bewitching German bohemian, during the group's 1960 sojourn in Hamburg. She would help create the Beatles' signature mop-top look, but she also led Sutcliffe to realize that art, not rock, was his real passion. Backbeat, in fact, is both a crossroads story and a love triangle, with Stu (Nick Blood) torn between his best mate John (Andrew Knott) and his new girl Astrid (Isabella Calthorpe).

His dilemma plays out as the nascent Beatles are paying their dues in the smoky underground clubs along Hamburg's seamy Reeperbahn. That means bashing out loud, frenetic covers of American rock 'n' roll hits between strip-tease acts for a crowd of boisterous drunken patrons. Director David Leveaux captures the chaotic atmosphere in his staging, as the band plays amid a vortex of German groupies, bouncers and drag queens. (At times, the show looks like a mashup with Cabaret.) Knott, Blood and the three other actor-musicians, meanwhile, do a smashing job of recreating The Beatles' early sound in songs ranging from Little Richard's feverish Long Tall Sally to Smokey Robinson's exquisite You Really Got a Hold On Me.

Iain Softley, who directed the original film, has adapted it to the stage with the aid of playwright Stephen Jeffreys (The Libertine). They've made various changes, which include portraying Paul McCartney as more of a driving force in the band. Daniel Healy's ambitious Paul is now seen winning over record producer Bert Kaempfert (Charles Swift) by singing A Taste of Honey, and urging Knott's dismissive John to start thinking seriously about writing their own songs. The Beatles' first drummer, Pete Best (Oliver Bennett), also gets more opportunities to share his viewpoint. In a scene where new manager Brian Epstein (Mark Hammersley) has to tell Best that he's being sacked, Bennett makes his soul-crushing disappointment palpable.

Daniel Westwick's callow, teenage George Harrison, on the other hand, remains mostly on the periphery (though he does display some of the "serious" Beatle's famous dry wit). Ringo Starr (Adam Sopp) only makes an appearance near the end and is, predictably, cheerful.

As he was in the film, Sutcliffe is the main focus, played here by Blood as sensitive and poetic, forever wearing shades and chain-smoking. Even before he meets Calthorpe's tall, cool Astrid, he seems to belong less to the sweaty, sexual arena of rock and more to the brainy, avant-garde ethos that she represents. That may be why their romance feels a little bland – they're a perfect couple. Knott's John, by contrast, hides his love away. Wearing a face with a perpetual sneer, he spews an endless flow of sarcasm in a thick Scouse accent. The irony is that Lennon, seven years later, would also fall in love with an avant-garde foreign artist who helped influence his decision to leave The Beatles. Astrid Kirchherr foreshadowed Yoko Ono.

This is a great-looking show. Andrew D. Edwards' décor of grimy brick walls and iron staircases, and Howard Harrison and David Holmes's grainy lighting, have been inspired by Kirchherr's gritty black-and-white photos. The photos themselves are projected large on scrims, along with complementary video, designed by Timothy Bird and Nina Dunn. We also get glimpses of Sutcliffe's abstract canvases.

You come away from Backbeat admiring Sutcliffe for choosing art and Astrid over what would become the world's most influential pop band – for both knowing his limitations (he wasn't much of a musician) and following his heart. His recompense is that he lives on in shows like this one, as an enduring part of the Beatles legend.

Backbeat: The Birth of the 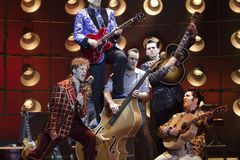 Soulpepper hits Home with comic portrait of madness
May 18, 2012 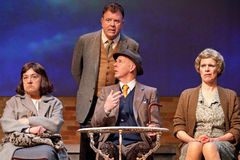