Toronto theatre celebrated a birth this week – with a musical overflowing with death.

Bloodless is the much-anticipated first full production by Theatre 20, a new ensemble that aims to become a kind of musical-theatre equivalent of Toronto's classical Soulpepper Theatre Company. Many of Canada's top triple threats – whose resumés are filled with Stratford, Shaw, Broadway and Mirvish – have banded together to reinvent classic musicals and create new Canadian ones.

The story is based on an actual case of a string of anatomy murders in Edinburgh during the early 19th century; Irish immigrants William Burke (Evan Buliung) and William Hare (Eddie Glen) plied over a dozen men and women with alcohol, smothered them and then sold their bodies to Dr. Robert Knox (David Keeley) for dissection in his medical classroom The two were aided and abetted in this by their romantic partners, Margaret Hare (Jan Alexandra Smith), who ran the rundown boarding house to which they would lure their victims, and Helen McDougal (Trish Lindstrom).

For most of his telling of the tale, Aragon hews closely to the facts of the case. When we first encounter Burke and Hare, they are simply selling the body of a lodger who died of natural causes before paying his rent.

The pounds they receive from Dr. Knox for this is a far cry from the mere shillings a day they get working as labourers in the canal. Before you know it, the two are sizing up a lodger who is near death and singing a dark and wittily written plea for euthanasia, The Bugger Is Better Off Dead. With Margaret, reluctantly, and Helen, enthusiastically, onside, Burke and Hare's definition of "better off dead" expands quickly – too quickly, in fact, to fully involve the audience in their actions.

Bloodless has a tone problem, though perhaps it's more the problem of how director Adam Brazier, who is also Theatre 20's artistic director, presents the material. Early on, the production wants us to treat these serial killings as light-hearted entertainment – Dr. Knox enters with a song that riffs on Gilbert and Sullivan's Modern Major General, for example. But soon enough, it wishes to pull our heartstrings over the plight of those who disappear without a trace.

After her friend Mary disappears, Janet Brown (Carly Street) sets out on a search for her to find only to encounter indifference from the police and the upstanding citizens of Edinburgh. Janet and Mary, you see, work as prostitutes – and the parallels between 19th-century society's willingness to turn a blind eye to "undesirables" and what happened in the case of Robert Pickton in our own time is underlined.

Bloodless has trouble transitioning from lark to this stark reality, in part because this portion of the show hits way too close to home. Thematically, the show stumbles. Is it a moral parable about a slippery slope when we treat life as anything less than sacred? Or is it more satirical, showing about how capitalism commodifies us all? (It does, after all, take place in the city and not so long after the time of Adam Smith.)

The first half of the play lives up to its title as we try to figure out how to watch the show and how seriously to engage with it. In the second act, the action does pick up a bit – as the relationships between Hare and Burke and their respective romantic partners become better defined.

While Aragon's lyrics are often witty, his score is difficult to judge on this initial listen due to technical difficulties that either overamplified or underamplified the leads on opening night. Still, it's hard to resist comparisons with two superior musicals set in the 19th century – Stephen Sondheim's morally complex masterpiece Sweeney Todd and the more melodramatic and popular Les Misérables.

Perhaps the material is less clichéd than the presentation, however. Brazier recently distinguished himself with a small-scale, actor-musician production of Stephen Sondheim's Assassins, but the creativity he showed there is rarely evident here in a rather dreary production that takes place on and in front of a single-level catwalk, lit like a sewer except for overused flashes of red. (To be fair, it seems the director's baton was passed twice in the show's development; Colm Wilkinson remains credited as "creative consultant.")

Naturally, the strongest elements are the performances. Both Buliung and Glen are excellent in the second half, when they're given more to chew on than a kind of nonchalant greed. Lindstrom, meanwhile, is one of the few who really delivers on the humour promised in the script, her flighty and materialistic Helen sparkling in an otherwise dour show.

I only wish Theatre 20 well; Bloodless shows a company with huge ambitions. If it's to achieve them, though, it may have to sign up a stable of directors with experience to match that of its performers. 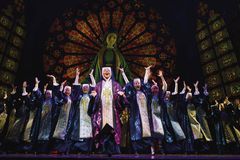 Theatre Review
Queen for a Day: Luckily, there’s Thicke, but the rest is pretty thin
October 2, 2012 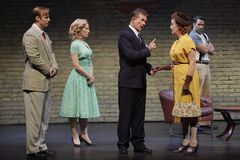