There's something inherently paradoxical about an homage to an avant-garde artist – but that's never stopped anyone from looking back at those who once looked forward.

Cage is a new performance at the Soulpepper Theatre Company in which actor Diego Matamoros, sound designer Richard Feren and everything-else-designer Lorenzo Savoini play around with the ideas of American composer John Cage (1912-1992). Most know Cage, the man, the Marcel Duchamp of music, for 4'33", his (in)famous 1952 piece that involves sitting around listening to musicians not play their instruments for four minutes and 33 seconds. ("The act of listening is in fact an act of composing," is one of his aphorisms.)

Cage, the show, is split into 12 movements or segments that are each the length of 4'33" – beginning with three solos of sorts from the co-creators.

First, Savoini plays around with fluorescent lights lined up on each side of the stage – three white one and one red. He somehow makes electric current spread slowly, as if coyly, through the tubes. This is light as art instead of illumination and is hypnotic – though it seems as much a tribute to the late minimalist artist Dan Flavin as Cage.

Next, Feren plays around with objects – cracking eggs, rolling dice, agitating a ping-pong ball in a cocktail shaker – under a hanging microphone that amplifies the sounds they make. People with knowledge of Cage's oeuvre will find references and resonances in the individual items (which Cage might have stuffed into the strings of one of his "prepared pianos" to alter its sound) and the role of chance (Cage used the I Ching to compose many of his works).

Feren ends this segment by dumping a big bowl of ping-pong balls out over the stage. Enter Matamoros, the great actor who has tackled lead roles in Moliere, Chekhov, Albee and Kushner at Soulpepper – and now runs around the stage barefoot in a white suit, following a pattern generated randomly based on where the ping-pong balls have rolled.

Soon enough, the designers and the actor are all at it together. Matamoros gives a speech about a misbehaving boy told off by his mother that he repeats in increasingly garbled ways; Savoini doodles on the side of a giant transparent cube at the centre of the stage; Feren fiddles around with more non-instruments (like a kettle) and instruments (including a theremin).

The title Cage refers to more than just the man. The show explores the idea of the body as a cage – with your mind as the door – and also has a literal cage at the centre of the stage, the aforementioned plexiglass cube, which Matamoros ends up spending much of the show inside, pretending to be a monkey. (He apes an ape with aplomb.)

The audience, sitting on all four sides observing the considered cacophony and visual chaos, is another cage for the performers, the theatre yet another, the city of Toronto one, too, no doubt, onwards and outwards to the universe.

That's about all, to be honest, I got in the way of deep thoughts from watching the show – though others are projected on screens for us to read and mull over, quotes from Cage that speak to his (new-age appropriation of) Zen Buddhist thought.

"If something is boring after two minutes, try it for four," one reads. "If still boring, then eight. Then 16. Then 32. Eventually one discovers that it is not boring at all."

Well, Cage lasts for 60 minutes – and that is just long enough for it to not be boring. But it's a strange exercise in retro experimentation.

In a piece a few years back, New Yorker music critic Alex Ross wrote that Cage "changed what it meant to be a composer, and every kid manipulating music on a laptop is in his debt."

Indeed, you can find Cage's ideas in the mainstream music genres of the day – electronic and hip-hop – and most theatregoers will be used to odd, unsettling sound environments. So what is the point of fiddling around with a radio's static sounds on stage, as Feren does, now on its own?

Savioni's set and lighting are certainly cool – but I found myself wishing that they were being used for, for instance, a production of The Glass Menagerie rather than Matamoros jumping around and trying to recreate the feel a "happening" of the sixties at a time when even "flash mobs" seem passe.

There's not enough new, or not enough old, in Cage – and it ends up feeling like quaint performance art, especially given there's nothing as anarchic in it as, say, someone slapping a piano's strings with a dead fish, as Merce Cunningham apparently did in Cage's 1960 Theatre Piece.

Cage is only on in Toronto until March 25 – but it is one of the shows that will go to New York with Soulpepper in July, the only new production among a selection of old hits it is showcasing during its occupation of off-Broadway. 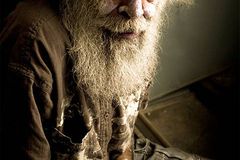 Review
The Orange Dot: A battle of the sexes that’s not worth fighting
March 20, 2017
A City: Greg MacArthur’s thoughtful blurring of fact and fiction
March 19, 2017
Follow J. Kelly Nestruck on Twitter @nestruck
Report an error Editorial code of conduct
Due to technical reasons, we have temporarily removed commenting from our articles. We hope to have this fixed soon. Thank you for your patience. If you are looking to give feedback on our new site, please send it along to feedback@globeandmail.com. If you want to write a letter to the editor, please forward to letters@globeandmail.com.
Comments