Toronto's Young People's Theatre is overrun with rats. Sniffing, scratching, singing, dancing, kazoo-playing rats. Their names are Claws, Ears, Tail, Teeth and Whiskers, and they're the tale tellers – or should that be, tail tellers? – of British playwright Mike Kenny's delightful Cinderella (a RATical retelling).

Shining the spotlight on the vermin in Cindy's kitchen isn't exactly original – Walt Disney did it back in 1950 with his animated version of the classic story. But that movie offered cute cartoon mice. Kenny's play, first produced in 2009 at the West Yorkshire Playhouse and making its North American debut at YPT, gives us great, scruffy, rope-tailed rats. Rats who are proud, feisty proletarians. Rats with an attitude. In other words, more Dickens than Disney.

(They also seem to have spent their spare time listening to old musical-comedy recordings. How else do you explain their tendency to break into upbeat numbers at the twitch of a whisker?)

To say they run away with the show would be inaccurate. They are the show. As they recount Cinderella's story, they take on all the roles, save that of Cindy herself (Steffi DiDomenicantonio) and the handsome prince (Matthew G. Brown). And to play these triple-threat rodents, director Allen MacInnis couldn't have chased down a more capable cast than Dmitry Chepovetsky (Whiskers), DeAnn deGruijter (Tail), Élodie Gillett (Teeth), Amy Lee (Claws) and Richard Lee (Ears).

Kenny, who also wrote the site-specific stage adaptation of The Railway Children presented last year in Toronto, sticks close to the familiar fairy tale. But he downplays the magic (no fairy godmother) and the romance. His mistreated heroine doesn't want to go to the ball to see the prince; she just yearns to get away from her drudgery and do a little dancing. The prince, meanwhile, is a reluctant celeb who's embarrassed by his dad's public efforts to find him a wife. He falls for Cinderella because she has no designs on him. She doesn't even realize he's the prince – despite the fact that, as he points out, he's wearing a crown.

DiDomenicantonio, a.k.a. Steffi D of Canadian Idol fame, is appealing as a gamine Cinderella and gets to show off her vocal prowess with a plaintive solo. Brown is likable as the prince. But the two can't help but be overshadowed by their comical co-stars.

Amy Lee (Jasp of the popular clown duo Morro and Jasp) and Gillett are priceless as the wicked – and wickedly silly – stepsisters, Thisun and Thatun. A couple of mean girls, their vanity is exceeded only by their hilariously inept attempts at dancing. You'd have to go back to Seinfeld's Elaine Benes to find such bad moves.

As their nasty mother, the loose-limbed deGruijter is a gawky grande dame prone to pratfalls. Richard Lee proves a master of funny voices, playing by turns a lisping, child-like rat, a domineering Asian king and a droll Scottish courtier. Chepovetsky is lovably gruff as the rodent ringleader, the Sinatra of this Rat Pack, if you will.

Kenny, a prolific writer of kids' plays, has a smart, sprightly style. Adults as well as children will be tickled by the witty dialogue, especially the rats' tendency to describe things in metaphors – ratty metaphors, that is. Cinderella, they tell us rapturously, is beautiful "like rind of bacon."

MacInnis's production uses music by local composer Jason Jestadt, who also performs his jazzy score live on an upright piano. Harvey Kogen joins him on reeds. Add Jo Leslie's choreography and the show seems just shy of becoming a full-on piece of musical theatre. To do that, though, it would require more and stronger songs.

Robin Fisher's brick-walled set, lit by Lesley Wilkinson to suggest bars and gratings, gives Cinderella's kitchen the appearance of a prison. Fisher also designed the clever costumes, which allow the actors to change instantly from rats to humans and back again.

For young ones, this is an amiable introduction to the Cinderella tale, while older kids and adults will appreciate Kenny's modern take on its romantic fantasy. And the rats are an all-ages hit. If they don't scamper their way into your heart, then they'll certainly gnaw at your funny bone.

Theatre Review
The Arsonists: One blazing night at the theatre
November 16, 2012 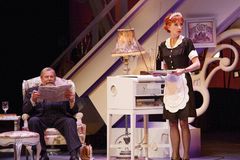 Theatre Review
The Little Years: A sad meditation on the deceptive nature of time
November 18, 2012 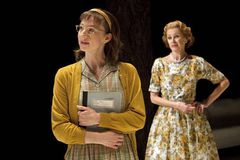 Theatre Review
A Jekyll & Hyde for the comic-book set
November 15, 2012 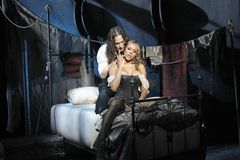