What in the blue blazes is an empty spectacle like Cirque Éloize's Cirkopolis doing as part of Canadian Stage's season?

I'm no snob when it comes to clowns and contortionists. I love what are now referred to as the "circus arts," and am proud of the Canadian companies, mostly from Quebec, that continue to dominate the field around the world – even as older U.S. outfits like Ringling Brothers have had to shut down.

It's always a happy day for me when Cirque du Soleil sets up its grand chapiteau in Toronto's docklands for one of its high-quality touring shows – or when commercial producer David Mirvish brings my favourite boundary-pushing troupe, Les 7 doigts de la main, to town.

But Canadian Stage is Toronto's best-subsidized theatre company – and presenting a pure razzle-dazzle act such as Cirkopolis, a show actually less artistically daring than some of the circuses that have visited lately via commercial avenues, is a step too far outside its mandate for my tastes.

In a city in the clouds, an office drone (Ashley Carr) goes through a dreary day pushing paper and ringing bells – until circus acts begin to happen all around him.

You know the routines: Gymnastics, group juggling, folks flying up into the air off the ends of giant teeter-totters.

Performing in the Bluma Appel Theatre in the St. Lawrence Centre for the Arts rather than a big top, Cirque Éloize is no doubt limited in the trickery it can do.

Perhaps that is why parts of Cirkopolis seem repetitive. For instance, we get a woman in a red dress spinning around in a giant hoop and then, shortly thereafter, a shirtless strongman spinning himself around in a pair of hoops linked together called a German Wheel. (This industrial-looking device was invented in Germany in 1925, the year Metropolis was filmed.)

Now, I'm not one of those people allergic to broad clowning, but even I found much of what is in Cirkopolis cheesy. To be fair, the clowns and I got off on the wrong foot, as two gibberish-spouting dudes in trench coats joking around in the audience preshow made a gag out of blocking me as I was trying to pop out for a last-minute pee. It made those watching laugh (like my traitorous wife), but I was not amused.

The 3D animated backdrops designed by Stéfan Boucher and Rénald Laurin, meanwhile, remind less of the heyday of German expressionist film in the 1920s than first-person shooters from 15 years ago, gloomy abandoned industrial spaces with lots of giant, rotating cogs.

Look: If you're jonesing for jugglers, you'll likely have a enjoyable time at Cirkopolis.

But the fact that the show – which has played off-Broadway and been taken around China by the company that introduced that country to Cats – is taking up a prime three-week slot in Canadian Stage's main stage season is irksome. (The nearby Sony Centre is the other co-presenter.)

If you've been to the Toronto contemporary theatre company in the past number of years, you no doubt know that it no longer strictly presents theatre – but, under artistic director Matthew Jocelyn, is taking a refreshing interdisciplinary approach that includes opera, dance and all sorts of hybrid work.

Should acrobats be included in this omnivorous view of the performing arts? I can see some circus shows occasionally fitting the bill – but Canadian Stage is presenting two this season, and another two next season.

If it were similarly overloaded with, say, Canadian plays, I might be more forgiving. Indeed, it was once a theatre company that would occasionally put our playwrights in a space with more than 250 seats in Toronto.

Now, Mirvish Productions' Off-Mirvish season is the only place our stage writers will find that opportunity – unless they're Robert Lepage, co-creating with a major choreographer or trying their hand at opera. 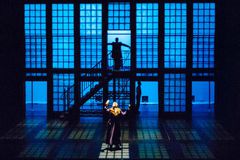 When will hip-hop musical Hamilton finally come to Toronto?
February 28, 2017 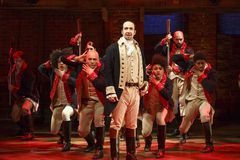 Theatre Review
Breath in Between is a surreal investigation of the limits of intimacy
February 24, 2017 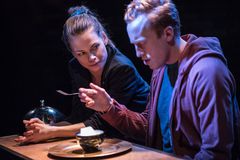