Even during George Frideric Handel's own lifetime, the highly stylized conventions of conventional Italian opera seria were severely challenged. John Gay's A Beggar's Opera put real people on stage, not kings and queens and princesses, and played out authentic situations that clicked with real-life 18th-century audiences. Ever since, the challenges of making Handel's great works accessible and real to a modern audience have been met with varying degrees of success.

But based on the current Canadian Opera Company production, which opened Sunday afternoon, count Richard Jones's adaptation of Ariodante, one of Handel's most beautiful scores, a major triumph. The decisions Jones has made to update and deepen the resonances of the opera work beautifully both to preserve the integrity of the original and add to it touches and textures that only a modern audience can appreciate. We get traditional opera seria and The Beggar's Opera at the same time.

Those resonances begin with the setting. Jones has taken the story of Ariodante, a simple Renaissance tale of jealousy, deception and eventual reconciliation, and placed it in the suffocating world of the 1970s Outer Hebrides of Scotland. Intentionally or not, a Canadian audience cannot fail to see in these homespun clothes, immediate passions and narrow, dogmatic, community life echoes of a Newfoundland outport or isolated Maritime village.

Then there's the set for Ariodante, a clever tripartite arrangement, three rooms divided by the simplest of gates that allow action to proceed in all three places simultaneously, allowing for a wealth of psychological suggestions and countersuggestions that immediately modernize the original. Those gates are immensely symbolic in Jones's productions, which is all about doors opening, and more often closing, in the community's life – closing on people, ideas, forgiveness, faith.

However, as much as Jones's production actually built on and deepened the values, plot and overall drama of Ariodante (so many of these modern adaptations reduce that drama), it's still an opera seria, with its three hours-plus of one demanding aria after another, written for star singers and needing great voices. And great voices this COC production has – in spades.

In Ariodante, that astonishing quality of singing begins with the two leads, Briton Alice Coote (in a trouser role – in other words, playing a man) as Ariodante, and Canadian Jane Archibald as Ginevra. Coote has an amazingly supple and dramatic mezzo-soprano, capable of delivering the widest range of emotion in a smoky, powerful timbre. When she wants to produce pathos, she is superb – her Scherza, infida, sung when Ariodante believes Ginevra has been unfaithful to him, was one of the greatest things I've ever heard at the COC. But when she needs suppleness and immaculate vocal control, she has it as well. Archbald's Ginevra, with her icily brilliant soprano, matched Coote, emotion for emotion, pyrotechnic for pyrotechnic. Archibald is also a fine actress, and her Ginevra, the key character in this production, was always completely believable.

But that was just the beginning of the vocal excellence on stage in Ariodante. Varduhl Abrahamyan was a vital and slimy Polinesso, the villain of the piece, a preacher who sports tattoos and biker garb under his cassock, who desires Ginevra and deceives the world into thinking her unfaithful. Abrahamyan never failed to fulfill all the intensity of her role. Ambur Braid's soprano soared beautifully as Dalinda, Ginevra's maid; Owen McCausland was in great tenor voice as Lurcanio, Ariodante's brother; and Johannes Wiesser was a provocative and tough King of Scotland, Ginevra's father.

The length and intensity of a Handel opera can be wearing at times, especially for a modern audience, but it is a tribute to the singers on stage that attention hardly ever flagged, their dramatic vocalizing was so expressive and riveting. Johannes Debus and the COC Orchestra provided something between a modern 19th-century sound and the period attacks and texture we might have heard from a Tafelmusik performing the same score. It was a perfect blend that complemented the mixture of ancient and modern on stage, and the sense of drive and passion in the pit never flagged.

So, that Act 3 dance sequence. Ariodante is supposed to have a happy ending – Polinesso's lies are unmasked, he is killed, Ariodante and Ginevra are reconciled, all is returned to normal in the Scottish kingdom. So the puppets at the end of Act 3 repeat, more or less, the same celebratory routines they had first brought to life at the end of Act 1. All is well. Except that Richard Jones has his Ginevra – the real-life one – think about what has transpired in the opera. She has been betrayed by Polinesso, disbelieved by her lover, abandoned unfeelingly by her father. As all celebrate her upcoming marriage, she, scarred, packs a suitcase and leaves. Opera seria meets A Doll's House. You wanted to cheer. If you needed one example to demonstrate why modern staging and perfectly realized music from the past need each other, this was it. 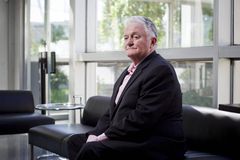 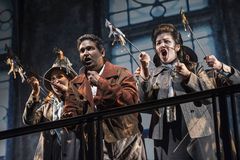