You may never look at your hands the same way after a show by the Belgian artists Jaco Van Dormael and Michèle Anne de Mey.

Indeed, standing to clap after Cold Blood, I experienced an oddly disembodied feeling, as if my hands were acting of their own accord – smacking together over and over in epileptic celebration of a show that was created for them by other hands.

Even now, I'm looking down at my laptop and wondering if those 10 fingers are the ones writing this review, not me. No, that's crazy. Let me try to explain: Cold Blood is a dance show starring hands. Three dancers let their fingers do the walking through a variety of miniature sets on rolling tables – into a small forest, through the streets of a tiny town, up and down the poles of a little strip club stage.

Meanwhile, Steadicam operators scramble around on the stage filming these phalanges getting funky, and the live feed of the small scenes is blown up and projected on a giant screen above them.

As an audience member, you can sit watching the film (starring hands!) or cast your eyes down to see how the images are being made (by whole humans). Likely, you'll go back and forth. The images Van Dormael, a filmmaker, and de Mey, a choregrapher, create are often extraordinarily magical.

In one sequence, two hands with thimbles on their index and middle fingers execute a frenetic tap dance on what looks like a tiny, old-timey film set. This appears on the big screen in black and white to the soundtrack of an old dance movie. You see hands; you imagine Fred Astaire and Ginger Rogers. The pleasure is in what performance scholar Erika Fischer-Lichte calls "perceptual multistability." Then there's a shift in perspective that was such a surprise that it led the opening audience (or their hands) to break into spontaneous applause. I won't spoil it.

Not that describing Cold Blood could entirely do it justice. This "nano-dance" is the kind of thing you really have to see. Unless, perhaps, you saw Kiss & Cry, Van Dormael and de Mey's last, similar show to visit Canadian Stage. Kiss & Cry was about a woman looking back on five loves. Cold Blood is a dream about seven deaths. Whose deaths? Your own.

"You are sleeping," an unnamed, unseen narrator (Toby Regbo) says as the lights go down. "You are already a bit of a different person."

The script for Cold Blood was written by Belgian author and screenwriter Thomas Gunzig. It's the weakest part of the show. The narrator – there's only the narrator – mainly speaks in lists. He enumerates ways you could die, places you might die, smells you could smell as you die. Each death – a car crash, a plane crash, a suicide – ends with the final image you remember before you die.

In Gunzig's repetitive scenario, this image is almost always a woman you were in love with. The perspective shifts to female for just one death – and then you are a man-eater. Literally. There's a very strange monologue – a list again – about the way different men taste to a cannibal.

Kiss & Cry was polished and groundbreaking. Cold Blood is ambitious, but not aways pulled off with the same aplomb. If you haven't seen either, I'd rush to see Cold Blood at Canadian Stage or Usine C.

If you've already seen Kiss & Cry, however, especially recently, you might GO ANYWAY. Sorry, I meant to type RUN DON'T WALK. No, I mean you could BUY TICKETS FOR WHOLE FAMILY. Wait, what are you doing, hands? No. Hands! No! HANNNDSSLSKJLSKDJFLJDSF.

Cold Blood continues in Toronto to Feb. 14 (canadianstage.com) and will be performed in Montreal from Feb. 18 to 21(usine-c.com). 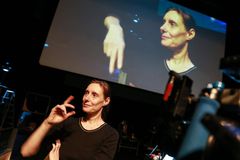 Theatre Review
Taking Care of Baby is both brain-expanding and hair-raising
February 5, 2016 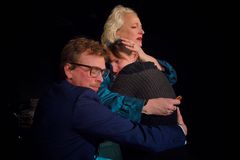