Well, Google no further. Factory Theatre and Acting Up Stage Company have the perfect match for you in Do You Want What I Have Got? A Craigslist Cantata.

This song cycle – born at last year's PuSh International Performing Arts Festival in Vancouver – sets actual ads from the online classified site to music. The resulting cabaret poignantly captures the paradox of living in an era defined by both hyperconnectedness and an uneasy sense of disconnect.

Veda Hille, the West Coast singer-songwriter, is the composer and accompanies on a grand piano live on stage. Bill Richardson, the former CBC radio broadcaster, is the playwright – or perhaps the correct term is offline aggregator.

Four musical performers portray the anonymous Craigslist scribes who type out modern-day messages in a bottle, tossed into an online ocean in the faint hope of reaching someone who wants to buy a stuffed-penguin collection, sell a dead deer, find a roommate or perhaps even a soulmate.

Bree Greig, a pint-sized performer with a 10-gallon voice, emerges as the star of the ensemble. In one number, she poignantly plays a 23-year-old sandwiched between childhood and adulthood who wants to get rid of 300 stuffed animals because she's worried that her collection is scaring off men. In the next number, she's the bemused mother of a little girl who keeps pulling the heads off dolls – and therefore has a pile of decapitated Barbies to give away. (The child therapist, this mom explains with a shrug, says she should let her child keep doing it.)

Daren A. Herbert, who must have the best comic timing of any musical-theatre performer in the country, doesn't disappoint here, particularly playing a man who is looking to have a nearly nude coffee with another man, but is emphatically "NOT GAY" (this must have been in all caps in the original ad). He also provokes guffaws with a euphonium solo and as the one character a show about the Internet could not omit: a cat.

Selina Martin is the very picture of the Internet cat lady, with a stare that could rival Overly Attached Girlfriend's. Occasionally on opening night, Martin's voice wandered off like a lazy eye, but she made up for those lapses with solid electric-guitar skills and even a haunting saw solo in a tune about a child-sized guillotine for sale ("only used once"). Dmitry Chepovetsky is her counterpart in craziness, playing a series of online creeps and trolls. He has a laid-back, character-filled voice that perfectly complements a face that constantly looks as if it's going to swallow itself.

It's hard to tell where Monica Dottor's choreography ends and Amiel Gladstone's direction begins, but the pictures the two create to accompany and illustrate the songs are lovely. I loved the detail of Hille returning to the stage eating an apple after briefly leaving for a number called Heavy Metal Roommate. The whole show finds a pleasing balance between ironic and earnest moments, and just plain weird ones. It is the interweb incarnate.

Craiglist, being a place where some people go to find "casual encounters" while, just one link below, others regret encounters that are too casual in the "missed connections" section, is really the perfect site to explore this.

Verbatim theatre – plays created out of interviews with actual people or found speech – has grown massively in popularity over the past decade, so it's not shocking to see musical-theatre creators reach for the same techniques. It is a surprise, though, to see that it works so well.

Do You Want What I Have Got? only stumbles in terms of structure. After about 50 minutes of falling in love with it, I began to experience the fatigue I associate with watching too many YouTube videos. With a stronger arc or at a slightly shorter length, however, this could be Canadian musical theatre's next killer app.

Theatre Review
With Every Letter Counts, Factory Theatre is back to muddling along
February 7, 2013 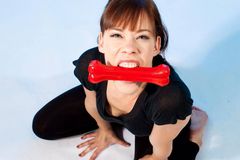 Theatre Review
In this case, Ignorance isn’t quite bliss
November 28, 2012