How on Earth did Sin Hwang get this carry-on luggage through airport security?

On a flight to Hong Kong for his father's funeral, Sin carries two suitcases that seem to contain all manners of contraband substances and liquids that clearly exceed the 100-millilitre maximum.

At the start of David Yee's new play acquiesce at Factory Theatre, we watch sand fill one of the two suitcases, falling from above in a bright shaft of light. Later, the suitcase is opened to reveal an altar full of incense sticks burning in honour of the dead – or a water-filled sink for Sin to wash his face. Each time the latches snap open, another surprise snaps out.

Acquiesce is about the strange, bottomless baggage given to us by our parents – and learning how to carry it.

Sin (Yee, also the playwright and artistic director of co-producer fu-GEN) has a stalled career as a novelist and a relationship with his partner, Nine (Rosie Simon), that is hampered by his inability to talk about his estranged father.

After he learns that his father is dead, Sin has no desire to go to the funeral – but a plane ticket arrives from his Chinese cousin, Kai (Richard Lee), as well as some papers that must be taken overseas and so he reluctantly heads to Hong Kong. On the other side of the planet, Sin, born and raised in Canada, only feels more estrangement – with Kai looking down on him for his inability to speak Cantonese and ignorance of Buddhist rituals and tradition. Then, there are the hallucinations he keeps having, estranging him from reality and making him wonder if he'll shortly be following his father into the afterlife.

Acquiesce is a more meditative work than Yee's earlier plays – such as lady in the red dress, which featured a time-travelling assassin redressing past wrongs against Chinese Canadians, or his Governor-General's Award-winning drama, carried away on the crest of the wave, which shifted from one style to the next, scene to scene as it explored the after-effects of the 2004 Indian Ocean tsunami.

What acquiesce does have that has been missing from much of Yee's jumpy writing to date is a strong emotional side – something he's been almost as evasive about exploring as the protagonist he plays here.

To be sure, Yee still has a desire to give the audience a show – one of Sin's hallucinations is a stuffed Paddington Bear that dispenses advice in a Dizzee Rascal accent – but the mournfulness of the overall proceedings eventually gets under your skin and is strongly affecting.

Yee's play certainly falls into that Canadian school of plays about the gap in understanding between the children of immigrants to this country and their parents. Estranged second-generation sons are no strangers to our stages, from David French's Mercer plays to Ins Choi's Kim's Convenience.

But Yee writes in a more lyrical, imagistic tradition than those playwrights – and there are hints here of the darker works of Wajdi Mouawad, in which the generation gap is less easily surmounted and parents only try to teach their children about who they are and where they came after they are dead.

There are overfamiliar elements to Sin as a protagonist – the moping, mourning, struggling male artist of movies such as Garden State. (Composer Michelle Bensimon's cool underscoring give the proceedings a real indie-film feel.)

Sin's girlfriend, Nine, falls into the Manic Pixie Dream Girl mode – though, at least in Yee's play, she has the benefit of actually appearing mostly in dreams. And, speaking of underdeveloped female characters, where is Sin's unmentioned mother in all of this?

It's Sin's relationship with his cousin that is most compelling here. Lee gives a satisfying, slow-burn performance as Kai – an engineer obsessed with honouring his father (and moisturizers) who gradually lets down his guard and reveals his own grievances against the older generation.

Meanwhile, John Ng is reliably funny in a series of small, comic roles, interlopers such as a fan on Sin's flight to Hong Kong and a monk who, literally, walks into a bar to explain Buddhist thinking to the Canadian. "We're both the rubber and we're both the glue: that's Buddhism," he says to a frustrated Sin.

But Ng's strongest work comes in the play's most conventional scene – playing Sin's father in a flashback. Stoic and largely silent, Ng carries the untold weight of being both abused and abuser.

While Yee's play stays in a superficial zone in his first act, director Nina Lee Aquino's staging stays shallow, occupying largely the front of the stage. But when the playwright goes deeper into the characters and themes in the second act, Aquino, set designer Robin Fisher and lighting designer Michelle Ramsay respond by taking the staging deeper as well – revealing the back area of Factory Theatre's oddly shaped main stage and exploring it all the way to the back. The space has rarely been used better or more beautifully.

The one-word title, acquiesce, is revealed to be a translation of the Chinese expression chi ku – or "eat bitter." How do sons avoid repeating the sins of our fathers? By the end of the play, Sin doesn't know – but, at least, he's openly asking the question. 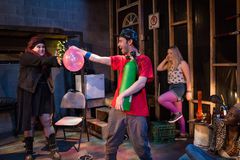 Theatre Review
Mouthpiece is entertaining and unique on the politics of women’s voices
May 17, 2018 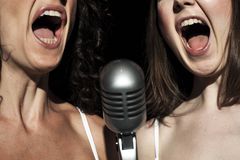