The 41-year-old Quebec playwright, the most recent winner of the $100,000 Siminovitch Prize, has developed a reputation for a rather form-forward approach to theatre over the past decade. His output has included Venise-en-Québec (2006), a dark holiday in a down-the-rabbit-hole version of rural Quebec; Félicité (2007), a nightmarish mediation on celebrity told by a chorus of Wal-Mart employees; and Nom de domaine (2012), which saw a family work through their grief by joining a multiplayer online role-playing game that immersed them in 1920s Quebec.

And those scripts were all fairly inside the box compared with Choinière's recent postdramatic works such as Chante avec moi, a satirical song cycle featuring 50 performers; and Project blanc, an audio-play intended to be secretly listened to while watching another theatre company's production of Molière.

What makes Choinière's Ennemi public a surprise, then, is that it takes a very conventional shape: It's a play about a dinner party that goes awry, hosted by a dysfunctional family that's meant to stand in for society at large. You've seen it many times before.

The four drink wine and argue over the decline of the French language in Quebec; the merits of the tabloid Le Journal de Montréal versus the intellectual broadsheet Le Devoir; and the referendums of 1980 versus 1995. Soon enough, though, the conversation turns to darker or more paranoid places – the ghoulish crimes of Luka Magnotta and conspiracy theories about the Bank of Canada, the Bilderberg Group and even vaccination.

With two or more topical arguments overlapping at the same time (a complicated act pulled off with aplomb by the entire ensemble), these scenes are less about the points of view than about the noise created by them, the desire to fight and find scapegoats rather than truly discuss and listen.

Meanwhile, in the room next door, the third generation – Marie-Claude's 10-year-old daughter (Alexane Jaimieson) and Jacques's 15-year-old son (the hilarious petulant Alexis Plante) – are having a decidedly more monosyllabic argument as they fight over the remote control. The teen boy tries to scare the girl by recounting scenes from the Jackass movies, telling dirty jokes and inventing tales of a rat that lives in their grandmother's couch.

If a Denys Arcand film is unspooling in the dining room, a Harold Pinter play is being performed in the living room, with constant, casual threats of violence.

At times, Ennemi public threatens to teeter over and out of its form in Choinière's production, which features ghostly projections and animal noises during the scene changes on Jean Bard's rotating set. The first two scenes, cleverly, take place in the same 13 minutes of time – we just see the action from a different angle in each. A subsequent scene where the two kids encounter a squirrel (Blanchette, with a hand puppet) on the balcony is dark, bizarre and original.

But, for the most part, the unexpected elements of Ennemi public are how tethered it remains to 20th-century tropes.

Near the end of the play, Ennemi public adds in a new character, Nancy – a third-generation Quebecker of Polish descent who underlines the points Choinière is trying to make. Earlier, France had complained about an Afghan immigrant family she knew in the neighbourhood – and how the father couldn't speak a word of French despite living here for many years. In Nancy, however, we meet someone who has fully assimilated into Quebec – and the picture is not pretty, as she is the biggest boor of them all. What culture, exactly, is Quebec fighting to preserve?

It's a lazy stereotype on Choinière's part to make this harbinger of doom an overweight, oversexed woman, however. And other symbols of the generational decline are similarly overlarded – France's kids want her bookshelves, for example, but not the books. Ennemi public is a state-of-the-nation play that may be very slick and very funny, but it ultimately feels overly cynical in its vision of the present, and even more so in its view of the future. 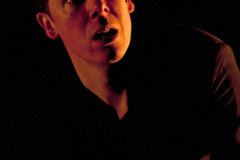 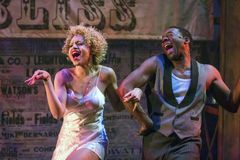 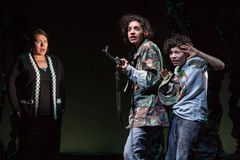 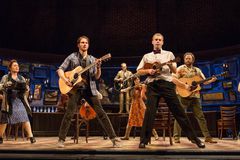 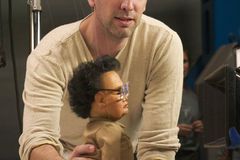 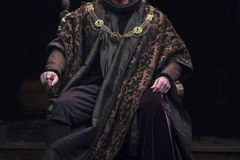