Marsha Lederman
Contributed to The Globe and Mail
Published February 3, 2017 Updated May 17, 2018

Gracie is eight when we meet her. "Meet" seems like just the right word; she feels like a new friend. We grow to care about her deeply; this audience-to-character affection develops in intensity as her story unfolds. Gracie (Lili Beaudoin) is driving from the United States to Canada with her mother, two older sisters and big brother to start a new life. Her mother is getting married and they will live in a new community; in a house divided in two, with another family – and a new best friend, Allie – living on the other side. When they arrive, there is nobody around. And then people emerge: boys ride around on bikes while girls carry around babies.

Even if you walk in knowing nothing about the play, you quickly understand that those girls may not be those babies' sisters, but their mothers. Gracie and her family are members of the Fundamentalist Church of Jesus Christ of Latter Day Saints (FLDS) and they have moved from their polygamous community in Colorado City on the Utah-Arizona border to the polygamous community in Bountiful, B.C. – never named, but certainly understood to the audience in Victoria, where Joan MacLeod's Gracie is having its world premiere.

Gracie, precocious and sweet, wise yet innocent, full of beans, is irresistible. We fall for her hard – so much so that by the end of the play, we miss the eight-year-old. Because Gracie grows up before our eyes. The play's second segment takes place four years later, opening with Gracie and Allie under the wide-open B.C. skies, the two of them practising the exaltation for when the time comes. At school, they learn arithmetic, English and "science." In social studies, they are studying "men from history." One half of the class studies Mormonism founder Joseph Smith, the other Jesus Christ.

Gracie's brother gets a job. Her sisters are married off. Babies are born. In the final segment, Gracie is 15, about to turn 16 – marrying age.

Gracie marks the first time MacLeod, who lives in Victoria, has premiered a play at home at the Belfry. A Siminovitch Prize-winning playwright, MacLeod emphasizes that this is a work of fiction; no character or event is meant to represent actual people or events in either real-life fundamentalist community. At the same time, the play was heavily researched. MacLeod read deeply about the FLDS. She visited both Colorado City and Bountiful, in southeastern British Columbia. The latter, she notes, was beautiful – but at the same time, she writes in her program notes, a community where the majority of the population of about 1,000 are descendants of seven men.

Shudder, right? As Belfry artistic director Michael Shamata writes in the company's Upstage publication, the work "could easily have become a biased and ungenerous look at a way of life that many of us frown upon."

But with MacLeod's deft, nuanced and revelatory writing, as well as Vanessa Porteous's direction and Beaudoin's remarkable performance, Gracie is so much more than that.

MacLeod's play allows us to open ourselves to the uncomfortable complexities around abhorrent circumstances; to contemplate the actual three-dimensional lives of the girls and women we get only brief glimpses of in TV footage or through court testimony.

The audience is able to see something that the play's raging grannies protesting outside the gates of the Bountiful compound aren't privy to: that in addition to the foreign horrors that are simply day-to-day living inside, there is also something familiar there – love. And that makes what looks like an easy decision – leaving – in the eyes of the protesters and those in town who mock and photograph its inhabitants much more complicated.

"They don't like the way we live even though they know nothing about us," Gracie says.

In this one-woman show, Beaudoin, in a braid and a simple peasant frock, plays Gracie at all ages, transforming before our eyes from a child to an adolescent to a teenager. She also darts out briefly into other characters – including Allie, as well as Gracie's brother, sisters, mother – and her mother's new husband (she is his 18th wife; a step up from her previous marriage where she was wife No. 23).

Beaudoin delivers what can only be described as a knockout performance. She is funny and vulnerable and utterly believable at each age, in each character. My God, I loved her. I laughed with her and wept for her. Filing out of the theatre after 90 minutes, I wanted more of her and wondered: what would become of her? I reminded myself that she is a fictional character; that's how real she was to me.

Gracie is not simply about radical, polygamous Mormons. The implications are universal; this is a story about leaving the prison of circumstances some of us have the misfortune of being born into. And it is a reminder that such freedom, even from an abhorrent situation, comes at a price. When we are trapped in such confines, what must we give up in order to save ourselves? Or to save someone we love very, very much?

Gracie is at the Belfry in Victoria until Feb. 19 and at Alberta Theatre Projects Feb. 28-March 18.

Theatre Review
Groundling Theatre Company’s Measure for Measure is all skill, no art
May 17, 2018 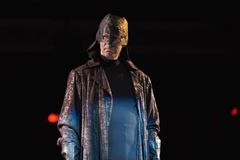 Review
Rock musical Passing Strange a soulful exploration of an artist’s struggle
April 14, 2017
Review
Annie Baker’s John is a religious experience
April 14, 2017
Follow Marsha Lederman on Twitter @marshalederman
Report an error
Due to technical reasons, we have temporarily removed commenting from our articles. We hope to have this fixed soon. Thank you for your patience. If you are looking to give feedback on our new site, please send it along to feedback@globeandmail.com. If you want to write a letter to the editor, please forward to letters@globeandmail.com.
Comments