It's hard to remember a production more eagerly anticipated than the Canadian Opera Company's revival of Harry Somers's and Mavor Moore's Louis Riel, which opened Thursday at Toronto's Four Seasons Centre. Here was the iconic Canadian opera, conceived on a grand scale, commissioned for Canada's centennial year and revived for its sesquicentennial. A co-production of the COC and the National Arts Centre. A Canadian opera presented in two major houses. An all-star Canadian cast. A renowned Canadian director.

Unfortunately, Riel didn't live up to its expectations, either dramatically or musically. Perhaps no production could. Thursday night turned out to be a difficult evening at the opera house, but for reasons that are quite illuminating. Because, despite its sweep of history and its centrality to French and English – and settler and Indigenous – cultures in Canada, the Riel story, as conceived by Somers and Moore, is actually an intimate tale of personality and humanness, doubt and uncertainty. At its centre is Louis Riel himself, tortured by his conflicting responsibilities to his people, his church, his family, his God and himself, twisting and turning as he forges an eccentric path through Canadian history. For all its historical grandeur, Riel is actually a claustrophobic story, as small circles of community – in Manitoba, among the Métis, even in John A. Macdonald's Ottawa – all attempt to grasp forces bigger than themselves.

The problem with the COC's and director Peter Hinton's Louis Riel is that a surprisingly small story, in the end, was played very large. I've never seen the gargantuan Four Seasons stage seem so immense and lonely, with vast open spaces yawning between characters who should have been in intimate connection. Sometimes characters in conversation are 20 or 30 feet from one another. Perhaps that was Hinton's idea, to portray the power of our landscape on stage, but the unoccupied spaces tended to drain the drama from the story, make everything into tableaux, turn intimacy into historical set-piece. Hinton used space this way because he had, in effect, two choruses on stage for virtually the whole opera – one representing white Canada, often arrayed in a jury box that stretched across the entire stage; the other a collection of Indigenous people, mute, the Land Assembly, as he calls it, one of his innovations to try to restore the Indigenous reality left out of the original Riel production. I wondered before Thursday whether the Land Assembly would seem irrelevant, or powerful, and in the end it was neither, actually. It was a dramatic technique that sometimes added to the sense of the story and sometimes provided mere visual interest, but tended to dissipate the drama on stage rather than heighten it. Often, the onstage chorus interceded between us and the main characters, diminishing our response to the drama those characters represented.

The failure of Riel to click had nothing to do with the individual performances. Russell Braun tried his level best to convey the complexity of the title character and was riveting in the several monologues Somers has written for the character, especially his speech to the jury at his ill-fated trial. Braun was extremely powerful all evening. As was Allyson McHardy as Riel's mother, adding the lustre of her beautiful mezzo-soprano to the powerful maternalism of her character. Simone Osborne provided a tour de force as Riel's wife, Marguerite, singing a lullaby to their baby (actually a mourning song of the Nisga'a people of British Columbia, the musical highlight of the evening). Perhaps the only principal who might have found more in his role, I thought, was James Westman as Sir John A. Macdonald. Somers and Moore don't make it easy for the performer playing Macdonald, presenting him in something of a Gilbert and Sullivan comic light. And it didn't help that costume designer Gillian Gallow had Macdonald dressed in clownish head-to-foot red plaid all night. But Macdonald must come across not just as a drunk, or a buffoon, or a mendacious schemer, but as a man of vision in Louis Riel. Among other things, that's what the opera is all about – the clash of two visions by two visionaries, Macdonald for his country, Riel for his people.

But the basic problem that all cast members had, as well as the COC Orchestra under Johannes Debus, is that Somers's score for Riel has not aged well in the 50 years since its composition. Somers wrote Riel in something of a quasi-dissonant, highly angular, international style in the mid-sixties, sort of the musical equivalent of all those anonymous steel and glass office towers that clog North American cities today. The problem with the style is that it is consummately anti-lyrical, refusing the human voice its natural concourse and ambit, and so fails to reflect a human story with essential warmth and needed passion.

And, in the end, it is a human story that Louis Riel, the opera, tells. It may take place against a background of cultural and linguistic tensions, and Hinton is to be commended for his attempts to reify the racial tensions within the story as well, but they're all oddly irrelevant to the power of the opera. This is the story of one man, after all, with the burden of community, nationhood, religious vision and family responsibility all loaded onto his frail, and maybe flawed, shoulders. It's a great story – too bad it could not have been a bit more effectively portrayed on Thursday. 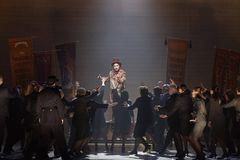 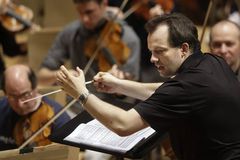 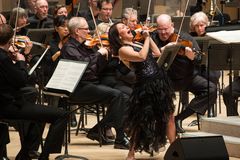 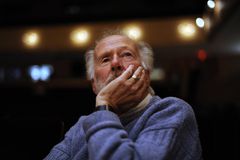