At the end of the mostly winning musical Grey Gardens, one of the two staunch women looked weakened. Or if not weakened, resigned, standing at the door of a literally and metaphorically crumbling East Hampton mansion, so much a prisoner in a home overrun with cats, co-dependency and song-and-dance delusions. On a turntable a scratchy record mockingly plays a tune about a girl who has everything: "The world on a string," so to speak. Did she though, ever? That's the question.

With music by Scott Frankel, lyrics by Michael Korie and a book by Doug Wright, Grey Gardens is the Tony-winning adaptation of 1975 Maysles brothers' cult-classic documentary on mother Edith Bouvier Beale and daughter Little Edie, who were Jacqueline Kennedy's eccentric aunt and cousin, respectively. The action of the musical's second act, set in 1973, sticks closely to the fly-on-the-wall documentary's absorbing happenings involving a fall from grace and a fascinating mother-daughter relationship.

The first act is a speculative explanation set in 1941, specifically on a day that began with such promise but which ended wretchedly unfulfilled when a mother's fear of abandonment trumped her daughter's lofty marital ambitions. By god, it's ugly, but Cole Porter-eque bounce and melody keep things moving sprightly along.

Directed by Winnipeg's Ann Hodges, Acting Up Stage Company's charming production stars Toronto's Lisa Horner as the desperate, middle-aged Mother Edie in Act I and the past-her-prime Little Edie in the more offbeat and engaging Act II. She's double fantastic, but more charismatic as the weird-dressing latter – all East Coast accent and quirky comic verve as she very eagerly engages the audience directly with a fashion manifesto like no other in The Revolutionary Costume for Today.

The play begins with the sounds of ocean waves and softly dizzying music, an effect that transports the audience to a scene of high society and tangible desperation. Young Little Edie, played with range, effervescence and a big singing voice in Act I by New York's Kira Guloien, is to be the belle of a party that announces her engagement to Joseph Kennedy, Jr.

In 1941 the Long Island mansion is in good shape and so is Little Edie, who is the adored subject of Daddy's Girl and the receiver of advice in Marry Well, but also the target for a mother's jealousy. This is the era of the Second World War, and the elder Edith's sabotaging ways could sink battleships, let alone the unsuspecting beaus of her daughter.

As for the party, mother Edith, a former concert singer, plans to dominate it with her own recital. She sings The Five-Fifteen, an upbeat number that carries an optimism – a train on its way – that is not really meant to be believed. Later The Telegram is delivered, and it is not a song of great news at all.

Set more than three decades later, Act II finds the flea-infested mansion in disrepair and the two Edies as reclusive co-dependent paupers – "the money tree came down with Dutch elm disease," is how the dire financial situation is whimsically described. Now played with pep by Nicola Lipman, the wrinkled mother Big Edie is a senior happy to be an outcast. She extols the freedom of independence, badgers her daughter awfully and tauntingly lavishes attention on a handyman boy, singing Jerry Likes My Corn with the passive aggression turned up higher than her bedside hotplate.

The mood of Horner's Little Edie is up and down. After a brief stay on her own in New York, she had returned to Grey Gardens to care for her mother, but who knows if the daughterly duty-calls explanation is genuine. She dreamed of being a performer, but her retreat back to mother and home might have been an excuse for not following her (probably unrealistic) song-and-dance aspirations.

This is might-have-been-stuff, and so is Grey Gardens, the musical. As entertaining as the speculative first act is, it feels like a well-intentioned prequel that doesn't quite live up to the documentary-based second act that follows. And, sure, a musical that devoted more time to the strange scenes of 1973 might have been less imaginative, but it might have made for a musical even more dandy than it already is. 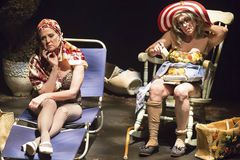 Grey Gardens and Lunar Fest: What to do in T.O. this week
February 19, 2016
Follow Brad Wheeler on Twitter @BWheelerglobe
Report an error Editorial code of conduct
Due to technical reasons, we have temporarily removed commenting from our articles. We hope to have this fixed soon. Thank you for your patience. If you are looking to give feedback on our new site, please send it along to feedback@globeandmail.com. If you want to write a letter to the editor, please forward to letters@globeandmail.com.
Comments