This summer, 400 summers after the death of William Shakespeare, Canadian Stage is producing two of the Bard's works on the company's outdoor stage in High Park that have never before performed there before: Hamlet and All's Well That Ends Well.

That Hamlet has never been done in 34 seasons is a bit of a surprise. That All's Well hasn't isn't. The little-loved comedy isn't produced all that much at indoors theatres, either.

It's one of those works reclassified by critics as one Shakespeare's "problem play" around the time of Ibsen – a confusing and inaccurate label that we should probably dump in the dustbin.

Director Ted Witzel's smart stylish production rescues this play from dated turn-of-the-century ideas about social realism (the last production I saw was drearily Chekhovian) and makes the case for it to be a comedy again, one with a satirical, modern bite to it.

Think of the play's title as ironic and the plot as a Shakespearean precursor to Stephen Sondheim's Into the Woods – and all will make sense. The first half gives us a fairy tale that ends in a wedding; the second gives us the less-than-happy aftermath of that happily ever after.

All's Well that Ends Well's anti-heroine is Helena (Mina James) – who traps Count Bertram (Kaleb Alexander) in marriage with the help of his mother, the Countess Rossillion (a suitably sophisicated Nicky Guadagni).

After the funeral of his father, Helena follows Bertram to Paris, where she helps cure the King of France (a sparky Marvin L Ishmael) from a mysterious ailment. In return, she requests – and receives from the king – Bertram's hand in marriage. It's initially satisfying to see this low-born woman get the man of her dreams through her smarts – until we realise that Bertram wants nothing to do with her.

When Bertram runs off to Florence, preferring fighting a war to consummating their marriage, Helena heads off to trap him a second time by means that are even more morally suspect.

People tend not to like this play because the romantic leads are not particularly likeable. Nor, usually, is Parolles (Qasim Khan), the vain soldier whose closeness to Bertram is disdained by everyone else in the play.

It doesn't take much of a stretch to see Parolles as in love with Bertram. Witzel's production makes that explicit – and the primary reason why the Countess and the openly homophobic Lafeu (the excellent Alon Nashman) dislike him.

When Parolles's comrades kidnap him in Florence as a prank and make him think he's going to be executed, it's always the darkest of dark comedy. Here, it takes on the flavour of a gay bashing.

But, in the aftermath, Parolles – who certainly has his faults – becomes the play's hero in this reading. Khan, who's given a snappy performance throughout, is now stirring as he says: "Simply the thing I am /shall make me live … There's place and means for every man alive." When he shows up to the final scene in a dress, it's the only time you might feel like cheering for a character.

Getting any of Shakespeare's plays down to under two hours, as per High Park tradition, requires serious textual intervention – but Witzel goes well beyond condensing the play in his production (which I saw in its final preview).

The up-and-coming director's most prominent alteration is to the switch the gender of the clown, Lavatch – and, moving a couple lines around and changing "knave" to "slut," suggest that she was a lover of the Countess's late husband in the opening scene.

I wasn't wild about this as it pulled focus away from the main plot while the story was still being set up – and makes the cynical edge of the show something immediately apparent, rather than slowly revealed.

But the revamped Lavatch – the French connotation of her name made explicit in Shawn Kerwin's cow-pattern costumes for her – eventually won me over thanks to Rachel Jones's exquisitely louche performance. She becomes a narrator for the play – and, at a standing microphone, speaks three new monologues (penned by Witzel) that carry us clearly through the play.

Witzel's staging is influenced by continental European approaches to the classics in other ways. He has the cast comically clump together for certain scenes, moving about as a non-naturalistic whole that highlights the pressure to conform in this society (particularly to gender stereotypes). Teresa Przybylski's set is a mismatched collection of chairs that are moved about to delineate space, toppled over and, at one point, mowed down with Schaubühne-style gusto.

The sound cues can be a bit much – with overused (and overly loud) electronica interludes. And there are some elements that tease the edges of family-friendly. A notable prop – used to cure the French king, and torture Parolles – is a drill with a butt-plug attached to the end. But I suspect it'll go over kids' heads. (And if it doesn't, well, it's not really this show's fault, is it?)

Otherwise, I found this an eye-opening (and entertaining) production that redeemed a much-maligned play.

As mentioned, Hamlet is also running in High Park this summer.

Frank Cox-O'Connell plays him as a gloomy hipster in a Hulk T-shirt. He's a cutter, too. Not too far into the show, he sits down on the edge of the stage, pulls out a razor blaze and slices into his arm: "To be or not to be."

At this moment on opening night on Thursday, the skies opened up as if to answer: "Not to be." The rain poured down and umbrellas opened up while Cox-O'Connell made it through the most famous speech in English-language drama. I was mightily impressed he did – and, even more so, that Rose Tuong's sweet, natural-sounding Ophelia came on afterwards. The two got through the "get thee to a nunnery" scene soaking wet before a stage manager called the show.

I can't really review director Birgit Schreyer Duarte's production based on a rained-out 45 minutes, but I was sorry to see it come to an end. Again, it's a production with much cutting and reshuffling that will annoy purists.

Hamlet is the only one to see the ghost of his dead father here – the sentries are gone, while Qasim Kham's videocamera-toting Horatio only humours him about it. Dr. Rosencrantz (Raechel Fisher) is a therapist sent for by Claudius and Gertrude. Hamlet speaks to her while reclining on a cushion. "There is nothing either good or bad, but thinking makes it so!" he says, as if having a real epiphany. Then: "Is this a free visitation?"

That made me laugh out loud. So did Alon Nashman's Claudius, in his first entrance, waving at the audience and shouting, "Merci à tous!" I was waiting to see if Duarte's twists and jokes would bring me closer to the play – or if the cleverness would continue to keep me at a distance for it. I'll have to go back to find out.

Soulpepper presents The Just, a classic tale about the cost of extremism
March 4, 2016 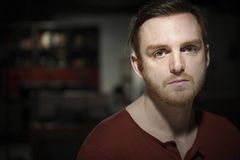 Theatre Review
Trump turning you into a grump? Matilda is the show for you
July 8, 2016 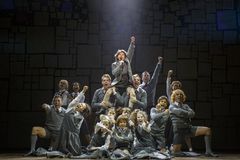