The English Theatre at the National Arts Centre is in transformation: Siminovitch Prize winner Jillian Keiley has been artistic director since summer, but Peter Hinton's final season is still playing itself out.

Metamorphoses, a literally splashy staging of half a dozen of Roman poet Ovid's myths, is a snapshot of the Ottawa institution in mid-morph; it's a show selected by Hinton, but the one that is introducing Keiley and her directorial talents to the centre's mainstage.

The St. John's director makes a great first impression. Gasps greet Bretta Gerecke's two-level set, which resembles a Roman bath crossed with a modern-day spa. It features a pair of water-filled pools: a shallow one for actors to wade into on the (reinforced) stage and a glass dunk tank up above allowing peeks of underwater secrets.

The NAC English Theatre Company dives into these slippery environs. Veteran actor Rosemary Dunsmore is as game to get wet and wild as impressive National Theatre School grad Ishan Davé, who at one point sinks sullenly down to the bottom of the deeper pool to smoke a cigarette in an ingenious image.

Chicago playwright and director Mary Zimmerman first devised Metamorphoses and its watery concept in a production that evolved into an unlikely Broadway hit in 2001.

While the show is recommended for age 16 and up, Zimmerman for the most part avoids the darkest corners of Ovid's mythical universe – for example, the more violent and disturbing stories of rape, mutilation and cannibalism that inspired Shakespeare's Titus Andronicus (and Canadian playwright Erin Shields's If We Were Birds).

The most unsettling it gets here is the incestuous tale of Myrrah (Alix Sideris, in a wrenching performance), who shuns Aphrodite and so is cursed with an unnatural desire for her father Cinyras (Andy Massingham). She tricks her father into blindfolding himself and accepting a young, mute lover in his hot tub – and the two twist and turn in passion before the inevitable moment of recognition leads to a more violent physical interaction. Afterward, Myrrah runs into the wilderness calling upon the gods to transform her into something, anything else but her tortured self.

Everything comes together in haunting fashion in this sequence. Keiley's sensual, then shocking staging is supported by Leigh Ann Vardy's opaque lighting and Jonathan Monro's eerie score, played on glass marimbas called aquarions or by rubbing fingers along the rims of crystal glasses.

There's something here that suggests that what we're watching is actors swimming around in the amniotic fluid of Western civilization – even if you don't know the details of these stories, they resonate deep down.

King Midas, whose touch turns everything to gold and whose story begins the show, is played large and for laughs (that don't quite materialize) by Joey Tremblay. But Midas's opening tale – which neatly illustrates that you should be careful what you wish for – is poignantly contrasted with the concluding tale of Baucis and Philemon, a generous couple who are granted one desire by the gods and who choose more wisely. They decide to die together at the exact same moment – and as actors Dunsmore and David Francis hold each other and become trees with branches intertwined, Keiley's production ends on a high note.

Not everything is as smooth sailing, however – and often the aural and visual murkiness is simply murky. A constant rain of water tumbling down on the upper level of the set is one misjudgment; Its aesthetic value is cancelled out by the damage it wreaks acoustically and the suggestions it sends to bladders in the audience (particularly since there's no intermission).

Missing most of all is a sense of flow. Zimmerman's script is a mix of styles and tones – and Keiley doesn't navigate these choppy waters altogether confidently. (I wonder if fears of slipping on a wet floor meant choreography was kept minimal?)

The NAC company, as always, comes across as less integrated than those at the Shaw or Stratford festivals, though truth be told it didn't bother me as much this time. Perhaps I'm warming to what could be considered a distinctly Canadian artistic approach, a company that's more of a mosaic than a melting pot. 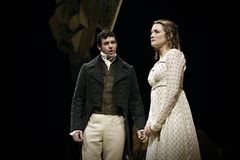 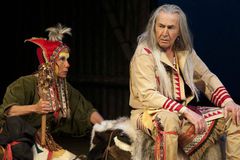 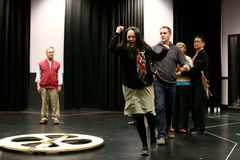 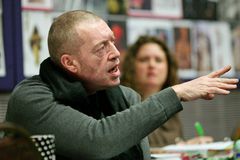 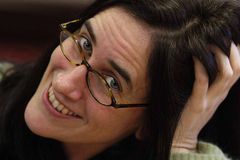